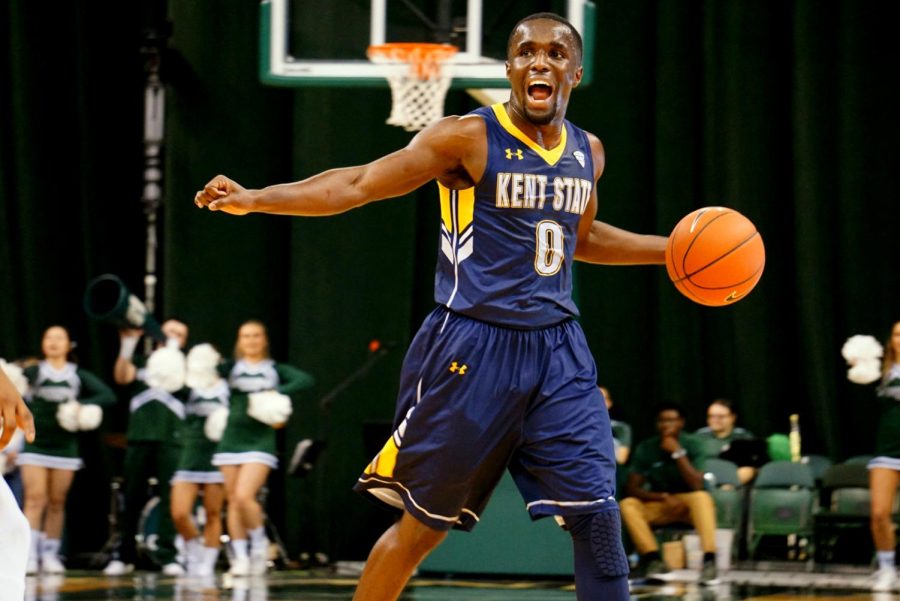 Senior guard Jalen Avery coordinates the offense during Kent State's 83-79 victory over Cleveland State on Nov. 10, 2018, at the Wolstein Center. Avery led the Flashes with 23 points.

Effort, particularly on the defensive end, was how the Flashes separated themselves from the Broncos’ lengthy starting five.

Western Michigan touts one of the two seven-footers in the MAC, one of them being Seth Dugan, its starting center. The Flashes were able to contain Dugan for much of the first half, forcing two turnovers and four missed layups, while limiting him to three rebounds.

Junior forward Phil Whittington became a force inside the paint, blocking two shots in the first half. Whittington made his presence known on the boards, finishing with a career-high 15 rebounds, including six on the offensive end.

Senior guard Jalen Avery climbed out of his recent slump, finishing with 12 points on 4-for-6 shooting. He also had a season-high eight assists and a career-high seven rebounds. He didn’t record a turnover for the eighth time this season.

“(Avery) got his nose into things,” assistant coach Julian Sullinger said. “Coach Senderoff challenged him to make those toughness plays. They all stepped up to the challenge today.”

The Flashes also dominated in fastbreak points, finishing with a 35-10 advantage. Avery consistently pushed the ball up the floor leading to easy transition layups by junior guard Antonio Williams. Williams finished with 14 points on 6-for-7 shooting in the first game this season in which he came off the bench.

Senior guard Jaylin Walker and junior guard Kain Harris each started for the first time this season. Harris finished just 1-for-4 for three points in his eight minutes. Walker on the other hand, finished with 23 points on 8-for-19 shooting with five assists.

“The huge thing is the 5 assists,” Sullinger said about Walker’s play. “The ball has energy, the more you share the basketball the more you will receive.

Kent State faced a challenge in the second half after they saw an 18-point lead shrink to just four with 13 minutes left after a barrage of three’s by freshman guard William Boyer-Richard.

“We knew that we had to get back to team stops on the defensive end,” Sullinger said. “Early in the second half we got away from that and it showed. After we locked back in it showed as well.”

Kent State will look to secure their second conference win of the season when they take on Eastern Michigan (7-8, 1-1 MAC). The Eagles are coming off an 84-82 win against Ball State (10-5, 1-1 MAC). Tipoff is set for Saturday at noon inside the M.A.C. Center.