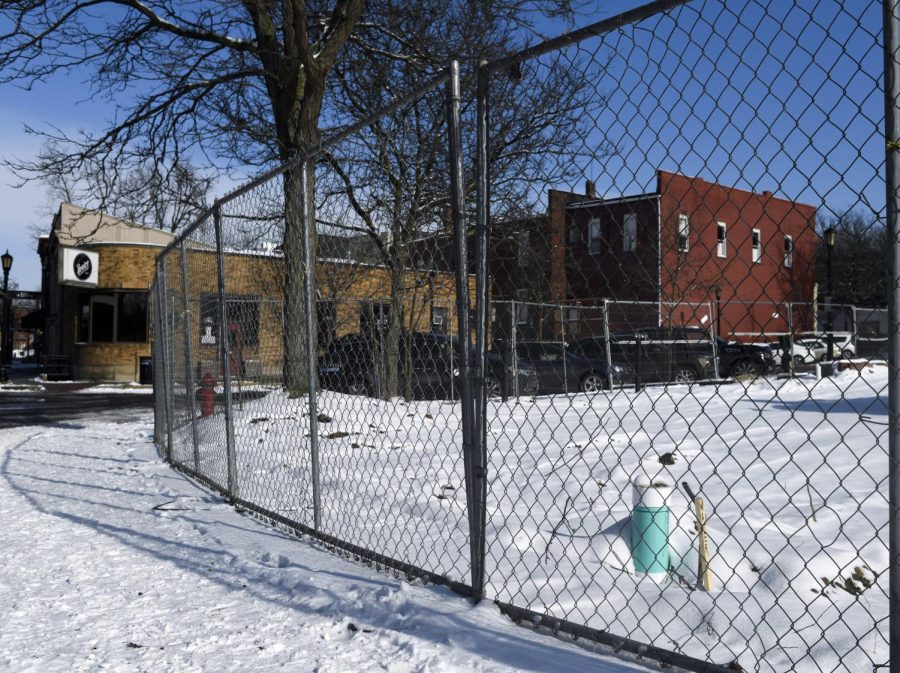 The former location of Mugs Brew Pub, the now empty lot sits on the corner of Franklin Ave in downtown Kent on January 13

After several months of inaction at the vacant lot on the corner of Erie Street and Franklin Avenue downtown, an excavator filled a large hole with dirt — the place that used to be Ramella’s Pizzeria.

But this wasn’t the beginning of construction on the six-story, mixed-use building planned for the site.

In fact, construction on the building was delayed until spring and filling in the hole was a requirement for safety code.

“When a structure is demolished, the excavated site, which basically would be the open space left, needs to be filled to grade,” said Bridget Susel, the Kent community development director.

The former two-story building on the site was demolished in May. That building included an apartment and two business spaces, most recently occupied by Ramella’s Pizzeria and Mugs Brew Pub.

The delay comes after property owner Badreeyeh Alhasawi and her husband Manouchehr Salehi stopped working with the architectural firm, DS Architecture, and began transitioning to a new firm.

Susel said the city won’t know the name of the new architectural firm until the firm submits plans to Kent’s building services department , but she said the firm is currently reviewing the building’s plans.

If any changes are made to the site plan or the building’s exterior, the new plans would have to be approved by Kent’s planning commission and architectural review board, but Susel said there is no indication changes will be made.

“The site plan is how (the building) is located on the site, like ingress, egress and all those aspects. The architectural review board looks at the aesthetics,” Susel said. “It is my understanding that those are not going to change, so those reviews will not occur. They’re basically going to submit plans for construction review.”

The building’s original plans call for a six-story, mixed-use structure, including a bakery and cafe on the first floor, a high-end restaurant on the second floor and 16 luxury apartments above that.

Assuming the site plans or exterior aren’t changed, the next step is for the architectural firm to submit building plans to the city for technical review, where they will determine if the plans meet the Ohio Building Code.

But this isn’t the only tall building in the works downtown.

At the adjacent site on Franklin Avenue, plans for a second six-story building remain on track. The “West End” building will contain exclusively apartments — a combination of micro-units and larger options. That building, developed by Cleveland-based Fairmount Properties, which Susel said is expected to begin some time this spring.

The site will have to be cleared before construction, meaning the now-vacant Buffalo Wild Wings restaurant will be demolished. Susel said Kent’s building department hasn’t received plans for the project, but Fairmount Properties is working to finalize their plans.

Fairmount is the developer behind four other downtown buildings, including the Ametek building and the Davey building.