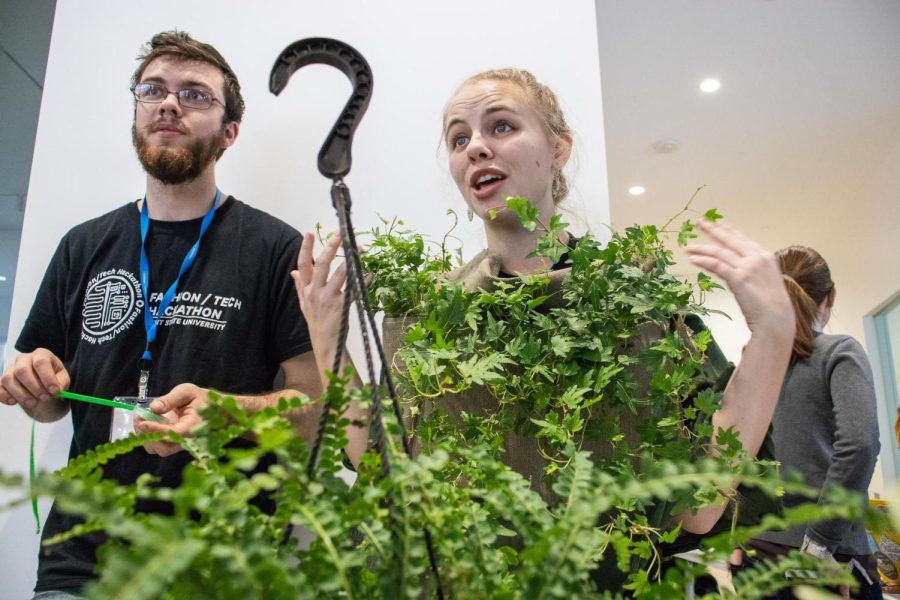 Sidney Cannon-Bailey, an engineering grad student from the University of Pittsburgh, suits up in a blouse decorated with plants to show how they can be seen as a technology and that being around them improves the quality of one’s life on Sunday, Jan. 27, 2019.

From headbands that track a baby’s temperature to jackets covered in plants, the variety of products presented at this year’s Fashion/Tech Hackathon was vast.

Students from across the nation gathered in Rockwell Hall from Jan. 25 to Jan. 27 to compete in a 36-hour contest aimed to develop innovative ideas that combine fashion and technology.

As participants arrived, sleeping bags, pillows and blankets began filling the corners of classrooms, including a room on the first floor filled with rows of cots in preparation for the inevitable naps of tired hackers.

One hundred and twenty-eight participants from 35 universities competed in teams of one to five for a piece of the $4,100 in prizes. One of the awards included a gift certificate to Kent State’s Fashion School Store (FSStore) in downtown Kent that sells unique clothing made by faculty, students and alumni. Prizes of varying amounts were awarded to teams based on the category they won.

Each team’s goal was to create a unique piece of wearable technology to present at the project expo judged at the end of the weekend. Teams had from 8 p.m. Friday to 8 a.m. Sunday to think of their idea and complete a prototype.

After the opening ceremony on Friday evening, participants were given 30 minutes of “speed networking” to scout out suitable team members. Teams enjoyed a “make your own fajita” bar before the 36 hours of hacking began promptly at 8 p.m.

Elena Blaginykh, a graduate student in public health, wanted to create a product that would be both beneficial and convenient to infants and their parents. She and fellow members of her team thought to make headbands for babies that have a built-in thermometer to consistently track the infant’s temperature.

“This way, you don’t have to worry about measuring the infant’s temperature all day. The data goes directly to an app on your phone and you can forward that information to the child’s doctor,” Blaginykh said. “If the baby’s temperature even approaches a fever, parents can quickly intervene.”

Teams had access to all of the tools the Fashion School’s TechStyleLAB and SPARK Innovation Studio have to offer, such as 3D printing, vinyl cutting, laser cutting and industrial knitting along with the help of fashion and tech mentors.

However, not all teams needed these resources as some only needed the knowledge they already had.  Ben Holland, a senior computer science major, and his team put their coding skills to use to create a website called “Upcycle.” The purpose of the site is to be a platform to educate people on how to reinvent a used piece of apparel they already own.

“There are a lot of fashion students that are already really into processes like this. We’re trying to create a platform for those fashion students to show off their work and by doing so, hopefully empowering them and giving them some networking opportunities,” Holland said.

Some teams simply wanted to send a message. Sidney Cannon-Bailey, an engineering graduate student, and Jay Maier, a junior engineering major at the University of Pittsburgh, created the “Life Jacket,” a jacket that had plants in all of the pockets. Cannon-Bailey and Maier had a different take on what technology is.

“If I were to create something and say, ‘hey look, this machine can filter air and create oxygen,’ then people would consider it technology,” Cannon-Bailey said. “But plants already do that. Plants are technology. The Life Jacket is a way we can bring awareness to the importance of nature as technology.”

Whether participants stayed awake for the full 36 hours or went home each night to shower and rest, the overarching trend from the weekend was students’ excitement to meet new people and do what they love.

“You get to talk to people that aren’t in your field of study that you would have never talked to before,” Elizabeth Tarleton, a senior fashion design major, said. “I would never have met some of my good friends if it wasn’t for this event

Winners were chosen in five categories with nine winning teams in total taking home a share of the prizes. The three categories teams entered themselves to be judged on were: Best Concept that Addresses User/Customer Experience, Best Implementation/Creation of Wearable Tech to Solve a Problem/Need and Most Visually/Aesthetically Compelling, each of which only had one winning team. Two teams were awarded the FSStore Award, which was a $50 FSStore gift certificate and a sweatshirt. The category all teams were automatically entered into is the Most Market/Venture Potential, which is awarded to four teams that show market promise.

Before packing their things and heading home to rest, participants stuck around to hear the winning team of each category at Sunday’s closing ceremony.

Although not every team won, the weekend was packed with ideas, creativity, laughter and bonding experiences.

“Before this, I had only ever seen a hackathon, never competed,” said Luke Leyden, a freshman computer engineering major. “They are crazy. But it’s really fun to just make something cool with your friends.”

Sophia Iannelli covers fashion. You can contact her at [email protected]