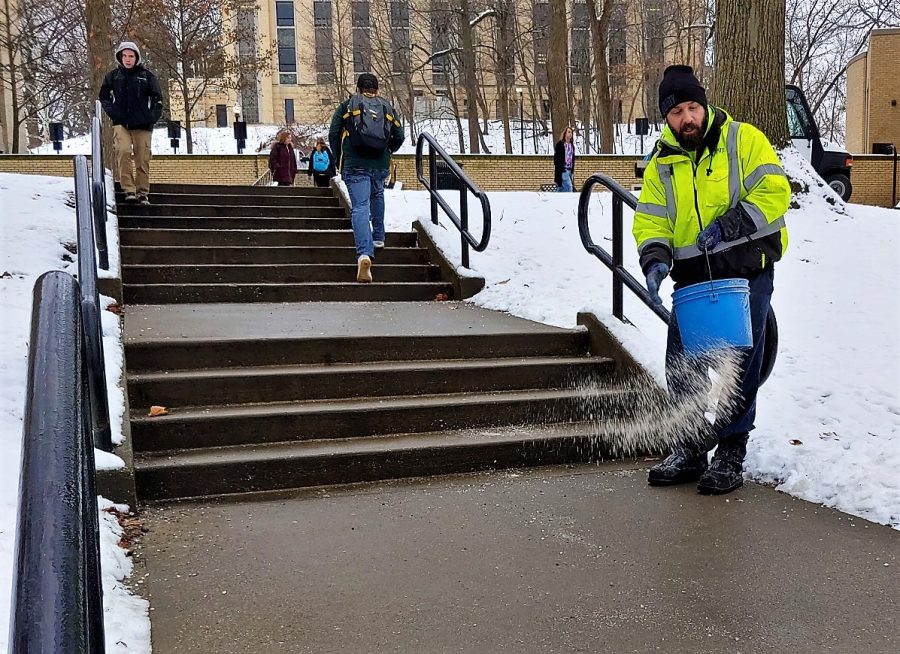 Each winter, Kent State groundskeepers use between 1,200 to 1,500 tons of rock salt to combat snow and ice.

Heather White, the manager of University Facilities Management, said each building on campus has either a grey or white bin, or a blue barrel. The groundskeepers use these to store the salt deposited on sidewalks, steps and walkways.

“We’re smart and disciplined with usage, even with expansion,” White said. She was unable to comment on how much the university spends on rock salt.

Salt, the compound of sodium chloride (NaCl), accelerates the melting process of snow or ice because it has a lower freezing point. When salt is put on the ice, the salt melts into water and remains over the ice, according to Scientific American.

As the ice melts, more liquid water is released, which dissolves more salt, and so the cycle continues.

While salt is successful to use in combating icy steps and sidewalks, there are significant impacts on the environment.

The salt thrown in the winter can affect water, vegetation and even pet health, according to the New Hampshire Department of Environmental Services.

When the snow melts, salt usually flows with the water, infiltrating groundwater, storm drains or rivers. This causes a spike in chloride levels, rising to more than 800 mg/L. This is a significant rise compared to the normal level of one to 10 milligrams per liter.

In 2009, salt contamination from two road-salt piles in Camden, Ohio, tainted groundwater that drained into three wells and forced the town to find a new source of water.

In a similar fashion, rock salt affects vegetation life. Salt can damage plants both in the foliage and in the roots. Because salt dehydrates plants, it can disrupt the nutrition flow. In extreme cases, it can take out species that are not salt-tolerant, affecting species diversity.

NaCl also affects animal life, even domestic pets. Salt can crack a dog’s paws, leaving them inflamed and prone to infection. If ingested by licking the salt itself, or salty paws, dogs face physical illness. Dog owners should wipe off paws and coats to remove salt, sand or other chemicals, according to the American Society for the Prevention of Cruelty to Animals.

White is aware of the challenges but believes Kent State is being smart with its usage.

“Nobody is ready to be rock salt-free,” she said. “We need to make sure the university is safe and passable.”

In addition to rock salt, groundskeepers also use ice melt, which is less corrosive than salt with potassium acetate. Rather than melt the surface ice, potassium acetate breaks the bond between the snow or ice, and the concrete.

She said the effects vary depending on the type of spring as well. If there is an abundance of rain, the salt works through the soil rather than remaining compact.

The university  also pre-treats using a liquid brine salt, which keeps snow from matting onto the sidewalks and makes removal easier, White said.

Andrew Britton, a full-time groundskeeper for the past two years, was placing pre-melt outside Franklin Hall and said the hardest thing is waiting for foot traffic — students walking in groups up or down the stairs.

Even with the environmental implications of NaCl, White said they are not looking to replace what they use.

“We’re smart about it, but (salt) is still the most effective tool, you need all the tools in the toolbox,” White said.