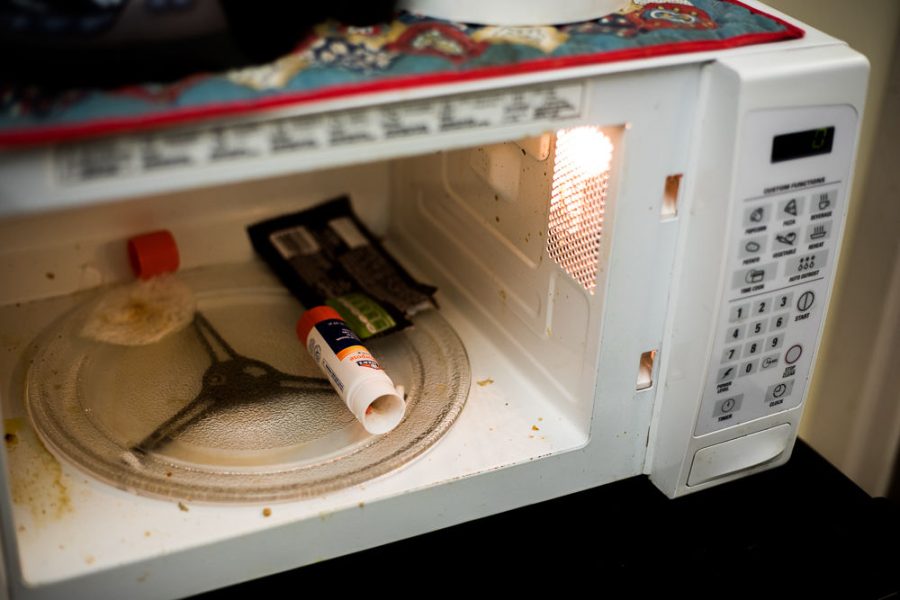 The remnants of a candy wrapper and a glue stick sit inside a microwave in Satterfield Hall on Tuesday, Dec. 18, 2018.

Satterfield Hall on Kent State’s main campus was vandalized Sunday evening with a swastika drawn on a window with a glue stick, feces left on the ground and several microwaves broken.

KentWired requested the incident report from university police on Tuesday. While a physical or digital copy of the report hasn’t been sent, the university police said the suspect has not been identified and the extent of the damage was unknown.

Students, staff and faculty are upset about the situation and took to social media to condemn the incident and voice their anger and concern.

“We are shocked to hear about this act of hate, vandalism, and anti-Semitism that occurred on our campus. Jewish students, parents and friends are encouraged to reach out to our staff if they need a listening ear or have questions during this difficult time. We are in communication with our partners at Kent State, the ADL, and the Jewish Federation of Cleveland to combat this hate and ensure an action like this does not ever occur again. Hillel at Kent State condemns this and all acts of anti-Semitism.”

The Jewish Studies Program at Kent State also responded on Facebook and wrote, “This is such an ugly act of anti-semitism and vandalism. Turn from evil and do good; seek peace and pursue it.”

The staff and faculty in Satterfield Hall, which houses the English department, were upset and saddened when they heard about the situation.

Matthew Shank, a professor for the Department of English, heard about the act from his office mate, Elizabeth Howard. Howard, who is also an English professor, told him about their burnt-out microwave.

At first, Shank didn’t think anything of it.

“At that point, we didn’t realize that this was part of a more deliberate and widespread act,” he said.

Shank then received an email from Robert Trogdon, the chairman of the English department, about more details of what happened Sunday evening, which made him angrier.

Trogdon told KentWired Tuesday custodians walked into Satterfield Hall on Monday morning to find a swastika drawn on a glass window, feces on the floor and broken microwaves in department lounges.

Sophia Hayden, a junior classics major at Kent State, took Hebrew this past fall semester with several Jewish students. While she isn’t Jewish herself, Hayden was still saddened to hear what happened.

Shank and Hayden said even though the investigation is still underway, the Kent State community will condemn acts of hate on campus.

“Most of us teachers and students here at Kent State, our second home, … anytime something like this happens, we are sickened by it,” Shank said. “But we won’t live in fear. We will continue to fight through education the kind of ignorance that often prompts this kind of destructive activity.

“Love will always win and I know it will in this case,” Hayden said.