Study Abroad: The missing piece of a sustainable Kent State 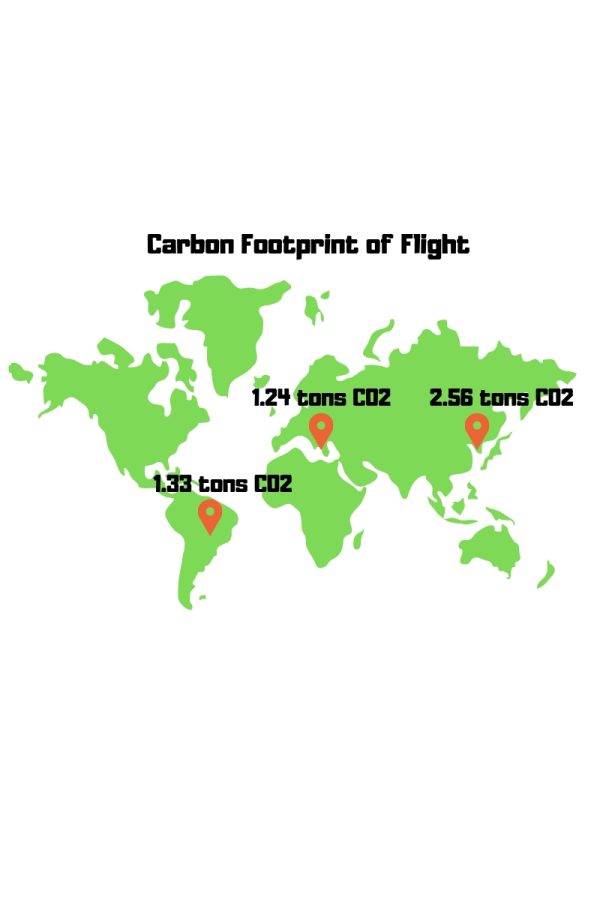 Kent State’s study abroad programs sent 1,329 students overseas in the 2017-18 school year, which means over six million pounds of carbon dioxide were released into the atmosphere from their flights alone.

Commercial flights accounted for seven percent of the U.S.’s 2018 transportation emissions, according to a 2018 study by the University of Michigan.

A roundtrip flight to Florence, Italy, (the location of Kent State’s largest international program) with a layover in London produces an estimated carbon emission of 1,240 pounds of carbon dioxide. Smaller programs that are farther away, like Kent State’s partnerships in Brazil and South Korea, have even greater emissions.

The 2015 Paris Climate Agreement set a goal to keep global temperature rise at a maximum of two degrees Celsius. The introduction of mass quantities of carbon into the atmosphere would only hasten an increase in temperature as, according to National Geographic, carbon dioxide is the greenhouse gas with the greatest impact on heating the planet.

The sustainability department has a number of initiatives to protect and restore the environment on and around the Kent campus, including engineering wetlands, constructing energy-efficient buildings and creating convenient ways for students to recycle. It has not, however, considered the impact of students going overseas to study abroad.

Large numbers of international students are welcomed to study abroad at Kent State each year, which further adds to the number of globe-spanning flights students take.

Collaborating to put images instead of words on trash disposal containers to combat language barriers and ensuring international students have access to rideshare transportation are some of the few ways the sustainability department has interacted with the Office of Global Education, Knowles said.

The Office of Global Education has also never considered the environmental impacts of studying abroad.

“This is the first time in which someone brings it up in a conversation about work I’ve been doing for years,” said OGE associate provost Marcello Fantoni.

Several U.S. institutions, like the University of Denver, offer students a carbon-offset option for their study abroad flights as a solution. Carbon-offsets are $15-$25 fees that go toward funding green initiatives, such as renewable energy projects and cleanup projects that, theoretically, cancel out the carbon emitted from flights.

Since Kent State has never considered the carbon footprint of its study abroad endeavors and the number of students going abroad rose by seven percent last year, nothing is being done to compensate for the millions of pounds of carbon added to the atmosphere.

“If you want an answer about what we will do, I don’t have an answer,” Fantoni said.

Despite this, there are ways in which Kent State’s international programs do promote sustainability, said Amber Cruxton, the associate director of education abroad. There are study abroad courses and programs with an emphasis on environmental issues, as well as rules the specific schools abroad may have.

“While we don’t necessarily do anything aside from those courses that are specifically focused on sustainability, the institutions that they’re going to likely have (sustainable) efforts in place,” Cruxton said.

Cruxton also believes the lessons learned from studying abroad can show students worldly ways to think green, like learning how to navigate public transportion and seeing how other cultures reduce consumption.

“When I go to Italy, for example, the way they dispose of their trash and recyclables is so much more developed than what we’re used to here,” she said.

The Kent State Environmental Society doesn’t work on projects related to studying abroad, but its president and junior accounting major Abigail Braden thinks the university should not only prioritize all aspects of sustainability but should also inform students about its environmental impacts.

“They do encourage everyone to study abroad because it’s a life-changing event,” Braden said. “But I think that is something to take into consideration when studying abroad.”

Braden also believes it’s hypocritical to harm the environment while sending students overseas to explore it.

“We all love the Earth, and if we’re not sustainable, we won’t have it,” she said.

Fantoni sees the environmental aspects of study abroad as an opportunity for improvement.

According to Kent’s sustainability department, Kent State reduced its energy consumption by 15.9 percent since 2004. Kent aims to make the new business administration building LEED certified and offers students reusable food containers, so the next step could be related to international travel.

Sending so many students abroad is the right thing to do, Fantoni said, but it should be done with the lowest impact possible.

“If I’m doing this with the right intentions but I’m still hurting you, that’s not right,” Fantoni said.

Madison Patterson is the international students reporter. Contact her at [email protected]