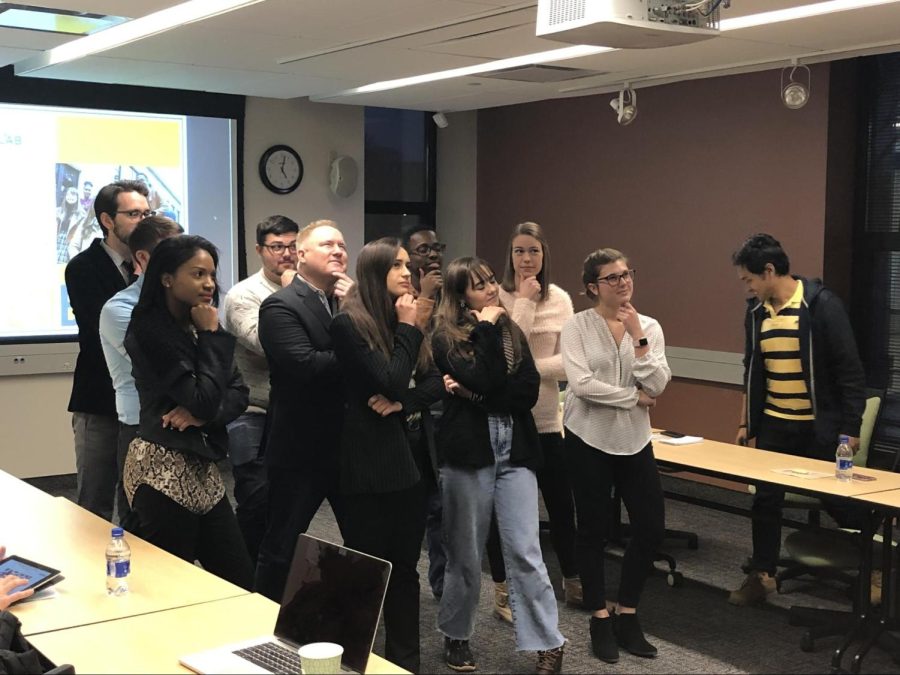 The finalists of the FlashLab pitch contest strike a pose before giving their presentations.

Each of the winners of Thursday’s FlashLab Innovation Pitch Contest hopes their plans will be successfully implemented into their respective student media outlets.

All three winning groups believe their ideas promote collaboration among student media and present a solution to a problem in student media that those outlets didn’t necessarily know existed.

Grand prize winner Carter Adams spoke passionately about wanting to ensure that student journalists are doing everything they can to be safe.

“I don’t like journalists getting killed and injured doing their job,” said Adams.

Carter Adams, a junior journalism major and Kent Stater photographer, won first place and a prize of $500 for his pitch “Safety Security Workshop.” The pitch outlines a 4-day intensive workshop that is dedicated to properly training journalists on being safe when they are covering dangerous events in the field.

“We go into these situations to tell the story and tell what’s going on in the world. We’re not there to be a medic first,” Adams said. “But it’s important to have the training because if you are the first one there, you’re not just going to write or take photos – you’re going to help.”

Adams was inspired by the story of Tim Hetherington, a photojournalist who was killed in 2011 while covering the Libyan Civil War during a mortar strike.

“Tim Hetherington had a wound that he could have been saved from, but the photojournalist with him and the fighters with him didn’t know how to do it so he bled out and died,” Adams said. “I heard that and wanted to make sure that if I got hurt or someone else got hurt I would know what to do.”

Adams believes that this sort of program is vital to student journalists at Kent State and at universities around the country and wants all students to be as prepared as possible for these situations.

“We’re doing this every day. Not every day will be a dangerous assignment but someday it will come up. We need to be prepared for that.”

Natalie Meek, a senior public relations major, won second place for  her pitch of “Connections,” a PR agency that serves all 10 affiliates of Kent State Student Media. The idea behind her pitch was starting an agency that can handle the marketing responsibilities and take the pressure of marketing their events off the individual groups.

Meek’s idea is to let “Connections” be a third-party to the different student media groups.

“The idea of our firm is to better establish a connection between the 10 student media groups and make sure that promotional and marketing materials are being shared in the best way,” Meek said.

Meek plans on having three public relations majors hold paid positions to handle the promotion and marketing that the agency is tasked with.

“It’s going to be about us understanding where these groups are, what we can do to help them, what they really need from us and deciding the most reasonable way to approach those issues in the short and long-term,” she said. “This is a 360-degree plan of attack for problems in student media.

One of the issues Meek foresees is student media not wanting to reach out for help from the agency, possibly seeing it as just another responsibility that they won’t have the time to deal with. Meek however stressed that is not the case, that “Connections” is designed specifically to take work off of the  shoulders of leaders in student media.

“We aren’t anybody that they have to report to, we are an asset to them,” said Meek.

The agency will do extensive research of all 10 student media groups to identify any issues that they might have and come to the groups themselves offering help in hopes to combat the possibility that the organizations might not reach out to the agency for assistance.

“I do think it will be a process so I think once we establish that and tell them we’re there to take work off of their shoulders not to add more work,” Meek said.

“Connections” plans to start working with different groups next semester.

Shoot The Gap is an initiative that encapsulates the collaboration FlashLab has preached since its inception this semester.

The pitch was developed by Cameron Gorman, the editor-in-chief of Luna Negra and a Kent Stater columnist and Anna Katsas, the president of Kent State University Independent Films. Luna Negra and KSUIF would team up to take a poem or short story and produce it into a short film using the resources KSUIF can offer. KSUIF would then write a script and film the video.

This film would then be presented inside of the issue of Luna Negra using an augmented reality patch. There will be a “trigger image” inside the magazines printed on the page. To scan the image, you take out your phone using a certain app and the content will pop up on your phone immediately.

“Their idea is fun and interesting. I’m really curious to see how they use new technology to drive audience and drive readership,” said Kevin Dilley, the director of student media.

Marketing Luna Negra will continue to be a focus as they hope to increase readership and make this pitch successful by getting it to as many readers as possible.

“I would say we’d definitely be successful if we are able to get the augmented reality patch in the magazine and even more successful if we do it again next year as well,” said Katsas. “I would also like to see more collaboration across the different outlets of student media. I’m hoping our project will inspire other students to want to collaborate and make something new for themselves.”

Jacob Majka is the CCI reporter. Contact him at [email protected]