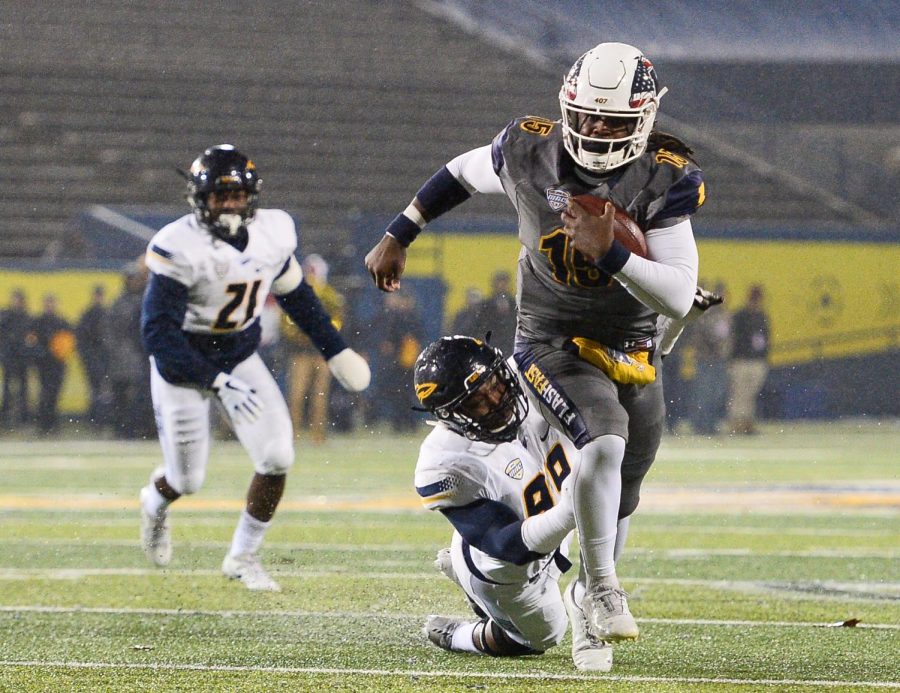 Kent State Golden Flashes quarterback Woody Barrett carries the ball out of the tackle of Toledo Rockets defensive lineman Tuzar Skipper in the first quarter of Thursday's game at Dix Stadium. Barrett scored on the play.

The Kent State offense was rolling early on after sophomore quarterback Woody Barrett eluded two Toledo defenders on a seven yard touchdown run that gave the Flashes a short-lived 7-0 lead.

The drive included a 35-yard pass to junior wideout Mike Carrigan. This was their fifth connection of 30 or more yards this season.

“We practice (deep balls) everyday,” Carrigan said. “I know if I just get my release Woody’s going to put the ball in my hands.”

Toledo responded on their opening drive with 31-yard run by backup running back Art Thompkins to tie the game, 7-7.

The run game was there all day for the Rockets as they finished with 384 yards and four touchdowns.

The Flashes’ inability to stop the run, particularly on inside runs, was a concern all game.

“They did a nice job with their gap schemes and their counter and their power,” coach Sean Lewis said. “There were just some things where we were a little over-aggressive, over ran some of the holes. They did a really good job of what they were doing. There’s a reason they are defending conference champions.”

Toledo’s second drive of the game included more impressive running. Running back Bryan Roback took off for a 51-yard gain before junior cornerback Jamal Parker wrestled him down on the Kent State 29-yard line. The Rockets would score six plays later on a three yard touchdown pass from quarterback Eli Peters to tight end Reggie Gilliam to give Toledo a 14-7 lead with 4:39 left in the opening quarter.

The game was back and forth for the remainder of the half with Barrett and Carrigan connecting again, this time on a 37-yard pass to set up a score midway through the second quarter. Toledo held the 28-17 lead heading into halftime after an 83-yard punt return from Diontae Johnson late in the half.

“We left the ball in the field of play too many times, and that becomes very tough for the cover team,” Lewis said. “We wanted to eliminate him, and obviously, we didn’t execute that plan to the best of our ability.”

The Flashes squib kicked every kickoff after the return in order to keep it away from Johnson.

The Rockets opened the second half on a strong note, driving down the field and scoring on a 15-yard touchdown run by Roback to extend the lead to 35-17.

The Flashes opened their first possession of the half with a Barrett interception that was returned for a touchdown by Toledo linebacker Tyler Taafe, giving the Rockets a 42-17 lead, ultimately pushing the game out of reach.

Kent State finished with 497 yards of total offense, the second-highest total the Flashes have put up this year.

“I don’t like the result of it,” Lewis said. “It doesn’t matter what the stats are. There’s no moral victories; we’re 0-1 today… Even though we played well in spurts we need to put together a collective ballgame where we put together four quarters in all three phases.”

Kent State’s final game of the season is Nov. 23 at Dix Stadium. Kickoff is set for noon against Eastern Michigan (6-5, 4-3 MAC).

Ian Kreider is the sports editor. Contact him at [email protected]