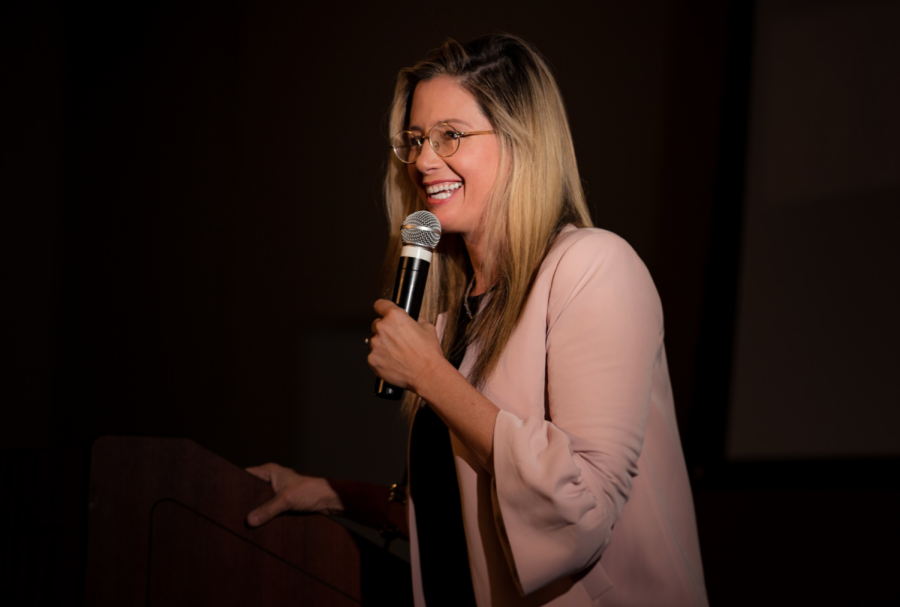 Academy Award-winning actress and advocate to end human trafficking Mira Sorvino told a crowd of students, faculty and the community about her experiences as an advocate and how to put an end to it.

After reading Anne Frank’s diary at age 10 and finding that her German nanny denied the number of people that had been killed, Sorvino realized that people in the world were forgetting or trying to change history. This lead to her becoming very anti-genocide. She has found that her whole life has consisted of the experiences such as this that have lead to her want to create change.

“All of these things live inside me and I’m determined for the next generations to live a different reality than the ones lived by former generations, including mine,” Sorvino said.

Sorvino also believes that if there is just awareness without action, there will be no change.

“If you just have awareness without action, it’s hollow,” Sorvino said. “It’s sort of like the one of a one, two punch. The second punch has to be change.”

Sorvino told the stories of many human trafficking victims that she had met and even befriended throughout the night. When working with the Blue Heart Campaign for the UN, she met with a former human trafficker who explained how they take women and keep them in the trafficking ring.

“He had a self-awareness of the evil that he did, but really he had almost no empathy whatsoever,” Sorvino said of the experience. “It was really stunning to see the coldness of his eyes as he explained her operation. It was like talking to the devil. It was just all matter-of-fact.”

Leaving the meeting, she felt empty and broken, but six months later she received a letter from an officer that had been working with the former trafficker to take down other traffickers. The letter stated to tell Sorvino that they didn’t know what she said to the trafficker, but he was so much more effective as an informant after the meeting and they were now taking down five major human-trafficking rings.

“I didn’t know I was going to have that kind of effect on him,” Sorvino said. “It was literally just my heart breaking in front of him over the trafficking victims. You never really know what you just being yourself is going to do.”

Before the speech, Sorvino spoke with local high school students via Google Hangouts. During this, she was asked what words of encouragement she would give to people who had experienced things such as trafficking or rape.

“There is a lot of love for you,” Sorvino said. “There is a whole world of people who will embrace you and support you and help you get through this. You have value and you have worth and nothing that can be done to you will take away that value of your heart and your soul and your spirit.”

Mira Sorvino was selected to take part in the Kent State Stark campus’ Featured Speakers Series. This event allows national and international experts in civil rights, politics, education, environmental activism, literature, and arts to come speak to students, faculty, and the community at the campus. A list of past and future speakers can be found on the Featured Speakers page of the Kent State Stark website.

Allyson Nichols is the Kent State Stark reporter. Contact her at [email protected]