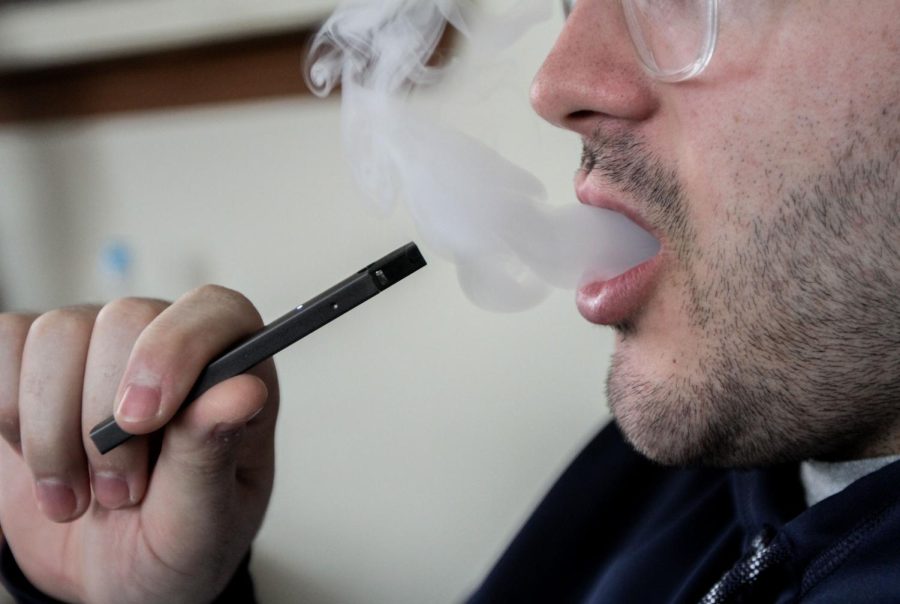 Ryan Jones smokes his JUUL at his apartment on March 7.

E-cigarette use is now being called an epidemic among youth, according to the Food and Drug Administration. The devices that can help adults quit traditional cigarettes are getting young teenagers addicted to nicotine.

In 2017, Kent State implemented a university-wide initiative for a smoke-free and tobacco-free campus. This involves students who live on campus and who are no longer able to use e-cigarettes in or around the dorms.

Three to four years ago, when e-cigarettes first became popular, the residence halls had seen a problem in the increase of false fire alarms, Brian Hellwig, the assistant director of residential communities, said.

Residence Services found the cause of many of these fire alarms was the use of e-cigarettes in dorm rooms.

“The way the fire alarms work, they are operated by a sensor or a laser, and so they can’t distinguish between smoke and steam or vape, and we saw a huge increase in the number of false alarms,” Hellwig said.

Residence Services prohibited the use of e-cigarettes inside the residence halls. A couple years later, in 2017, the university put in place its smoke-free and tobacco-free campus policy.

There have still been issues with false fire alarms since then, but it has dramatically decreased, Hellwig said.

According to a September press release from FDA Commissioner Scott Gottlieb, smoking remains the No. 1 preventable cause of death in America.

Kent State’s smoke-free and tobacco-free policy is a way to contribute in helping to one day solve that problem, especially now, among youth.

“This will no doubt involve a cultural shift over time as the campus community recognizes and embraces the new norm for KSU; such that, we are a Smoke-Free, Tobacco-Free University,” wrote Scott Dotterer, the coordinator of the Office of Health Promotion, in an email.

Despite the progress of e-cigarettes for adults, who sometimes use them to quit traditional cigarettes, what the FDA didn’t predict was the “epidemic use among teenagers,” according to Gottlieb’s press release.

The FDA calls it “an almost ubiquitous and dangerous trend among teens.” The FDA wrote it won’t let a whole generation of young people become addicted to nicotine as a trade-off for adults having access to those same products.

Paul Tyrpak, a sophomore business management major, started smoking e-cigarettes in March. He picked up the habit from his peers.

“I started in March of this year because my friend asked me to try his Suorin, which is another e-cigarette,” Tyrpak said. “I didn’t like it at first and I would always cough and stuff. And then I got the buzz the first time and I liked it, and I kept doing it. But your body takes time to get used to it, so I got sick a couple times.”

Tyrpak started using a Juul regularly on long drives and just hanging around, and now he feels addicted, he said.

A pod is what Juul, the e-cigarette brand, uses to hold its vape liquid instead of traditional bottles of juice used for vaping.

Tyrpak said he doesn’t have any plans to quit until after college. Tyrpak tried giving it up before, but not seriously, and it only lasted a couple hours.

When students use e-cigarettes in or around the dorms, the university takes an educational approach rather than a punitive one. When students are caught or documented, Hellwig will have a meeting with them.

“I use the meeting to get to know the student a little bit, see how they are doing academically, how they are adjusting to living in the residence halls,” Hellwig said. “Then, I will help the student to understand why we don’t permit vaping in the halls, how the smoke detectors can’t distinguish between smoke or vape and that the sensors are very sensitive.”

This is usually helpful for students in understanding why e-cigarettes aren’t permitted in the residence halls, Hellwig said.

Both Hellwig and Dotterer feel they have personally seen a decrease in overall smoking on campus. Hellwig said he sees many people going off campus to smoke.

“I can definitely say I see very little smoking out in the open on campus,” Dotterer said. “As more people become aware and are reminded of the policy, the level of compliance will no doubt increase.”

It is about developing a culture of health and wellness, Dotterer said. Having the smoke-free, tobacco-free policy is a step in the right direction to being a healthier campus and helping tackle the problem with nicotine addiction among youth.

Vanessa Gresley is the housing reporter. Contact her at [email protected]