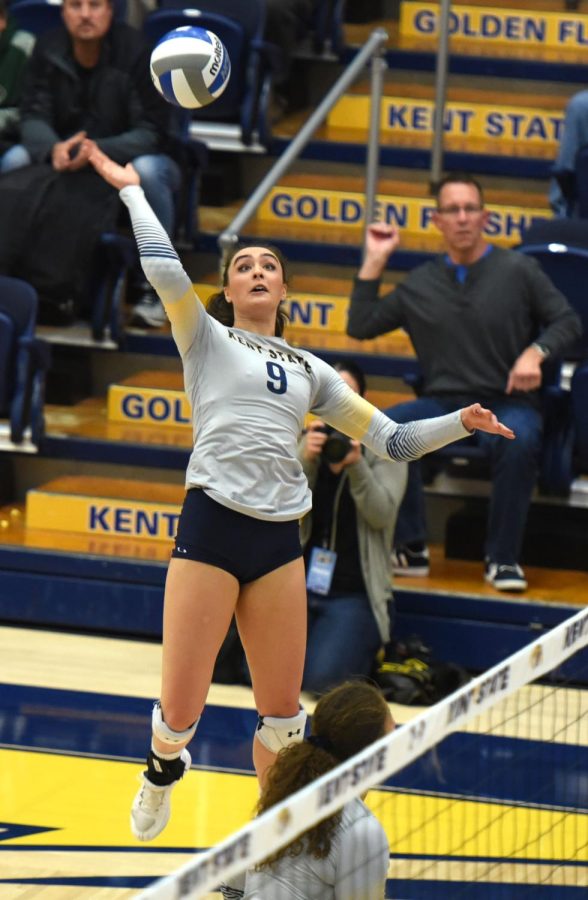 Kent State volleyball (13-15, 6-8 Mid-American Conference) had an up and down weekend, first falling to Buffalo, but beating crosstown rival Akron to end the weekend.

The Bulls started the first set up 6-3. The Flashes then tied it up at seven. It was all Buffalo from that point on as they won the set, 25-17.

Kent State quickly fell behind 8-2 into the second set. Buffalo decimated the Flashes in this one, as they won it 25-14, to go up two sets to none.

The third set was a little closer at the start as the Bulls were only up 8-7. The Flashes then surrendered five straight points as they fell down by six, 13-7. Kent State made a late run to cut the lead to three, 21-18. The Bulls were too much in the end as they won the final set, 25-18. Buffalo won both regular season matches.

The Flashes struggled everywhere in this one as only two players posted a positive attack percentage. Freshman Blocker Danie Tyson led the team in kills and points with seven.

Kent State started off well in this one as they scored the first five points of the match. The Flashes expanded the lead to 11-3 and eventually 16-6. Akron made it a lot closer in the end, but Kent State did enough as it won the first set, 25-21.

“Our middles and right sides had a great match. That was a big part of it and we adapted to what they were doing. The sets were pretty one sided wins for both and we did just enough to win,” coach Don Gromola said. “We have to get better defensively and all-around as a team if we want to win our remaining games.”

Kent State has two games left in the regular season against Miami on Friday at 6 p.m. and Bowling Green on Saturday at 5 p.m. Both matches are at home and the MAC postseason tournament begins on Nov. 15 in Oxford, OH.

Sean Belvins is a sports reporter. Contact him at [email protected]