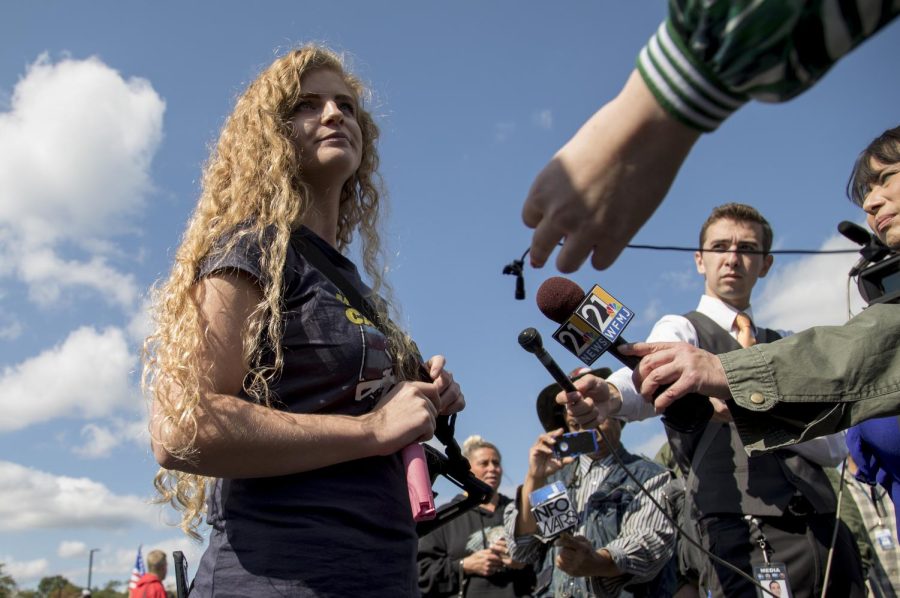 Kaitlin Bennett, the organizer of the open-carry walk, speaks to the press in the Schwartz Center parking lot on Sept. 29, 2018.

Liberty Hangout, a conservative student organization, filed a lawsuit against Kent State University for attempting to charge it security fees for an upcoming event.

The group asked a federal judge to bar the university from issuing security costs for the event, called  “Let’s Talk Gun Rights,” scheduled to be held in the Kiva on Nov. 19.

The event will feature Kaitlin Bennett, a Kent State alumna and gun rights activist, who organized an open-carry gun rights march at Kent State on September 29.

In the lawsuit, the organization said the high security costs curtailed its ability to hold the event.

In an email obtained by Cleveland.com, Dan Rudary, a lawyer from Brennan, Manna & Diamond, the Akron-based law firm representing Kent State, told Liberty Hangout the university’s security fees are reasonable, due to Bennett’s most recent event at Kent State.

Bill Becker, Liberty Hangout’s lawyer and president for conservative law firm Freedom X, said the group was billed at least $1700 by the university for security fees.

Becker also said this is a First Amendment and 14th Amendment lawsuit and wanted Liberty Hangout to be relieved of paying the costs.

“My clients deserve to be treated equally,” he said. “(Universities) shouldn’t cater just to left-wing groups.”

The walk hosted by Bennett on the university’s main campus resulted in four arrests and confrontations between gun-rights activists and counter-protesters.

Eric Mansfield, the executive director of media relations for Kent State, said the university has no comment at this time.

Check with Kentwired.com for more updates.