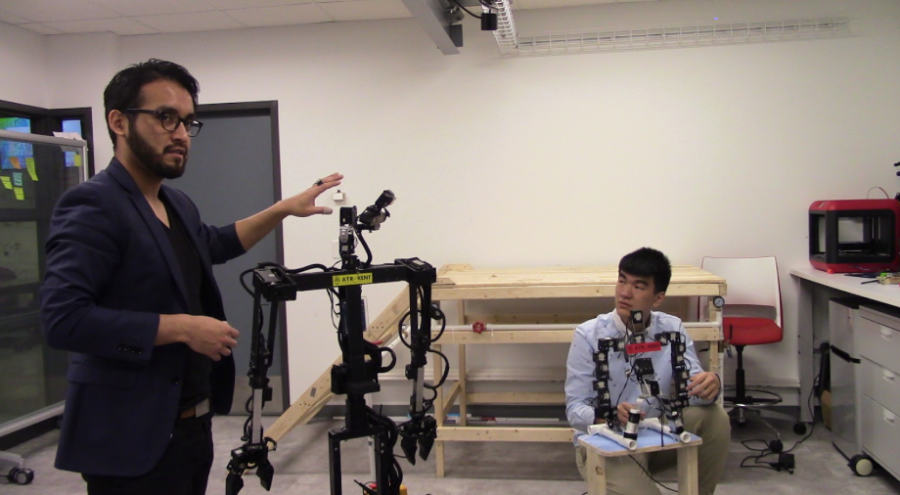 Led by Jong-Hoon Kim, an assistant professor in the department of computer science, the Advanced Telerobotics Research Laboratory created its latest robot, TeleBot 2.

Based off TeleBot 1, a robot designed by Kim and a group of researchers at Florida International University in 2012 to replicate human movement and perform tasks in remote environments, TeleBot 2 was built to be a stronger, more innovative version of its predecessor.

“One of the concepts we’re approaching is overall telepresence,” Cardenas said. “But it’s telepresence unlike what people currently expect.”

With TeleBot 2, Kim’s laboratory seeks to create a telepresence robot that enables users to get the full experience of being in a different environment without actually going there.

TeleBot 2 is controlled by a user wearing a virtual reality headset and a telepresence suit that was designed at the Fashion School.

“We try and retrieve the motion from a human and then that motion is retrieved and translated to the robot,” Kim said.

Developing TeleBot 2 posed as a challenge for the team because of the uniqueness of its system and design, said Gokarna Sharma, an assistant professor in the Department of Computer Science.

“The challenging part is the design,” Sharma said. “You have to design the system, and there is no such robot that is available for the stuff we are trying to do.

Members of the Advanced Telerobotics Research Laboratory traveled with TeleBot 2 to Tokyo for the World Robot Summit Oct. 17 through Oct. 21.

Along with eight other schools from around the world, the team competed in the plant disaster competition, which required robots to complete a series of inspections, including checking equipment and opening and closing valves.

Although Kim’s team did not win the competition, the members found the experience worthwhile.

“The World Robot Summit is a very intense competition, and the environment was very intensive. I learned a lot,” said Do Yeon Kim, a graduate student in computer science.

“It was amazing,” senior computer science major Kody Richardson said. “It was my first time traveling to a different country, and it was incredibly challenging as well.”

Kim also believes the experience gave his team a new perspective on time management and efficiency.

“After coming back from the WRS, I talked to students, and there was a big difference,” Kim said. “There is a mindset change. Everybody has 24 hours (a day), but how they use that time is different.”

Using the experience of the World Robot Summit, the team intends to improve and enter more competitions.

Paige Bennett is the science reporter. Contact her at [email protected]