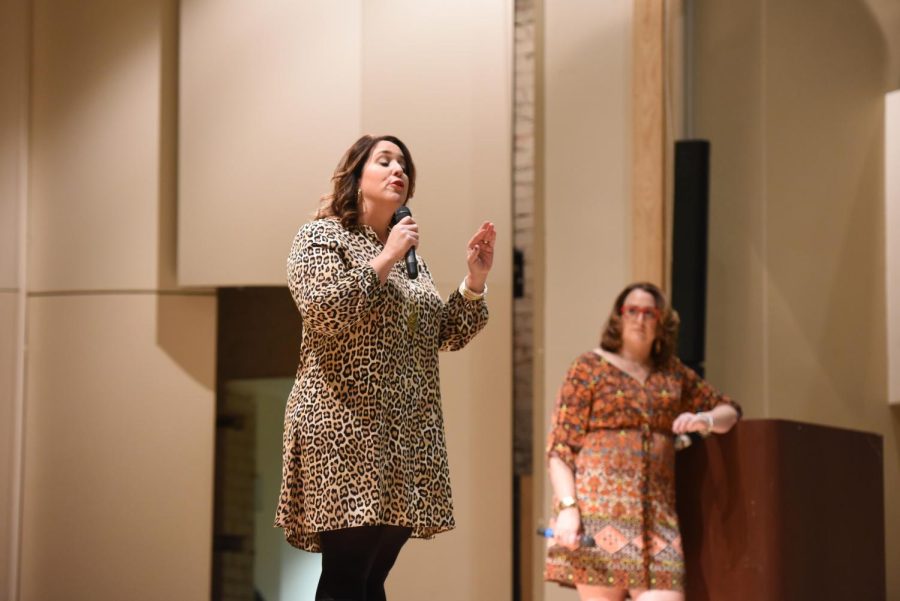 Kelly Addington talks Wendesday Nov. 14, 2018 about sexual assualt while Becca Tieder listens on. Kelly and Becca said it’s most important to remind victims it isn’t their fault or anything they did.

This was the opening statement given by speakers Kelly Addington and Becca Tieder in Cartwright Hall Wednesday night.

Tieder and Addington told a crowd of over 250 Kent State students about their experiences with sexual assault and how it can be prevented.

“We are dedicated to transforming the conversation one student at a time,” Tieder said. “Our goal is to leave any school better than we found it. We don’t care how you walked in here, but we care how you walk out.”

Addington and Tieder are best friends, educators and experts on sexual assault awareness and prevention.

“Our personal motto: Life is best lived not without fear, but with awareness,” Addington said. “Being a victim or being a survivor is something you get to choose.”

The community-wide event was hosted by Delta Gamma sorority. A member of the chapter thought the speakers would be important for students to hear after seeing the pair at a Delta Gamma’s national convention this past summer.

“The problem with sexual assault on campus I think is something no one wants to talk about,” said Michele Criss, the Delta Gamma’s vice president of social standards. “This starts the conversation and brings a whole different perspective.”

The speakers told the crowd they believe talking about sexual assault openly and without shame is “power.” They also aim to make audiences think twice before victim-blaming, to check on their friends and to understand that “consent is black and white.”

“We’re speaking for people who didn’t have the strength go do that,” Addington said. “Because we know there’s someone in this room who feels exactly how we felt. And we will not settle for anything less than consent culture. I will not stop trying to make the world a better place for my daughter.”

Over the last decade, Tieder and Addington have shared their message with over 500 college campuses, reaching more than half a million students and several branches of the U.S. Military. They have been featured on Dateline NBC, The Fox Morning Show, Cosmopolitan, ABC, CNN and NPR.

Hannah Kelley is the dean of students and greek life reporter. Contact her at [email protected]