Portage County Board of Elections: An inside look 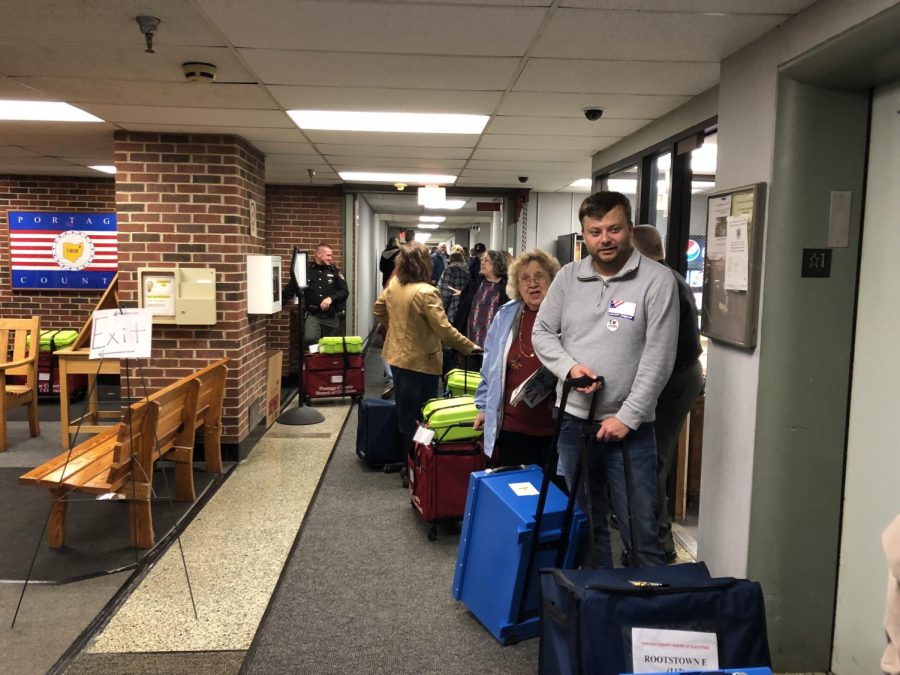 The atmosphere at Portage County Board of Elections on Tuesday evening was quiet while voters trickled in slowly, but steadily throughout the last hour of open polls.

People of all ages, most seeming to be over the age of 30, came in with smiles and looks of anticipation across their faces. Hayley Boulle, a freshman biology major, was one of many voters who came with an absentee ballot in-hand to place in the ballot return box centered in front of the entry way.

As a first time voter, Boulle said abortion laws were one of her top priorities in voting this year.

“I am super into politics and making changes for the better,” Boulle said. “I felt like it was my duty to vote. I feel like voting would give me some sort of say in the world.”

The Board of Elections have seen a growth in absentee ballots this year with over 15,000 absentee and early voters in the first results of the election.

“I can say that there have been about 3,000 more absentee ballots this year than previous years,” Deputy Director Theresa Nielsen said.

By 8:20 p.m., poll workers from 129 precincts poured into the Portage County Board of Elections building carrying cases filled with ballots and voter information. The process allowed the workers to get in and out, and back home to their families after a long day of working the polls.

Nick Calabro worked the polls on Tuesday in Mantua. He said that voters seemed determined to vote and select the best candidates this year.

“By 10:30 a.m., we were backed up,” Calabro said. “People were lined up at the doors waiting for the polls to open. It was incredible.”

Savannah Heiney, who worked the polls in Ravenna on Tuesday, has been working the polls since 2015. According to Heiney, Issue 1 seemed to be the most important issue this year based on conversations throughout the day.

“Well over 1,000 people came out to our voting location today,” Heiney said. “It was really nice to see people come out and perform their civic duty. For a midterm, this was a very good turn-out.”

As for the general turnout of voters, it was clear that voter turnout this year showed prominence over previous midterm elections.

“It’s too early to tell, but it seems there’s been a higher turnout this year for sure,” said Denise Smith, chairperson of the Board of Elections. “I think there’s a renewed interest on what’s going on on the local, state and federal level. Healthcare is definitely a reason in why people are coming out and voting today. It’s an important issue.”

Final: unofficial results for Portage County concluded with DeWine with 49.03 percent over Cordray with 46.94 percent, and Brown at 53.02 percent over Renacci at 46.88 percent.