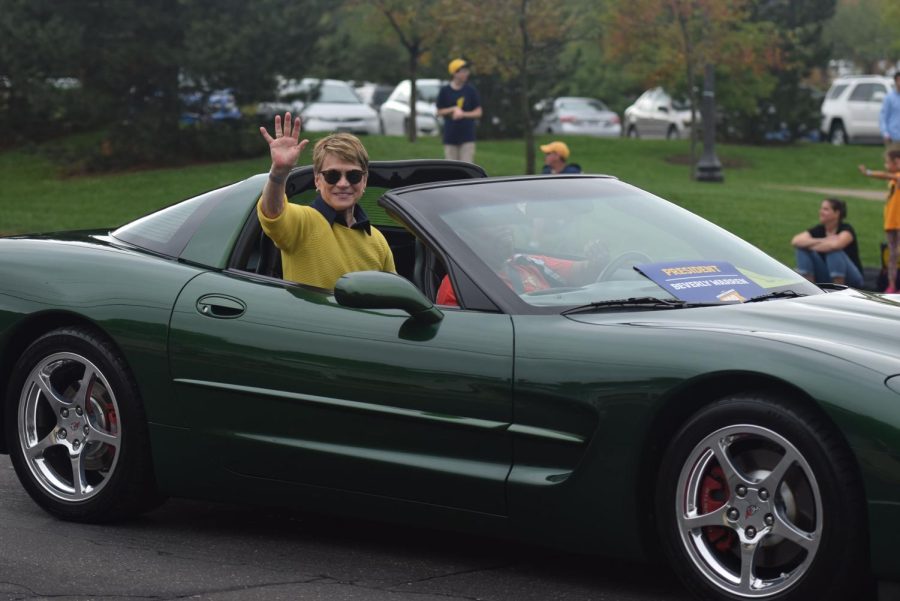 The curbs were packed with lawn chairs, bleachers and crowds of people dressed in blue and gold. One student showed his spirit with blue and gold pinstripe overalls.

Some residents couldn’t find a place to sit and parked their cars in the parking lots of local businesses to watch from afar. Even the medians splitting the two sides of Main Street had parade-goers set up to watch from up close.

The Kent State Marching Golden Flashes kicked off the parade with a brief performance in front of the alumni tent set up on front campus.

“I thought it was cool seeing all of the students and alumni singing the fight song together,” said Inola Howe, a senior psychology major. “It really showed the Kent State spirit I love seeing at this university.”

“It was cool to see everyone out to support Kent State,” Mead said. “My favorite part was seeing my family in attendance. As an out-of-state student, I was so grateful that my family could make it today.”

Rain clouds started rolling in as the parade made its way past South Lincoln Street, but participants and attendees didn’t let that stop them, especially those watching from the row of fraternity houses on Main Street. Cheers and chants were started by current and alumni fraternity members as their brothers participating in the parade walked by getting soaked.

These cheers continued even after the Greek life portion of the parade had passed. Members outside of the Alpha Tau Omega house started chants for TV2, the Fork in the Road food truck and even for a Dodge Dart that drove by.

Shortly after, the rain clouds started passing and the sun came back out for the end of the parade. Finishing off the parade were a few local businesses,including Davey Tree Lawn Care.

“Davey threw little black footballs this year, and everyone loved them,” said Jeff Ball, who walked with the Davey parade float.

Other participants were passing out candies and beads, which were a hit among the kids in attendance.

“It’s fun seeing all the kids going for the candy,” said LuAnn Coldwell, a Kent resident. “

I was surprised by the number of groups in the parade this year,” said Michael Coldwell, LuAnn’s husband.

Even the furry friends of Kent State were feeling the spirit as participants dressed their dogs in blue and gold.

The parade came to a close as the last float reached Franklin Avenue, but the exciting atmosphere never left. Kent State’s 100th annual Homecoming Parade had established the energy for the activities to come throughout the day.

Bryan Vohsing is the Business and Downtown/Trumbull reporter. Contact him at [email protected]