Extra Points: On an actual extra point, a Wagon Wheel and Theodore Roosevelt 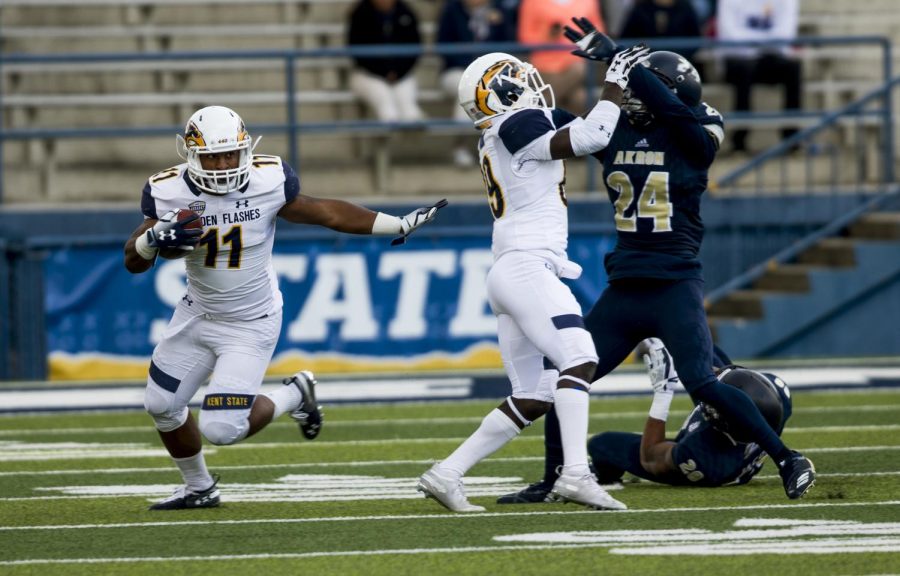 Kent runing back Justin Rankin rushes during first half of the Flashes matchup against Akron on Oct. 20, 2018. The Flashes lost in overtime, 24-23.

2.     Woody Barrett found Justin Rankin over the middle, who, after a broken tackle, found the end zone. Rankin pointed to a camera in celebration, before being joined in the corner of the end zone by receivers Antwan Dixon The Flashes had done what they needed to — respond to Akron’s overtime-opening score, an eight-yard touchdown catch by Andre Williams.

3.     But that euphoria quickly turned to misery.

4.     Kent State backup quarterback Dustin Crum fumbled the snap on the ensuing extra point. Crum stood up and tried to freelance a play, but Akron’s Jordan George threw him to the ground, ripping the heart out of the Kent State faithful who braved the weather at Dix Stadium. For the fourth straight year, Akron took home the Wagon Wheel, beating Kent State, 24-23.

5.     As the Zips ran towards their student section with the Wagon Wheel, Flashes spread out across the field tried to process what had just happened. Players formed a line to their locker room. Freshman receiver Isaiah McKoy crouched behind the Flashes bench. Rankin shared a kiss with his daughter before entering the locker room. And last was coach Sean Lewis, who took his hat off and wiped his head before heading in to address his players.

6.     “It was a low snap,” Lewis said of the final play. “Crum got his hands on it and bobbled it but did a good job of executing our fire call and we just didn’t make the play.”

7.     Lewis called time moments before in an attempt to, as he said, have his team “collect our thoughts and make sure we had our protection set and were all on the same page.”

8.     Lewis said he “thought about” going for two instead of kicking an extra point, but instead elected to put the game on the foot of freshman kicker Matthew Trickett’s foot.

10.  “The kids fought like crazy and it was a tough, emotional rivalry game,” Lewis said. “I felt like they played tough and competed, but I wish the result was different especially for the seniors that were on the field before the game. They are a great group of kids.”

12.  Controversy swung the other way in overtime, as Kent State linebacker Cepeda Phillips was called for a questionable roughing the passer penalty after the Flashes defense stopped Akron quarterback Kato Nelson on second down. Instead of a long third down, the Zips had first and ten. Williams’ touchdown catch came on the next play.

14.  At best, the Flashes can finish 5-7, meaning their bowl eligibility is all but gone. While this season might not have gone the way that Lewis and the Flashes would have liked to have gone, one of the silver linings of the season thus far has been Woody Barrett.

16.  Barrett struggled early but made some pivotal in-game adjustments to Akron’s defense, which was a big part of the Flashes being an extra point away from forcing a second overtime.

17.  “A tip of the cap to coach Bowden and his staff, they did some things they hadn’t shown all year,” Lewis said of the Zips defense. “We had to settle in and see what the flavor of the week was and how they would defend us. Once we got those adjustments to him, he started to operate the way we knew he was capable of.”

18.  Barrett pulled off another stunning play at the end of the first half, as the Flashes offense found itself on the Zips 22-yard line with seven seconds left. Lewis elected to run one play — a play that had Barrett rush for a touchdown as the clock struck zero.

20.  Outside of his late error, Cepeda Phillips was a terror on the defensive side of the ball. He finished with a team-high 12 tackles and brought a sense of urgency and hype to the Flashes defense. Darryl Marshall continued his impressive campaign with an interception, while Khalil Morris recorded his second sack of the season.

22.  Towards the end of his press conference, Lewis referenced Theodore Roosevelt’s “Man in the Arena” speech to describe the feeling in the Flashes locker room after the game.

23.  “Even though those kids are hurting, they jumped in the arena and gave everything they had,” Lewis said. “They’ll never stand with the cold and tin souls that don’t know victory or defeat.”

24.  The Flashes are back in action October 30 when they travel to Bowling Green to take on the Falcons. Kickoff is set for 8 p.m. Talk to you then.