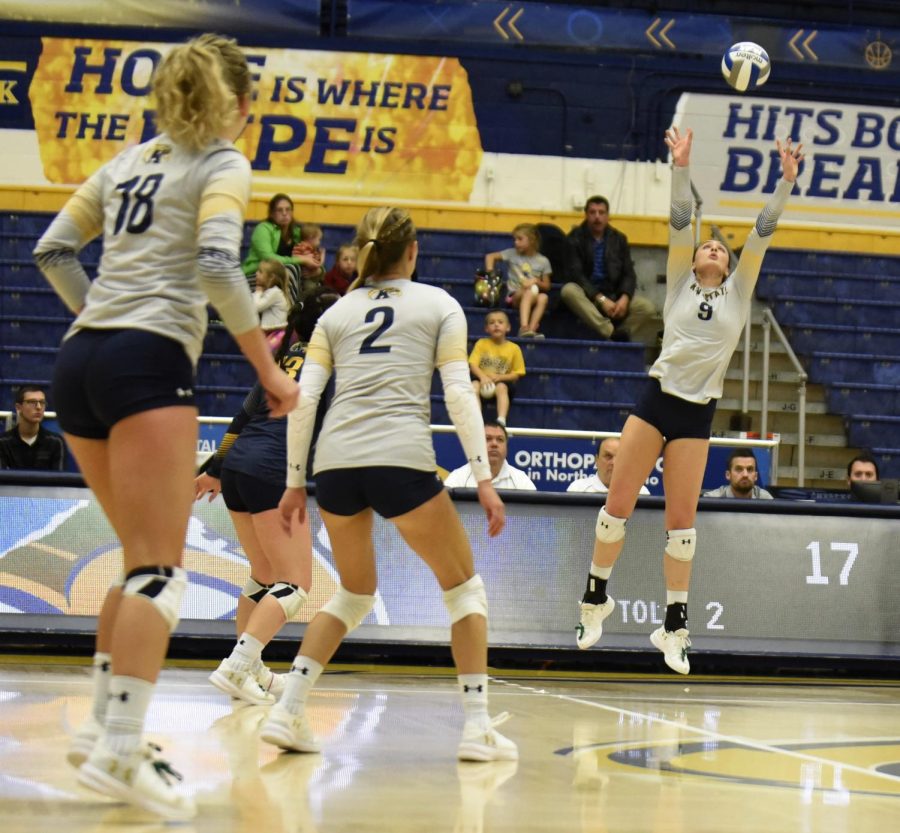 The Kent State volleyball team (9-13, 2-6 Mid-American Conference) had a strong start to their weekend defensively as they finished their weekend-opening game against Toledo with 87 digs.

Kent State also had an impressive offensive attack as they finished with 64 kills on 59 assists. Freshman setter Alex Haffner was key as she finished with 51 assists.

Each set was decided by six points or less. The Flashes had an improved their serve-receive in order to take the final two sets, 25-19, 26-24.

“Their serving also changed,” coach Don Gramola said. “As we put pressure on them, they got a little more tentative because they didn’t want to give us points since we were in the lead. I also believe our passers stepped up.”

Consistency on the front line was also key in the win. Senior opposite Amy Kober, senior outside hitter Lexi Mantas and freshman opposite Melissa Kolurbasi finished with 14, 14 and 13 kills respectively. The Flashes dominated offensively up front, finishing with a 64-47 kill advantage.

“It’s exciting to breakthrough and get our first road win of the year” Gramola said. “More importantly, we played some of the best volleyball that we have all season with how we were making smart decisions and working together as a unit. We had a good balance offensively with four people with double-digit kills.”

The Flashes were dominated in every facet of the game. They were beaten in every category.

It was a game of catch-up from the first serve. The Flashes lost each set by an average of seven points.

Kent State did not have a single player in double-digit kills, and they finished the game with one ace.

The Flashes have now lost four of their last five games.

They will take the court next on Friday at 6 p.m. as they take on Northern Illinois (7-16, 5-3 MAC) inside the Memorial Convocation Center.