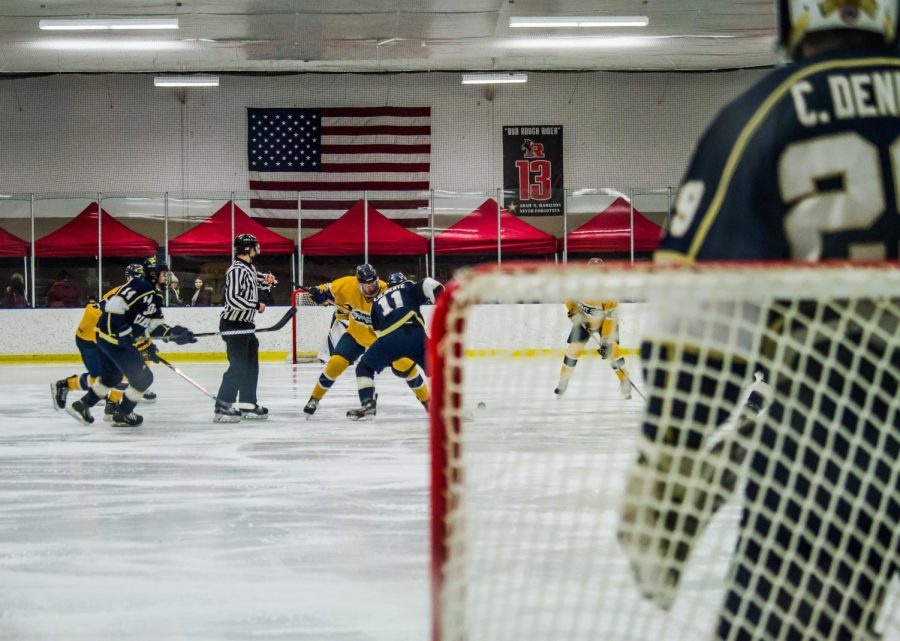 Kent State and John Carroll battle for a faceoff as Lobos goaltender Charlie Denner looks on. The Flashes won the game, 9-2.

Underwood found out his team is everything he hoped they would be as the season progresses.

Friday and Saturday night the Flashes’ traveled to Grand Rapids, Michigan to battle Calvin College. The Flashes won both games on the way to a weekend sweep.

“Having a 7-1 start is great,” Underwood said. “You tip your cap to the leaders of the team. It gets guys in a good mood and makes them feel good about themselves. We do have some bumps and bruises so we are a little worn out on the back end, but we will have a good week of practice.”

The games last weekend were the Flashes first two league games of the year winning Friday 3-1 and Saturday in overtime 3-2 with a game winner by Chance Taylor, putting the team on a five-game winning streak.

“It feels great to be able to put together a winning streak early in the season,” Taylor said. “We still have a lot to improve on, but we are finding ways to win each game and that is what matters. We are still learning game by game but our team chemistry is improving and I think playing away these past couple weekends has really brought our team together.”

Forward John Buttitta scored his 100th career goal for the Flashes this weekend, scoring on both Friday and Saturday night.

“It feels good to have a few wins under our belt, but we got to stay focused on what is ahead,” Buttitta said. “It gives us a lot of momentum and if we keep playing like we have been, I think we should be fine.”

The timing of the Buttitta’s goal was fundamental to the teams’ early success in the game on Saturday according to Underwood.

“It was the first goal of the game,” Underwood said. “What that goal did was set the mood for the game. I got our guys going. It was exciting and a great start to the game and helped us carry it out through the first.”

Sean Moore had one goal and two assists this weekend to help keep his teams’ on the winning streak.

“It feels great to get our first league wins of the year,” Moore said. “Every game in the league is very important and with two less games than last year, they are crucial.”

The sweep this weekend moves the Flashes to 2-0 in league play.

The Flashes are back in action Friday Oct. 26 at 7:30 p.m. against West Virginia at the Kent State Ice Arena.

Morgan Dunlop is a sports reporter. Contact him at [email protected]