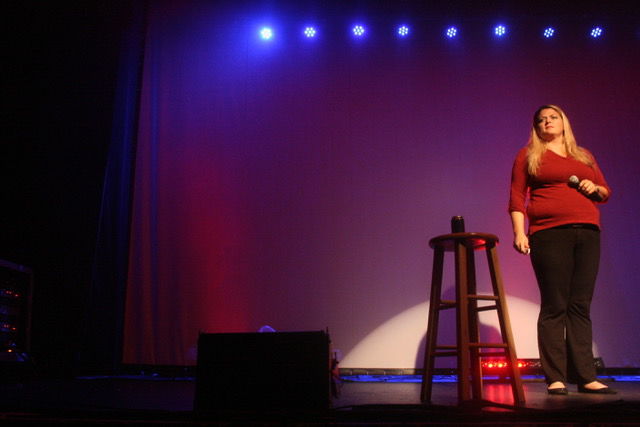 Downtown Kent’s 11th annual Ghost Walk drew in an eager crowd of participants Saturday night. The walk is Kent’s warm welcome to the October month leading up to Halloween.

The Ghost Walk starts with a brief tour inside the allegedly haunted Kent Stage, which often draws in the attention of ghost hunters and stories of ghostly sightings from staff and customers. According to the Kent Stage’s official website, the building was “constructed in 1927 as a silent movie and vaudevillian theater and is the sole surviving downtown theater in the county.”

Her senses heightened as she entered the haunted stage. “It was very dark. I felt more like a chill,” she continued.

Participants were ushered into the dark and smoky theater inside the building where another tour guide met the crowd to tell them about an unsolved mystery that still haunts Kent.

“My favorite part was the second half when we went to the Kent Stage to listen to the lady talk about the missing person,” Harper said. “I remember the lady telling us how the girl was leaving Prentice trying to go to Dunbar, and she left with somebody named Bill and she went missing.”

That unsolved mystery was about Kent State student Judy Martins who went missing 40 years ago. Organizers of the Ghost Walk made sure to keep the search alive by reminding participants this case is still open.

The walk continued down East Main Street where participants were introduced to the hidden historical haunted houses of Kent. One of the tour guides told a story of a time when she was driving in the neighborhood and saw an older woman sweeping her front porch at 11:00 p.m., only to find her slowly fade away from her gaze.

When touring the haunted houses of Kent, Harper felt like there was another presence on the tour.

“I felt like someone was watching us as we went through the houses,” Harper said.

Patricia Battle is the military and veterans, adult services reporter. Contact her at [email protected]