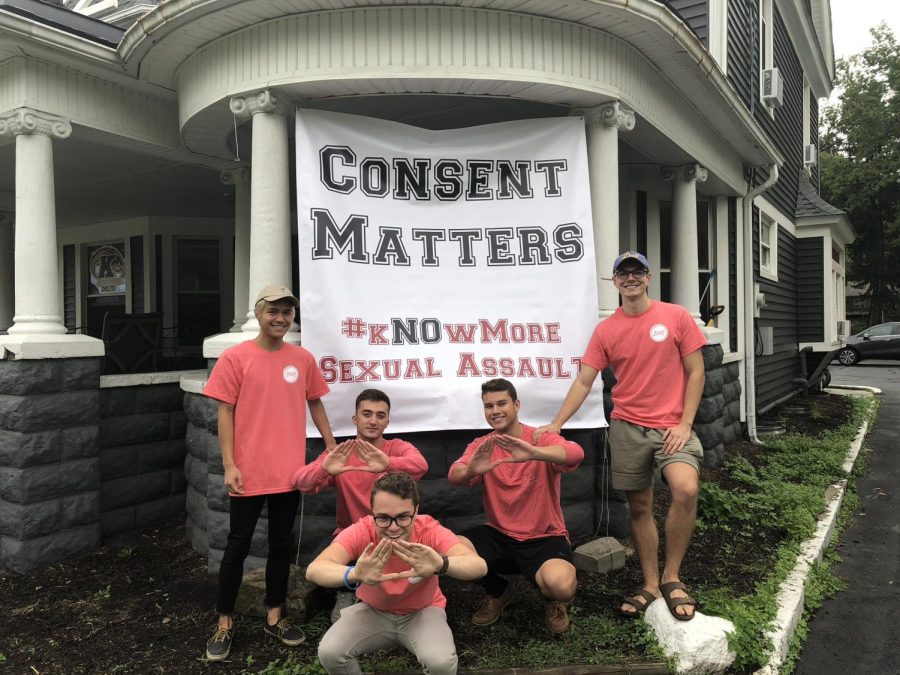 The Delta Tau Delta fraternity house on Main Street put up a new banner that is 39 square feet.

UPDATED AS OF 10/5/18: Delta Tau Delta put up a replacement sign Thursday. The new sign has the same message in printed block letters. Delta Tau Delta said the new sign is 39 square feet, less than the city limit requiring a permit.

The city of Kent issued a verbal warning to the Main Street Delta Tau Delta fraternity house for posting a bedsheet sign in front of the house that violates Kent city zoning code on Sept. 27.

Kent zoning code prohibits the posting of signs larger than 40 square feet and taller than six feet without a permit, said Bridget Susel, the community development director for Kent.

“The content of the sign was not a factor in the issuance of the warning,” Susel said. “Bed sheets exceed that limit.”

The fraternity made the banner as part of a banner-making contest for anti-hazing and sexual assault awareness week, said Delta Tau Delta President Kyle Austin.

“We felt that sexual assault is a big issue on all college campuses and greek life is typically the focal point of these allegations,” Austin said.

Austin believes it is their responsibility as a fraternity “to take a stand for this issue and make our voices heard.”

“There’s a huge stigma with fraternities and a history of sexual assault that that is the public perception,” junior Delta Tau Delta Brother Michael Trauman said. “And I think that sends a more powerful message.”

Trauman hopes the banner will raise awareness for sexual assault.

“We try to make the world a better place and I just think this is one little added step,” Trauman said.

Delta Tau Delta has had large signs before, receiving a similar warning in 2008; in that case, the sign was removed. The city does make exceptions to the permit requirement, but only during rush week.

“The city is aware these signs have been used for decades and are posted for only one week,” Susel said.

Austin confirmed the sign would remain posted until a replacement is made.

“We are currently working on a getting a banner that is 39 square feet that is indeed in city code and looks very professional.”

Delta Tau Delta Association could face a citation if the sign is not removed by Friday.

David Williams is a general assignment reporter. Contact him at [email protected]