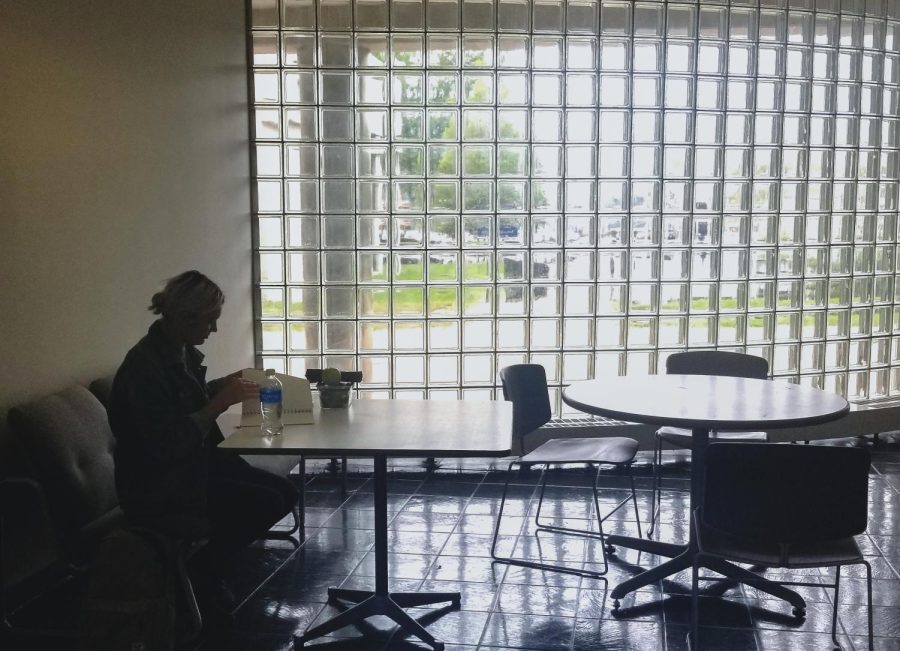 A student works in the first floor lobby of Rockwell Hall on Tuesday, Oct. 2, 2018

Senior fashion design major Casey Hoelle said her college experience has been challenging and stressful. Hoelle is currently taking 19 credit hours and is busy nonstop. The workload from her design classes takes up most of her time.

“I literally just turned in a project for portfolio, which is a fourth-year class,” Hoelle said. “We’ve been working on the same project since the beginning of the semester, and we just turned it in and I haven’t slept, showered or ate in two days. … That’s probably a little dramatic, but that’s what it feels like.”

Like Hoelle, some Kent State fashion design students are not happy about their access to Rockwell Hall, which is home to most fashion classes on campus. The building is open from 7 a.m. until midnight, and some students feel that doesn’t leave them enough time to work on projects.

“As a design major, it’s very inconvenient at times,” Hoelle said. “Having projects due, you’re not able to always work around the clock. I know a lot of girls with sewing machines at home, but if you don’t have that, it makes it difficult to get projects done on time.”

While in studio spaces, students are supervised by faculty of the Fashion School until 5 p.m. But from 6 p.m. to midnight, faculty does not oversee the area.

Former director of the Fashion School J.R. Campbell is no stranger to the issue of 24-hour access. He encountered displeased students throughout his time in the building, and he said he believes there are too many hazardous liabilities for Kent State.

“From an insurance point of view and a concern for safety, more injuries were happening, with more people sewing through their fingers in the nighttime hours than any other time when there was nobody there to assist and help,” Campbell said.

Campbell, along with Kim Hahn, the interim director of the Fashion School, have experienced fashion students leaving doors open for their friends to enter the building past closing time, inebriated college students using

the building’s restrooms and a homeless man living there. These events all led to the reinforcement of the midnight closing time.

“We don’t want students to be alone, and we have a great number of female students,” Hahn said. “We had some incidents on Lincoln Street where strangers attacked students, and we don’t want anyone coming in after hours.”

While safety concerns are certainly part of the reasoning behind Rockwell Hall’s hours, preparing fashion students for the real world is another.

Campbell said students working on projects at strange hours of the night won’t help them work on a more consistent time frame in the industry.

One student said she feels leaving the building when it closes and having to continue her projects at a later time affects her creativity.

“I have to call off of work or skip class just so I can have enough time to put into my design work,” said Autumn Stackhouse, a senior fashion design major. “I understand why they would want to close it at a reasonable time, but I’m sure a lot of students feel more stressed when they have to leave.”

The Fashion School was established in 1983 as the Shannon Rodgers and Jerry Silverman School of Fashion Design and Merchandising. According to Fashion-Schools.org’s 2018 rankings of the top 50 fashion design schools and colleges in the U.S., Kent State’s Fashion School ranked fourth.

The College of Architecture and Environmental Design, located near Rockwell Hall on campus, has a card-swiping system that allows architecture students to enter whenever they need to. Campbell and Hahn are both aware of this system, but they said they fear the cost of the development for Rockwell Hall.

With the cost of hiring late-night security and professors to supervise students in the studios, the university could end up spending thousands of dollars for this card-swiping system. For now, researching a way to budget this plan or building a space that will be open 24 hours elsewhere are ideas Campbell and Hahn have in mind.

“We’re certainly looking into the possibility of having limited card access for design students in the future,” Hahn said.

Ashley Johnson is the fashion reporter. Contact her at [email protected]