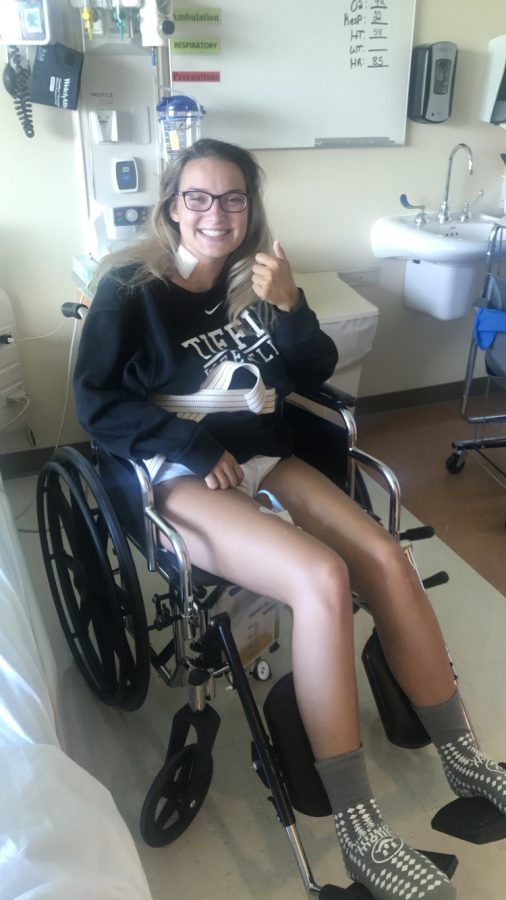 Lauren Raifsnider poses for a photo.

It was a normal July day for junior accounting major Lauren Raifsnider when her body went numb and began to shut down.

After Raifsnider’s long day of work, she headed to Akron, Ohio, to visit some friends. Raifsnider planned on going out and having a fun Friday night, but those plans quickly changed.

“I went to work that day, and everything was fine,” Raifsnider said.  “And then that night, around 5 p.m., my right arm started going numb and I thought, ‘Oh, maybe it’s just falling asleep or something,’ but it was more dramatic than just falling asleep.”

Raifsnider began to lose feeling in her right arm. Soon after, her hand balled into a fist and she was unable to open it. She decided to not think much of the sensation and focused on having a good time with her friends.

University of Akron students Brianna Kouzoujian and Mackenzie Vogt were both there the night Raifsnider began to feel ill.

“We were on our way home from the store and Lauren was complaining that her hand was numb. I honestly didn’t think anything of it. She sat at a desk all day so I thought that it was probably just a pinched nerve or something,” Vogt said.

Despite her friends’ dismay, Raifsnider realized the numbness was escalating and decided to stay in while her friends went out.

“When I got out of the shower, Kenzie came downstairs and told me Lauren wasn’t going out with us because now both of her arms were numb,” Kouzoujian said. “Kenzie and I kind of looked at each other like ‘Yeah, right.’ I went up stairs and got Lauren some ice and tried telling her some exercises to do to stretch out her back and arms.”

Little did they know, Raifsnider condition was much worse than a pinched nerve.

Once her friends left, Raifsnider began to feel the numbness spread to her stomach. She realized things weren’t right and began to walk to the door. It was then that Lauren collapsed.

“I knew I had to get up and go unlock the door so someone could come help me,” Raifsnider said. “But when I got up, I fell. I realized the numbness began affecting my legs and I was on the ground for a half hour trying to get up.”

Finally, Raifsnider was able to swing herself around and use the “Hey, Siri” feature on her phone to call Vogt. Raifsnider friends rushed home and brought her to Akron Children’s Hospital where she was later sent home with a “pinched nerve.”

After Raifsnider was released, a friend drove her home to Bellevue, Ohio, to be with her family. She woke up the next day feeling slightly better, and she told her mom about the previous night.

“I was talking to my mom and I was telling her how I thought I had an appendicitis because my right side was really hurting,” Raifsnider said. “But as the day went on, I got worse and eventually lost control of my bladder, and that was when I knew I had to go to the hospital.”

Medical professionals at The Bellevue Hospital began to run many tests on Raifsnider, ruling out the possibility of a stroke through a CT scan. However, doctors and nurses knew there was more to the story and scheduled a virtual call with a doctor at ProMedica Toledo Hospital. The neurologist on the call urged Raifsnider and her family to make the trip to Toledo to do further testing.

Once she was admitted at ProMedica, Raifsnider underwent another series of testing, a spinal tap and five treatments of Plasma Exchange Therapy which occured every other day for ten days. Medical professionals concluded that Raifsnider had a spinal condition called Transverse Myelitis.

According to the National Institute of Neurological Disorders and Stroke, Transverse Myelitis is an inflammation of the spinal cord that can affect anyone at any age, gender or race. Symptoms of Transverse Myelitis include pain, sensory alterations, weakness in the legs and arms and bladder dysfunction, all of which Raifsnider experienced.

“The doctors don’t know if it will come back again,” Raifsnider said. “They said there is no solid answer in whether or not I’ll have flare ups of the condition again, but they told me to notify a doctor immediately if I start to feel the numbness again.”

Raifsnider was released from ProMedica on July 18, ten days after she was admitted. She was then taken to the Rehabilitation Hospital of Northwest Ohio where she received almost a month of physical therapy.

“I had to learn how to walk and feed myself again,” Raifsnider said. “I’m lucky because doctors were surprised that I never lost my speech or had any breathing problems.”

As of now, Raifsnider can walk on her own and has gained control of her left arm and hand.

“In therapy, I have to take so many breaks because if I push myself too hard, it could make my body worse and slow down the healing process,” Raifsnider said. “If I overwork myself, it takes a couple of days to get back in good shape.”

Throughout her journey, Raifsnider has managed to stay positive and comical, even comparing the dysfunction of her body to an episode of Spongebob.

“Do you know that episode of Spongebob where Squidward turns to cement?” Raifsnider asked. “That’s how my body felt.”

Raifsnider’s sorority, Delta Zeta, stuck by her side this summer while her “big” Dalyn Wagner, a senior finance major, started a GoFundMe page for her struggling friend.

“It was amazing to watch so many people come together from our sorority and the community,” Wagner said. “Even people who didn’t know her. We came together to raise money for her cause and hospital bills.”

Raifsnider had a constant support system in her friends and family. Her mom and dad took turns spending nights by her bedside while her stepmom, grandparents and friends visited whenever they could.

“I have a great support system,” Raifsnider said. “My family definitely handled it a lot better than I thought they would. I was a wreck during the whole thing, and they tried keeping my spirits up.”

However, Raifsnider’s friends have different opinions on how she handled her situation.

“Lauren is one of the strongest people I have ever met and this proves that,” Kouzoujian said. “While we were sitting in the hospital, I don’t think she stopped smiling or laughing once. She has such a positive, contagious personality that lights up any room she walks in.”

Raifsnider remains positive as she continues to recover at home.

“Everyone tells me how strong I’ve been through all of this,” Raifsnider said. “But I believed I had to keep my spirits up. I realized that early on. I couldn’t get down about it, and I knew I had to keep pushing myself.”