Sights and scenes from Kent Halloween 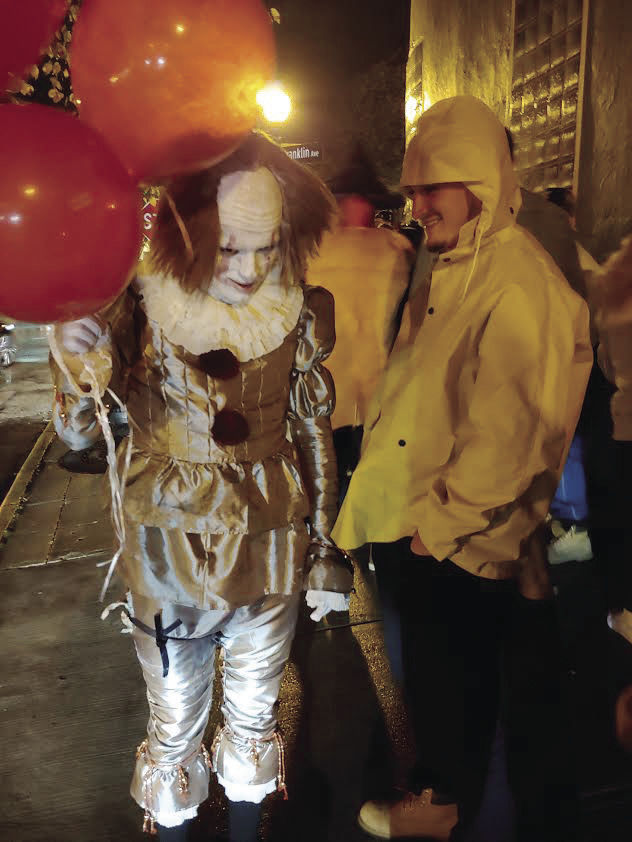 As dusk turned to darkness in the city of Kent on Saturday, the Halloween atmosphere came alive. Downtown Kent quickly filled up with people of all ages and backgrounds, with costumes ranging from cartoon characters to icons of modern horror.

Lines jutted out of the bars, snaking haphazardly up and down Water Street as patrons milled about, their breath floating into the cold October air, forming a smog like cloud above the lines. Outside EuroGyro, a woman dressed like Freddy Krueger chatted with a cowboy, the line barely moving.

Police officers walked downtown in groups of four, chatting amongst each other while also monitoring partygoers. A large group of SWAT officers converged outside Troy Grille, quietly observing the lines across the street. A tractor drove through downtown with a hayride, with the families on the back offering high fives to patrons waiting in the line for Water Street Tavern. Outside Zephyr, “Baker Mayfield” shared a cigarette with “Gene Simmons” from KISS.

There were just as many tricks as treats. A man in a pumpkin mask stood at the corner of West Main Street. and Franklin Avenue, staring at oncoming traffic. A Jeep Patriot drove by as four men in clown costumes hung out the windows, screaming at no one in particular.

Inside Zephyr, “Pennywise” from “It” was perched at the bar, sharing a pitcher with a “hot dog” and “hamburger.”

Downstairs in the basement, “Deadpool” and “Mario” danced together as “YMCA” by the Village People played in the background, two characters in a melting pot of costumes.

The festivities weren’t limited to downtown. At off-campus housing complex East Townhomes, partiers congregated in the lawns of several of the houses, while muffled music sounded from the crowded interiors. A man dressed as a construction worker walked down the sidewalk, and it was unclear whether he was going to a party or getting some overtime. Smashed pumpkin fragments sat in the parking lot, gradually being beaten down by the steady drizzle and procession of cars coming in and out of the lot.

At the Domino’s on South Water Street, a sign taped to the door asked customers to, “Please remove your mask before entering the store” for security reasons. The store seemed busy, but the employees were in good spirits, laughing and joking with customers.

Dylan Reynolds is an assigning editor. Contact him at [email protected]