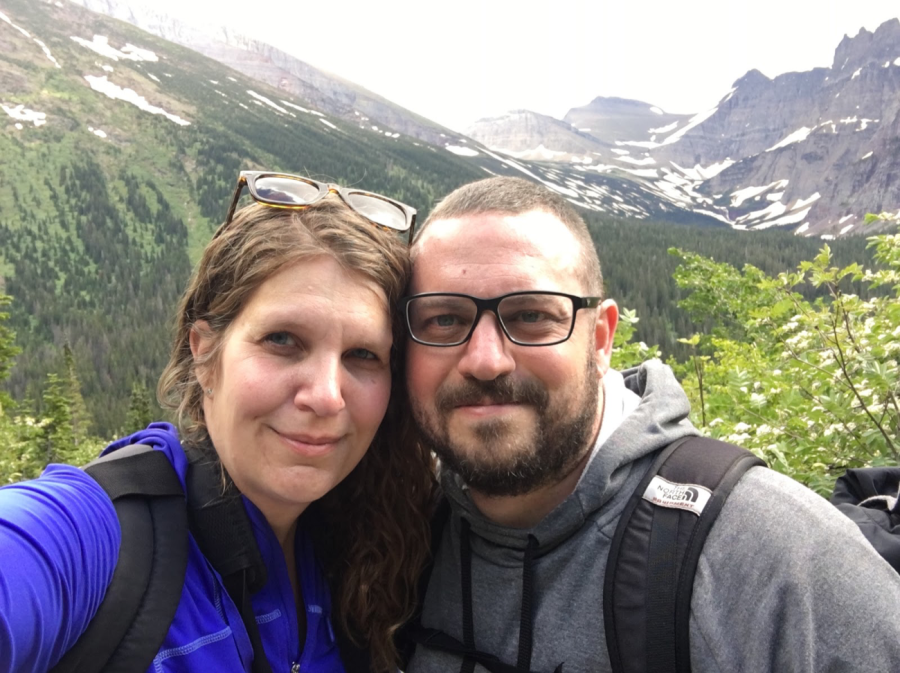 Brandy and Dan Marks on a recent trip to the mountains.

“Kiss on the K” was introduced to Kent State’s Homecoming festivities in 2011. Alumni, students and faculty alike gather on Risman Plaza and share a kiss on the “K.” Every year, couples submit nominations to be an “honorary couple,” and a few are selected. Dan and Brandy Marks, along with Pete and Nancy Welch, are two couples who were selected as “honorary couples.” Here are their Kent State love stories.

Two alumni took a chance on coming to Kent State and, against all odds, ended up falling in love.

But Dan and Brandy Marks owe their relationship to more than Kent State.

“We are big believers of fate in our family, and there are so many things that should have kept us from being there in that moment,” Dan said.

Originally from North Carolina, Brandy took a year off  from school to figure out what she wanted to do, but eventually followed her older cousin to Kent State.

Her husband, Dan, on the other hand, went against his parents’ wishes to stay home in Pittsburgh in order to attend Kent State for graphic design.

Brandy and Dan met in the fall of 1994 in their residence hall, the same hall that Dan specifically requested not to be put in but was put in anyway.

Because they lived farther away, they were often stuck in the dorms and ended up spending many weekends together while their friends went home.

“There was a much smaller group of people that were in the dorms on the weekend,” Dan said. “That’s when we really started to hang out more one-on-one.” Weekends in the dorm led to dates at Eastway and the Schwartz Center for dinner and movies, and they have been together ever since.

Their sophomore year, they moved into different dorms: Dan moved to Verder and Brandy moved to Tri-Towers. Dan’s graphic design major became very difficult as he progressed and spent many hours staying in rather than going out, and Brandy stayed by his side. Dan also did not get along with his roommate and ended up staying in Brandy’s dorm most days.

“I always say I got two things out of college: my degree and my wife,” he said.

The week after they graduated in May 1999, Dan and Brandy got married in St. Thomas. They have been together for 24 years and have two children together.

“If one tiny thing had been different, we would have never met,” Brandy said. “If he had gotten Verder or if he had stayed home or I didn’t take that year off.”

Falling in love is as easy as going to class.

In 1967, Nancy Welch was a lab instructor working as a graduate assistant for Kent State, and Pete Welch was a college senior who needed one more biology lab to graduate.

“So I went in and sat down and the instructor got up to instruct the class, and that was eventually to be my wife,” Pete said.

One summer, after the lab had finished, Nancy and Pete both decided to go to the Draft House − a very popular bar off campus at the time − with a group of friends. As it turns out, they both were from Massillon, Ohio, which Nancy said, “made dating a lot easier.” They both remembered one another from the lab they were in and hit it off.

Nancy finished her degree from Kent State in 1967 and officially graduated in 1968. Pete claims himself as a “professional student” and finished school a little later than planned in 1971, and “one thing led to another, and we decided to get married in 1968,” Pete said.

Pete and Nancy planned to spend their 50th anniversary in Alaska, but those plans derailed because their daughter is getting married this year. Nancy and Pete have rescheduled their trip for next year, but will celebrate their anniversary in Hilton Head instead.

Krista Renaldo is the homecoming, alumni affairs, and fundraising reporter. Contact her at [email protected]