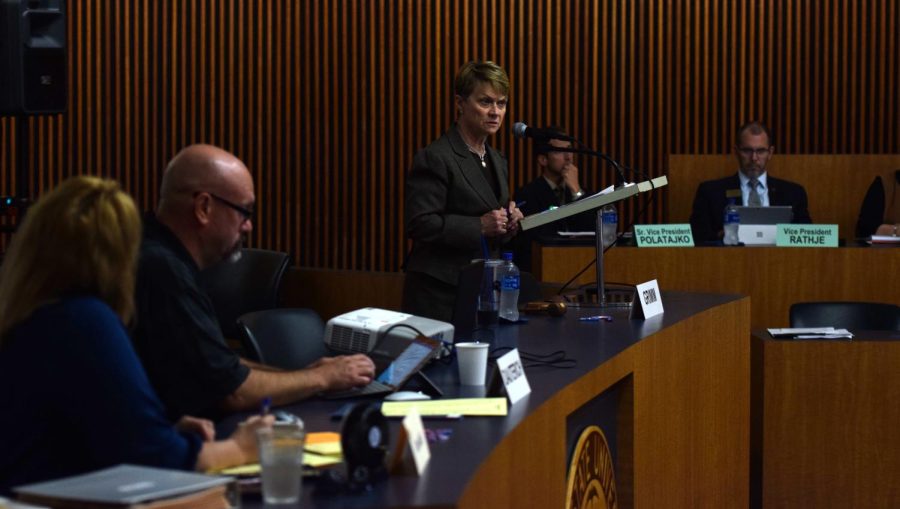 Shay Little, the vice president of student affairs, acknowledged to Faculty Senate Monday that Aramark had a rocky start to the semester but has improved its services as a response to student complaints.

Little said the dining services team was not ready for the beginning of the semester. Students have been vocal in their dissatisfaction with dining services, and she said they have been listening to those concerns.

“The dining team was unprepared for the new opening schedule,” Little said. “More than one-half of our meal plan holders are first-year students on the same schedule through KSU Kickoff. The meal plan structure did not support enough late night options that student’s desired and expected.”

The implementation of the new dining plans led to more confusion and complaints than successes, Little said.

She said students are finding the application and hiring process for dining services through Aramark to be difficult, which is resulting in low hiring rates.

She said more than 2,000 students are utilizing the reusable container program. They see about 1,500 containers used each week. Students are only able to check out one container at a time.

Molly Wang, a senator from the Twinsburg Regional Academic Center, told Little students and faculty have complained about food being expired for two days on its grand opening.

The hours in some dining halls have changed as well in an attempt to better fit the needs of students, as Munchies Market, Eastway Deli and Rosie’s are now all open after 8 p.m.

The university also has started offering more food options, as well as more meal exchange options, particularly at the Eastway Deli. This, along with other factors, has resulted in a reduction in product outages and shorter lines.

Richard Mangrum, a senator and professor in Kent State’s aeronautics program, expressed concern that quality, quantity and the price of food have not improved.

Another senator told Little she was concerned about the price of food.

“The food quality was good,” she said. “I’m just concerned about the cost to the students.”

Linda Piccirillo-Smith, a senator and English professor, brought up a student from last year who reported an assault by a non-student Eastway employee to Piccirillo-Smith.

The employee was suspended, but the student almost dropped out of school due to the assault, Piccirillo-Smith said. The Eastway employee, to the senator’s knowledge, was reinstated.

Little said she will look into the incident and follow up with Piccirillo-Smith.

Rachel Hale is the administration reporter. Contact her at [email protected]