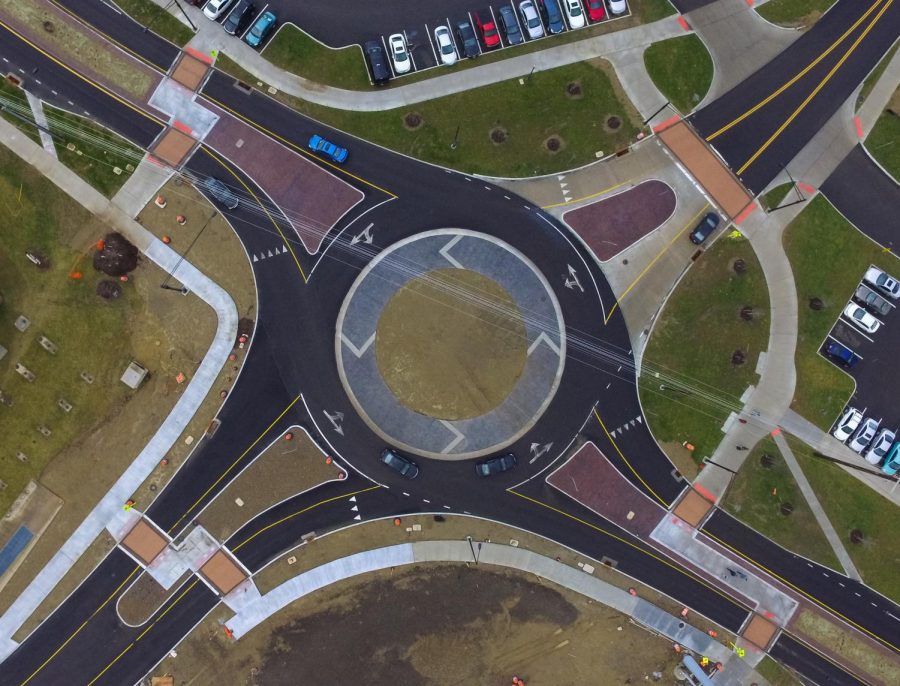 Aerial drone photo of the new roundabout on Summit Street.

So what led to this trend? Kent City Engineer Jim Bowling said the most important factor is safety.

From a design perspective, Bowling said the concept of a roundabout makes sense.

Roundabouts are also safer because cars slow down while going through them, unlike a regular intersection.

“At a signal intersection, the roads are designed for cars to go the speed limit,” he said. “At a roundabout, it’s designed to make you go 15 miles an hour, so the type of crashes would be less intense.”

Despite these promising statistics, roundabouts have been received with mixed acceptance among drivers.

“Some older drivers who are set in their ways don’t like them,” said David Pulay, a transportation engineer at Akron Metropolitan Area Transportation Study. “Some people have false perceptions about them and some are just afraid of them.”

Pulay said roundabouts are safer for drivers and pedestrians alike.

“With roundabouts,” he said, “pedestrians have a shorter crossing distance, and a refuge point on the island between entering and exiting traffic.”

Many air quality experts and transportation engineers, including Pulay, favor roundabouts because they lower car emissions and idling.

“Roundabouts are eco-friendly by keeping the traffic moving and eliminating the idle time at red lights or stop signs,” Pulay said. “The emissions for one vehicle sitting at a red light may not seem like much, but over a day/month/year it adds up.”

“During non-peak times of traffic, roundabouts don’t unnecessarily cause cars to have to sit, wait and idle when no other cars are coming,” Bowling said. “How many times have you driven up to a traffic light and you’re the only one sitting there? That doesn’t exist at a roundabout.”

Roundabouts have been very polarizing to people. Bowling said everyone seems to have a strong opinion either way, but whatever their opinions, roundabouts aren’t going away.

“As roundabouts continue to get installed and more people use them, I believe the barrier to people’s beliefs that they’re good or bad is going to be reduced,” he said. “As people adjust to them, people will become more accustomed to them and, therefore, they’ll be safer.”

Nate Burtzlaff is the graduate students and research/transportation reporter. Contact him at [email protected]