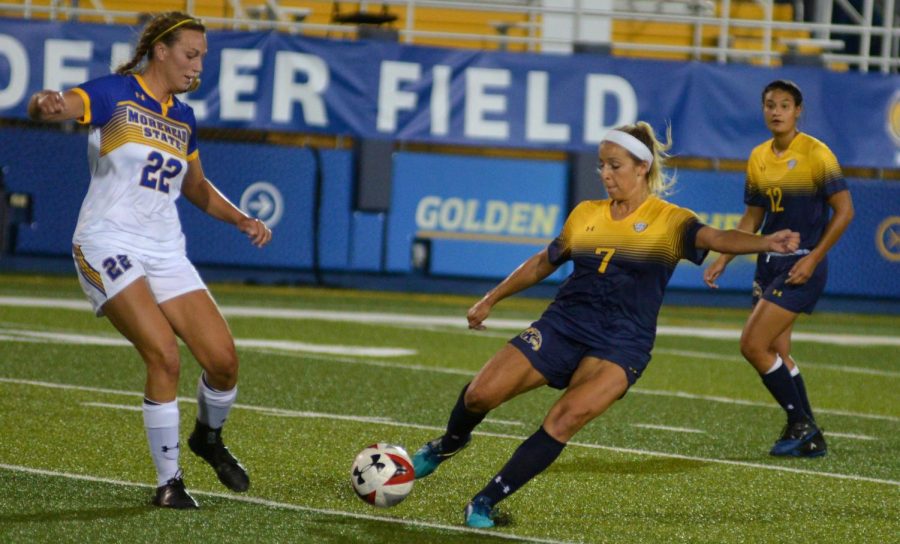 “Our confidence was building coming off of two wins, and we knew we needed to capitalize on some big opportunities to get the win against Buffalo,” coach Rob Marinaro said.

Defense remained strong against Buffalo, but it was the offense that won the game.

“The back four has been stellar all year,” Marinaro said. “This game we really capitalized on offensive opportunities.”

The Flashes started things off with a goal from sophomore forward Isabelle Mihail in the 19th minute.

Sophomore midfielder Maddie Holmes followed shortly after with a an unassisted goal in the 21st minute. In the 26th minute senior forward Dominique Dinardo scored a goal and in the 29th Mihail got her second goal of the game. The half ended after the fifth goal, scored by freshman forward Khyla Porter in the 49th minute. In addition to the five goals, the Flashes lead in shots on goal 9-3.

“This was one of the best first halves we have had this season,” Marinaro said. “We came in with a lot of energy and it showed.”

In the second half Kent State lead in shots on goal 9-3, but Buffalo managed two goals, one from Kaitlyn Walsh in the 49th minute and one from Gianna Yurchak in the 78th minute.

The Bulls comeback attempt lost steam however, with the Flashes finishing with a 5-2 win.

“We have to give credit to Buffalo for coming back and making a game of it in the second half,” Marinaro said.

Kent State has won seven straight games against the Zips.

“The game is going to come down to who is willing to play hard for 90 minutes and who gives a quality performance, ” Marinaro said.