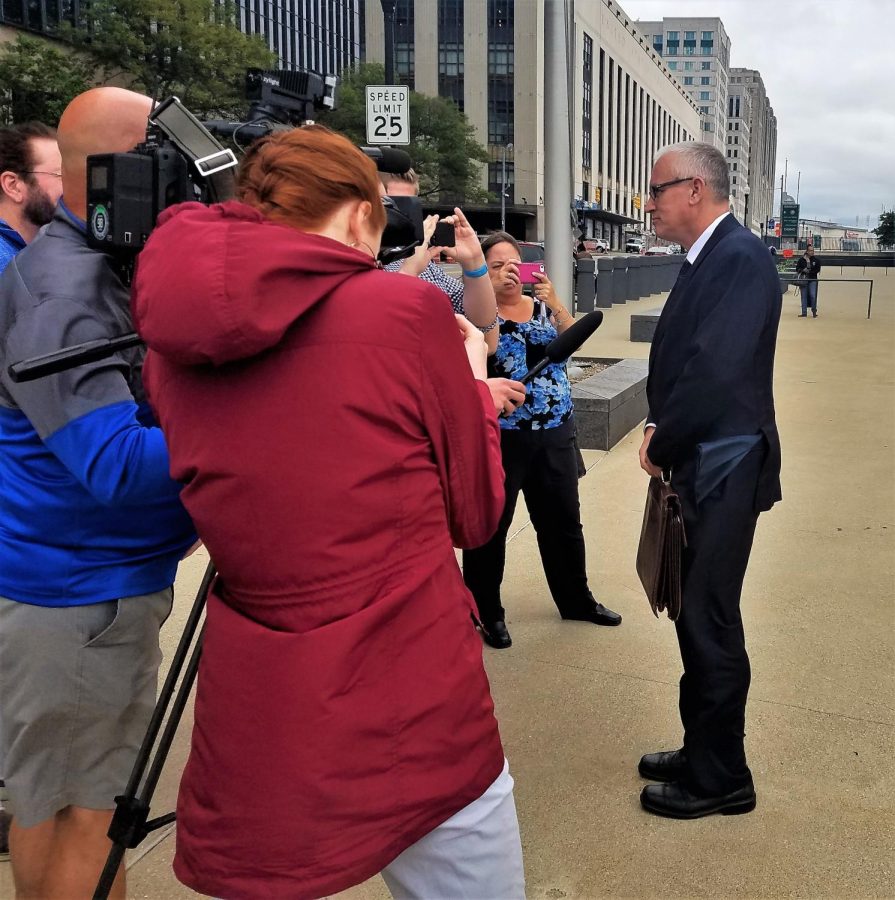 Attorney Warner Mendenhall speaks to reporters about his client, Julio Pino, outside the Carl B. Stoaks U.S. Courthouse Sept. 26, 2018.

Former Kent State history professor Julio Pino, 58, was sentenced to five months in prison, five months of house arrest, three years of probation and given a $2,500 fine Wednesday for lying to the FBI.

Pino pleaded guilty in April to making false statements to FBI agents regarding a Facebook conversation between Pino and a man identified as “J.E.” The two exchanged violent messages about J.E.’s child custody case in 2015 and 2016, according to the criminal information filed in the U.S. District Court in Cleveland.

During the conversation, J.E. threatened to “kill 100s of people if they take my rights as a father away,” according to a press release from the Department of Justice. Pino responded, “Yes, in military terms this is known as ‘the Parthian shot.’”

St. Louis authorities arrested J.E. in January 2016 after he threatened the judge involved in his child custody case on his Facebook wall. Before his arrest, J.E. also posted, “I f*****g love Julio Pino, even if he does eventually do something that most consider horrible, I’ll still love him because I know him in a deeper way than most of you even could.”

The FBI interviewed Pino following J.E.’s arrest, but Pino denied the conversations and said he had “never heard of (J.E.), well maybe I heard of him through the news.” Pino also said “It is certainly possible that he could have heard of me and made up this conversation, invented it.”

The FBI conducted an investigation of Pino throughout 2016, and Pino was charged with one count of making false statements to the FBI on April 23, 2018. He pleaded guilty in federal court on April 26, 2018,.

In remarks to the court during his sentencing, Pino said, “Making false statements violated the trust of the American Republic.” His decision to lie, he said, was “borne out of confusion and fear.”

Pino also submitted a sentencing memorandum to the court containing letters from character witnesses, including:.

A professor and chair of the history department at Kent State, Brian Hayashi, called Pino “a very peaceful individual who is respectful of the opinions of others whether they agree or disagree with him.”

Kevin Heade, a former student of Pino, wrote in the memorandum, “Prof. Pino was always supportive of his students. Prof. Pino would encourage his students to support their beliefs and historical arguments with sound research and persuasive writing.”

Tanmay Shah, another former student, wrote, “As a professor, Dr. Pino was one of the best I had the good fortune of having at Kent State. He supported his students in their pursuit of knowledge and did so in a professional manner.”

Also in the memorandum, Pino said he has health issues including “gastrointestinal pain (causing) constant pain and discomfort in the stomach, loss of appetite, nausea and symptoms like that of an ulcer,” generalized anxiety disorder (GAD), insomnia, restless leg syndrome, left-ear hearing loss due to a “cerumen impaction,” Penicillin allergy and high cholesterol, “which puts him at a higher risk of heart attacks, strokes, panic attacks and other ailments.”

During the hearing, Assistant U.S. Attorney Om Kakani said, “Mr. Pino took affirmative steps to lie to the FBI.” Kakani also noted Pino’s previous interactions with the FBI, and mentioned comments Pino made that criticized American policy and the State of Israel.

In 2002, Pino wrote an opinion column in which he praised a Palestinian suicide bomber. In 2011, Pino shouted, “Death to Israel” during a lecture at Kent State by Ishmael Khaldi, an Israeli diplomat.

In a 2014 letter to “Academic friends of Israel,” Pino accused pro-Israel academics of being “directly responsible for the murder of over 1,400 Palestinian children, women and elderly civilians” before referring to Israel as “a regime that is the spiritual heir to Nazism.” Pino signed the letter “Jihad until victory!”

Pino was investigated in 2015 and 2016 for alleged ties to the Islamic State, also known as ISIS or ISIL.

As part of his sentence, Pino will face supervised home confinement after he is released from prison. Pino must submit to mental health treatment, polygraph testing, warrantless searches and the installment of computer monitoring software.

U.S. District Court Judge Patricia Gaughan referred to Pino’s online postings as “disturbing” and said they could constitute grounds to consider him a danger to society. Gaughan later said she didn’t think Pino’s intention was to hurt others, but rather he “likes to be controversial.”

Kakani and U.S. Attorney’s Office of Public Information Officer Mike Tobin said they are satisfied with the outcome.

“It’s a negotiated plea and the judge acted within the guidelines,” Kakani said.

Pino’s attorney, Warner Mendenhall, told reporters his client, who is now off all social media platforms, does not feel unfairly targeted. When asked about Pino’s online postings, Mendenhall said, “Despite his rhetoric, (Pino) believes in nonviolent approaches to world policy.”

Pino offered his resignation to Kent State and began the retirement process after he was charged in April 2018. Pino will receive a “drastically reduced pension” according to Mendenhall.

Pino was given 30 days to self-surrender to authorities.

Editor’s note: The story was updated to clarify the testimonials to Pino were part of the sentencing memorandum he submitted prior to the hearing.

David Williams is a general assignment reporter. Contact him at [email protected]