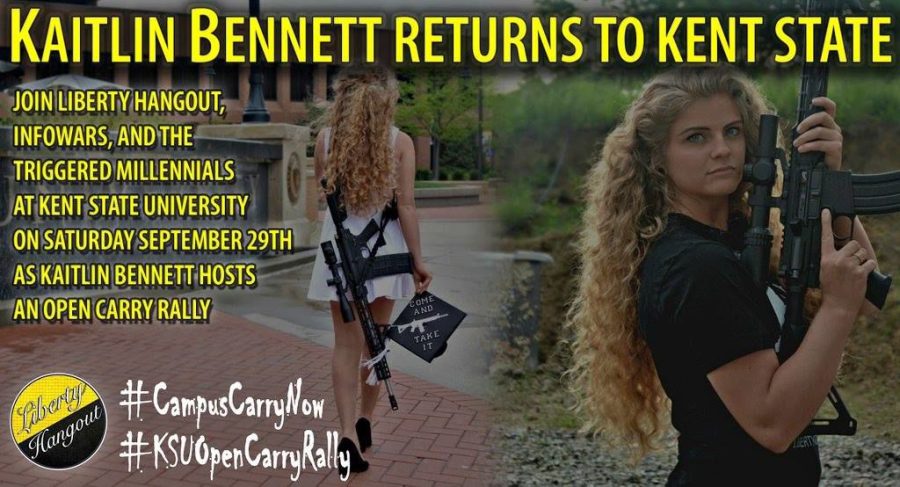 A banner used on Facebook to promote an open-carry rally hosted by Kaitlin Bennett, a Kent State alumna known for her graduation photo with an AR-10.

An anticipated open-carry walk on Kent State’s main campus that was postponed in a now-deleted tweet last night, is planned to continue as scheduled, Kaitlin Bennett said.

The Kent State alumna took to Twitter Friday evening to announce that the event she had scheduled for late September would be held off due to counter-protestors.

“This is no easy decision, but because violent counter protesters promised to disrupt my open carry walk at Kent State on 9/29 & ruin the message of #CampusCarryNow, I will be postponing it,” Bennett said in a since deleted tweet. “Preserving the integrity of the message is too important to allow it to be compromised.”

But on Saturday afternoon, Bennett tweeted that the walk will continue on and that she had made a “poor decision” in listening to the university.

I will be continuing with my open carry walk at Kent State on September 29th as planned. I look forward to seeing everyone there! pic.twitter.com/PF6nPmPhiE

Bennett announced in early August she was hosting an open-carry rally at Kent State to promote discussion about campus carry.

The university issued a “cease and desist” letter on Aug. 29 asking Bennett to stop advertising the event on social media.

After Liberty Hangout, a conservative student organization, sponsored the rally, the university sent an invoice for $14,000 for security costs. Bennett then cancelled the event’s speakers and turned the rally into a walk.

Bennett planned to have gun rights advocates speak about the Second Amendment, including Millie Weaver from Infowars and Joey Gibson from Patriot Prayer.

Gibson organized a rally in Portland, Oregon, in June that turned into a riot and sent five people to the hospital.

Black Lives Matter announced a “No Fascists on Campus” event for the same day on Facebook in an attempt to counter protest the event, particularly Gibson’s presence at the university.

“The rally is not anti 2nd amendment but is anti hate, anti white supremacy and against unfair policies used to victimize Persons of Color,” the event description said. “The legitimacy of 2nd amendment rights is undeniable but we can and will support the Kent State Students in their resistance to hate and fascism as promoted by the likes of Joey Gibson.”