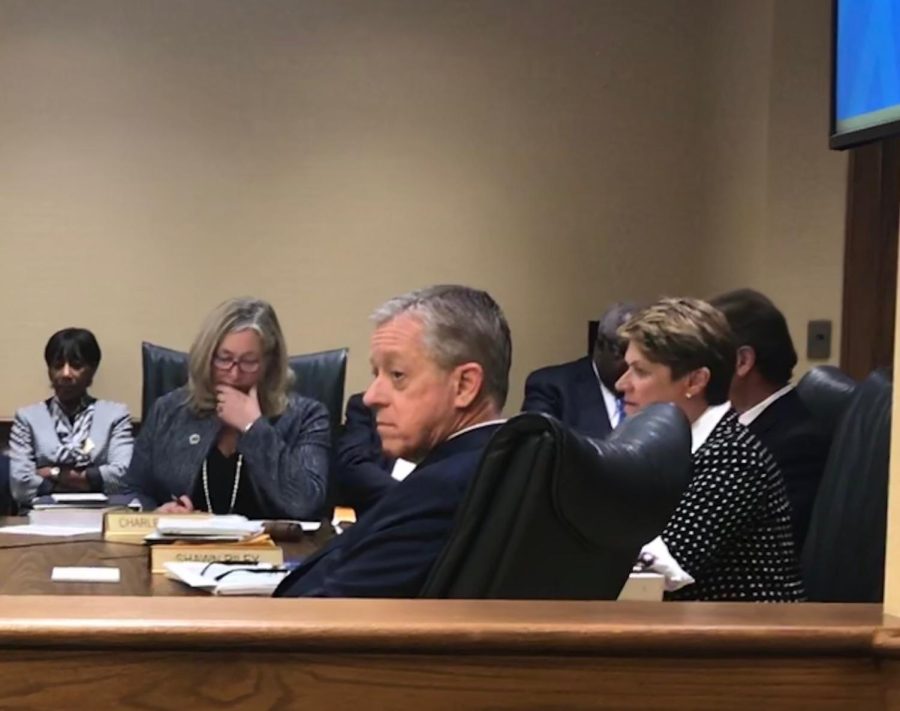 President Beverly Warren addresses the Board of Trustees on Wednesday.

Diacon and other administrators officially reported university enrollment numbers to the trustees’ Academic Excellence and Student Success Committee. On Monday, President Beverly Warren announced at the Faculty Senate meeting the overall enrollment dropped about 800 students, but the 2018 freshmen class was the largest in school history.

The official number for the class was 4,363, about 100 students more than last year.

“This has been a record-setting and phenomenal year,” he said, adding many departments worked together to help reach the record retention.

Eboni Pringle is dean of the University College, which coordinates many of Kent State’s retention activities. She outlined three initiatives she said were key to the increased retention. They were:

Counselors and faculty worked with students who they feared might get in academic trouble.

Pringle said the university used data to identify 3,500 students who were at risk for dropping or failing a course — which she said meant the students could leave the school entirely. She said they identify courses that students most often struggle in.

“There are courses where at least 30 percent of students will receive a D, F or withdraw from the courses,” Pringle said. “And we reached out to them one by one and introduced these students to free academic resources on campus,” especially tutoring.

Retention among those students rose 5 percent over the previous year.

A donation from the KeyBank Foundation allowed the university to work with 424 of the “most at-risk” students to bring to campus for a special summer program to let them catch up on classes.

“We know that if students don’t complete 30 hours by the start of their second year here, it’s highly unlikely” they’re going to graduate, Pringle said.

They identified first-year students in the College of Nursing who looked unlikely to make the school’s 3.8 GPA cutoff to advance in the program.

They met with students and their parents to talk about other options still in health care, like speech pathology, health care administration and public health.

Retention among those students was 81 percent — 15 points higher than it had been in previous years.

Diacon said university efforts to keep students on track for graduation increased the number of students finishing in four years by an all-time high of 47 percent. (About 59 percent graduate in six years.)

Among underrepresented students — including people from low-income backgrounds or first-generation students — four-year graduation rates hit 37.5 percent, 10 percent higher than in 2010.

Warren told the committee she thought the increase was “incredible.” Pringle later added retention among underrepresented men was now almost the same as women. Two years ago, the gap was 13 percent.

That’s another reason why students are graduating more quickly, he said.

Diacon and Pringle said increased retention was great for the university and students, but it also cut into revenue because students who graduate on time don’t have to come back and pay tuition in the fifth or sixth year.

Efforts were focused on students from western Pennsylvania and Michigan.

“We did a number of things we had not previously done to communicate with them through advertising and digital and social media,” Clarke said.

Admission officers focused on developing relationships with high schools in those areas.

More than 500 incoming freshmen from southwest Michigan and western Pennsylvania registered for orientation, a 13 percent increase over 2017.

The university offered out-of-state students scholarships that could cut their tuition to about the same as major universities in their own state.

“So we advertised to them to say, ‘Maybe Penn State isn’t exactly where you want to be,’” Clarke said. “You can come to Kent State for … fellowships that would make it very affordable and comprehensive to have that incredible big college experience in a very nurturing environment. It worked very, very well for us.”

Clarke called the campaign a “slightly quirky way” to engage incoming students. It was especially designed to help reach students who had been admitted but eventually went somewhere else.

The Brain Campaign reached 51,073 total views across all social media platforms, with an emphasis on Twitter and Facebook.

Morgan Hallam is a recruiting and retention reporter. Contact her at [email protected]