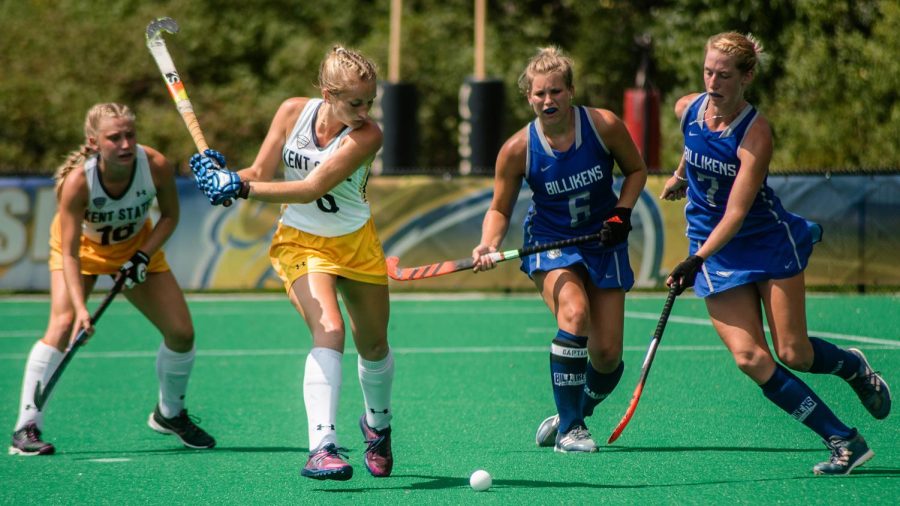 Offense is something the Kent State field hockey (3-9, 1-1 Mid-American Conference) has struggled with all season.

It appeared that the Flashes were on their way to their third win of the season, but Longwood’s Olivia Wawrzyniak had other plans.

That didn’t stop the Flashes.

Sophomore back Emma Bressler scored in the second overtime, sending the Flashes to a 3-2 victory.

“We played really well defensively and implemented a lot of that team defending, small team unit defense that we worked on all week,” coach Kathleen Wiler said. “We were definitely stronger on the ball and finishing.”

The Flashes offense didn’t waste any time on Sunday. In the 16th minute, senior forward Jessica Apelt got a long pass from Helena Soler to score the first goal of the game.

Carrying the lead into the second half, the Flashes couldn’t hold off the Lancers. In the 39th minute, Briana Greene passed the ball from the top of the circle to Sophia Defeo, who scored her second goal of the season.

The Flashes answered two minutes later when Courtney Weise passed the ball to Jessica Apelt to score her second goal of the game. “I think just as a team and an attacking unit, we found some really good passes and movements from forwards and was able to finish two goals,” Wiler said. “I think as a whole, it was just a good team performance.”

Junior goalie Mary Crumlish had five saves on an afternoon where the Lancers out shot the Flashes 15-12.