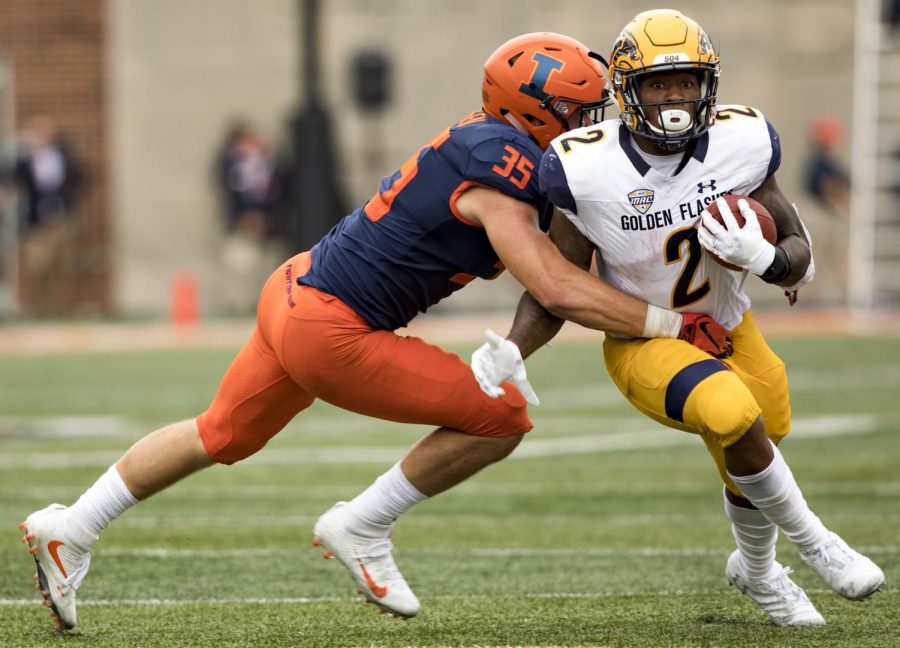 Illinois linebacker Jake Hansen tackles Kent State running back Will Mathews during the first half of the Flashes matchup against the Fighting Illini at Memorial Stadium in Champaign, Illinois on Sept. 1, 2018. The Flashes lost 31-24.

The Kent State football team (1-3) played Saturday’s game against Ole Miss the same way they have played every loss this season: a strong first half combined with an underwhelming second half.

“It’s kind of been the story in these power ball games in the first half,” coach Sean Lewis said. “We’re right there knocking on the door, and we have to find a way to overcome and persevere and knock down that wall.”

In total, the Rebels recorded 651 yards Saturday in a 38-17 victory over the Flashes.

Kent State was able to tie things up in the second quarter after a slow start offensively. The team got on the board in the second with some trickery: Sophomore quarterback Woody Barrett tossed the ball outside to junior wide receiver Kavious Price who then threw it to the end zone for junior running back Jo-El Shaw for an 18-yard touchdown.

“It’s not a gadget play; it’s what we do,” Lewis said.  “It’s a part of our team. Obviously, one of our core values is to have fun. This game is a beautiful game. We enjoy playing it, and as many different ways that we can get guys to spread the wealth and enjoy the fun of throwing touchdown passes, we are going to do that.”

The game was tied, 7-7, heading into the locker room, a rather unconventional start for two teams that feature up-tempo offenses. It was also unconventional because of a 53-minute lightning delay at halftime that seemed to slow both offenses.

The Flashes’ offense accumulated 390 total yards on the day. Barrett accounted for 277 yards despite being under heavy pressure in the backfield for most of the afternoon. He was sacked seven times, which tied the season-high.

“They have a good front, and they got to some rush packages where they put all of their defensive ends in, and they won some one-on-one matchups up front,” Lewis said. “We have to do a better job. It’s kind of a similar story as Penn State.”

Despite all their offensive shortcomings, the Flashes only found themselves down, 24-17, heading into the fourth quarter.

Another lightning delay stopped play; this time for an hour and 43 minutes.

The Flashes’ offense was unable to hold onto the ball during the fourth quarter as they only had possession for 4 minutes and 36 seconds, which allowed the Rebels to wear down the Flashes’ defense.

The Flashes will take the field at 3:30 p.m. as they open conference play against Ball State (1-3) in Scheumann Stadium.

Ian Kreider is the sports editor. Contact him at [email protected]