OPINION: America was never great. May 4 is proof of that. 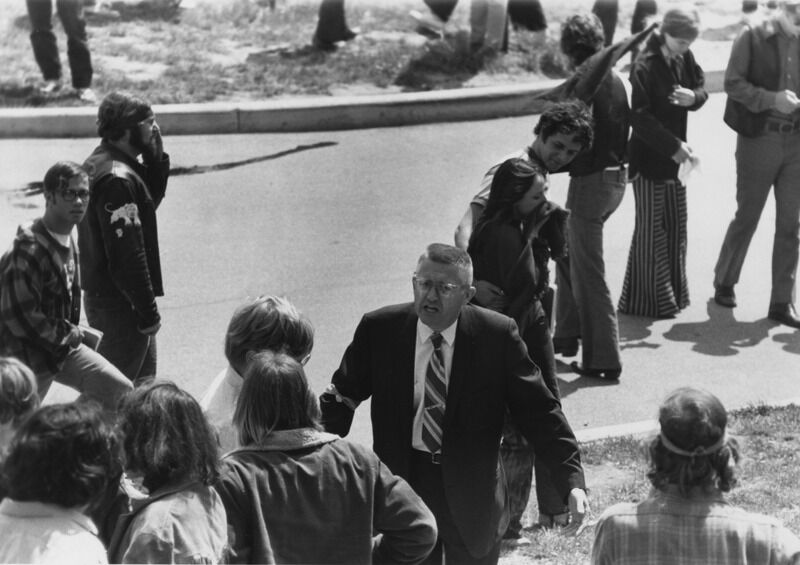 After the National Guard fired on May 4, Professor Glenn Frank used a bullhorn to tell the students, "I am begging you right now if you don’t disperse right now they’re going to move in, and it can only be a slaughter."

Last week in my Opinion Writing class, my professor played a clip about May 4 from Ken Burns’ documentary, “The Vietnam War.”

We saw all the images we’ve come to associate with that day: the National Guard pivoting, Mary Ann Vecchio howling over the body of Jeffrey Miller, a near-hysterical Glenn Frank begging students to abandon the protest, now.

Sometimes I think I’ve seen these images so many times I’ve become numb to the violence they captured. But occasionally, the horror of that day breaks through.

And it’s a horror that continues today: we’re still finding ways to villainize young people, shoot them, leave their bodies on the pavement for their families to howl over and exonerate their killers.

Being a Kent State student means being reminded every May 4 how little those in power value certain human lives and how they often sneer at the idea of being held accountable for ending those lives.

Being a Kent State student means being keenly aware that violence — and giving violence a pass — is our legacy as white people in the United States.

When my professor asked what about the documentary resonated with us, the first classmate to raise his hand said, “Well, you have to remember. The National Guard was only there because the students lit a building on fire.”

All those images of bleeding humans, collapsed humans, humans in distress, and he wanted to comment on a pile of bricks and steel.

He might as well have said, “Of course, they deserved to die! Someone burned down a building, after all.”

The impulse to excuse and rationalize away wrongdoings is something many of us learned first from our parents and later, our peers. I should know. I used to do it too. And we continue with it because it is much easier than the alternative — admitting the power structures we live under and benefit from are cruel, reflecting on why that is and doing what we can to hold them accountable.

Often the excusing and rationalizing entail bringing up property in discussions about human lives, as my classmate did.

For instance, this summer, when someone said, “Tear gas, a weapon that has been banned in war, is inhumane to use on protesters,” I heard the excuse, “What about the rioters who burned buildings and looted Target?”

The implication was, “Of course, they deserved to get hurt! Someone stole a TV, after all.”

But when the majority of protesters are found to be peaceful, this argument makes no sense. Why is it rational to fire biologically harmful chemicals into a crowd of unarmed people?

Why was it rational to fire 67 rounds into a crowd of mostly non-combative teens and 20-somethings protesting the war?

But like I said, it’s easier to rationalize that the students somehow deserved it rather than admit the government was acting immorally. Because if the government acted immorally, you would have to incorporate that incompatible realization into your otherwise good opinion of the government, and that takes work.

I’ve been thinking lately about a question I heard one of my classmates ask: “The phrase ‘Make America Great Again’ implies the United States was great before. But was it? And if so, when?”

I’ve drawn a lot of my ideas about ethics from the philosopher John Rawls, who said the great society is the one that puts the needs of the neediest first. That is to say, no society can be great until its most marginalized citizens’ need for safety is met.

The United States has never been a safe place for its non-white citizens. Even for white dissenters who refused to play along and tolerate the government’s hand in Vietnam, it wasn’t safe. For some, it was lethal.

This year, as I reflect on that day in our nation’s history, I’m reminded we have a long way to go before we can be great. And it’s not going to happen until we care more about protecting humans than we care about protecting property.

We will not be great until we stop making excuses for killers and the systems that give them a pass.

Lyndsey Brennan is an opinion writer. Contact her at [email protected]