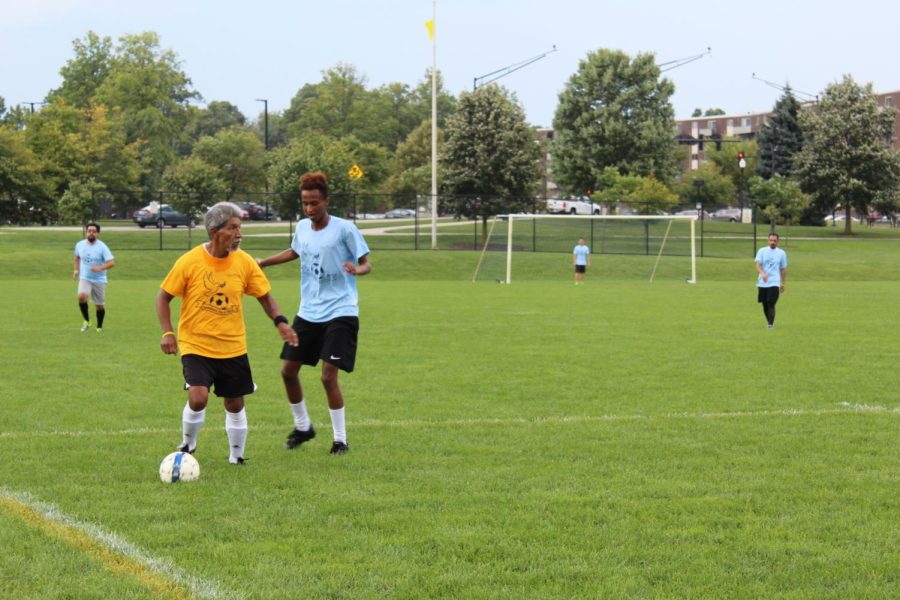 A player looks to pass at the International Day of Peace soccer tournament on Saturday, September 22, 2018.

Kent State brought international students, alumni, staff and scholars together to celebrate peace through sport at the International Day of Peace soccer tournament on Saturday.

Sept. 21 is a day that the United Nations and the General Assembly declared as a day of peace around the world. Kent State and the Center for International and Intercultural Education decided to commemorate this day with a game that is known and played across all nations — soccer.

“We realized that on the International Day of Peace, everywhere in the world, people play friendly soccer games in celebration of peace. So, we wanted to bring that back to Kent State,” said Abdoulaye Fall, a graduate assistant in the Read Center for International and Intercultural Education who helped plan the event.

“Soccer really does bring people all over the world together,” said Gustavo Stille, the associate director of international alumni relations. “You go to refugee camps and you see kids play soccer, there have been U.S. versus Iran soccer games when people are able to put differences aside to play what’s called ‘a beautiful game.’”

Stille explained that the slogan for soccer is “fair play” and that peace and soccer are very intertwined in that aspect.

Many countries and nationalities were represented at the tournament. Fall himself is from Senegal along with players from Brazil, Colombia, Venezuela, Saudi Arabia, China and Iraq, just to name a few. Also included were domestic students, alumni, staff and scholars.

In addition to the soccer tournament, other events occurred to celebrate this day of peace such as a discussion about the Universal Declaration of Children’s Rights and America’s failure to rectify this declaration, a poem writing event hosted by the Wick Poetry Center, and a discussion of sport diplomacy. Also, before the soccer tournament, there was a planned moment of silence and a ringing of the bell to recognize that there is more to be done to promote peace.

“If you’re doing a moment of silence for peace, you’re basically recognizing that we have work to do still in the world,” Stille said.

Stille also mentioned that for soccer, in general, a moment of silence pays respects to people that have been lost, and in this case, it paid respect to those who have been lost in conflicts all around the world.

While the tournament was anticipated to be much larger, the weather interfered with the original plans and the games were cut short to avoid the storms. Though the weather was not ideal, it did not hinder the efforts made by participants and volunteers to make this day happen.

The Alumni Association team ended up being undefeated in the tournament but every team got a chance to pose with the championship trophy: a dove carrying an olive branch. The overall message was not to select a winner but to celebrate peace and to have fun.

For more information about the International Day of Peace, visit the United Nations website at http://www.un.org/en/events/peaceday/

Krista Renaldo is the homecoming, alumni affairs and fundraising reporter. Contact her at [email protected]