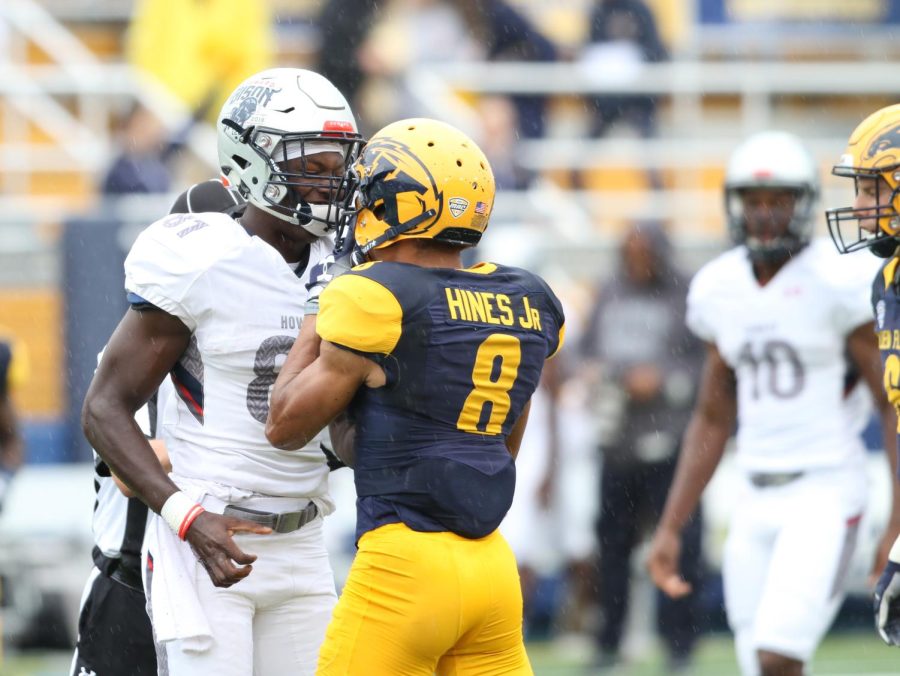 1.     It was a game that saw Kent State record 54 points, 511 total yards, seven touchdowns, a field goal and a safety. It was also a game where the Flashes committed 15 penalties, lost three fumbles and threw an interception.

2.     In the end, it was a 54-14 Kent State victory over Howard. Not only was it the first win of the new “”FlashFAST” era, but it was also the first career victory for new coach Sean Lewis.

3.     While it might not have been the cleanest win in any capacity, it was a win. And for a Kent State football program that’s been starving for a semblance of gridiron success, a win is a step in the right direction.

4.     “Really pleased with how we played in all three phases with our attitude and the effort,” Lewis said. “We still have a lot of things we need to clean up. Way too many penalties, way too many turnovers, but those are things we can get controlled and get rectified.”

5.     Lewis is right, the Flashes do have to work on their penalties. The Flashes had 15 penalties for 150 yards, five of which came on special teams plays. The game was sloppy on both sides. The Bison committed 11 penalties of their own, and this, combined with numerous replay reviews and injuries, led to a nearly four-hour long game.

6.     Somehow, the Flashes put up 54 points, but they still ran fewer plays than last week against Illinois. The Flashes ran 81 plays Saturday — two fewer than they had against the Fighting Illini.

7.     A big reason for that was the Flashes’ ability to hit on big plays, something they couldn’t do against the Illini. Justin Rankin broke loose for a 61-yard touchdown run. Jo-El Shaw had a 55-yard run on a drive that resulted in a score. And, for the first time all year, Woody Barrett connected on a deep ball, finding Isaiah McKoy for a 42-yard touchdown.

8.     “We always want to have the ability to stretch the field and force the defense from the line of scrimmage to the goal line,” Lewis said. “Now that we’ve actually completed (a downfield shot), it’s become a part of who we are, it’s not just a wish and a hope. It was great to get that connection.”

9.     Barrett opened the scoring with a three-yard rushing touchdown. While his line (13-for-27 for 156 yards, an interception and the aforementioned touchdown) might not be impressive, it looks as if the game is starting to slow down for him. Barrett’s interception was picked off at the line, and he still seems to have trouble with consistency, but he looks more and more the part.

10.  “That’s Woody Barrett, man,” Rankin said laughing. “Can’t go wrong with Woody B. I love watching Woody play, he’s a great playmaker. He puts us all in the places we need to be.”

11.  Rankin did his best to put the Flashes in the places they needed to be. He finished with 147 yards rushing, which is not only his career-high, but also his first 100-yard game on the ground. Rankin’s elusiveness and ability to run through arm tackles was evident Saturday, and he looks to have the perfect complement in Shaw. Shaw broke off a 15-yard touchdown run with his first ever touch for the Flashes, finishing with 105 yards rushing and three touchdowns.

12.  The Flashes used Shaw out of the wildcat three times against the Bison, one of which was his first touchdown run. Most of Rankin’s running was done going north to south in the trenches, while Shaw bounced most of his runs outside. After last week’s game, Lewis said he wanted to do a better job of empathizing the running game, and this week the Flashes did that.

13.  The Flashes’ defense stepped up to the occasion Saturday. Both Jamal Parker and Juantez McRae intercepted Newton’s passes. Darryl Marshall continued his stellar start to the season with a crucial blocked punt in the first quarter. Elvis Hines forced a safety when he rushed Newton into an intentional grounding in the end zone.

14.  Hines has really impressed me so far this season. He’s built off a strong rookie campaign, and he is gearing up to follow in line as Kent State’s next great defensive back. He spent Saturday making plays and spent a good chunk of time letting the Howard wide receivers know about it.

15.  Last year, Newton gashed the Flashes for 225 yards and three touchdowns when they faced off. This year was a different story. The Flashes’ constant pressure never allowed for Newton to get comfortable in the pocket. Four Flashes recorded sacks and Theo Majette had two quarterback hits. The Flashes’ defense has been heavy on the pressure in their first two games, and that looks to be a trend all season.

17.  That being said, the Flashes still have some areas to address. Howard had some big gains negated by penalties, and the Flashes can’t expect to beat an FBS school when they lose three fumbles.

18.  But for now, it’s another step in the right direction. Last week was as close to a moral victory as you’ll come in college football — this week was an actual victory. Lewis has said he wants his team to get better every week, and they’ve done that thus far. We’ll see if they can continue that trend against Penn State next week. The Flashes lost, 33-13, to PSU two years ago in a game that was tied at halftime. A close showing against the Nittany Lions will go a long way to having people take Kent State football serious — a victory would guarantee that.

19.  Kick-off is set for next Saturday at noon. I’ll be in Austin for the Online News Association Conference, so I won’t be there, but keep with Ian Kreider for all the Kent State football coverage you’ll need from Happy Valley. Talk to you next week.