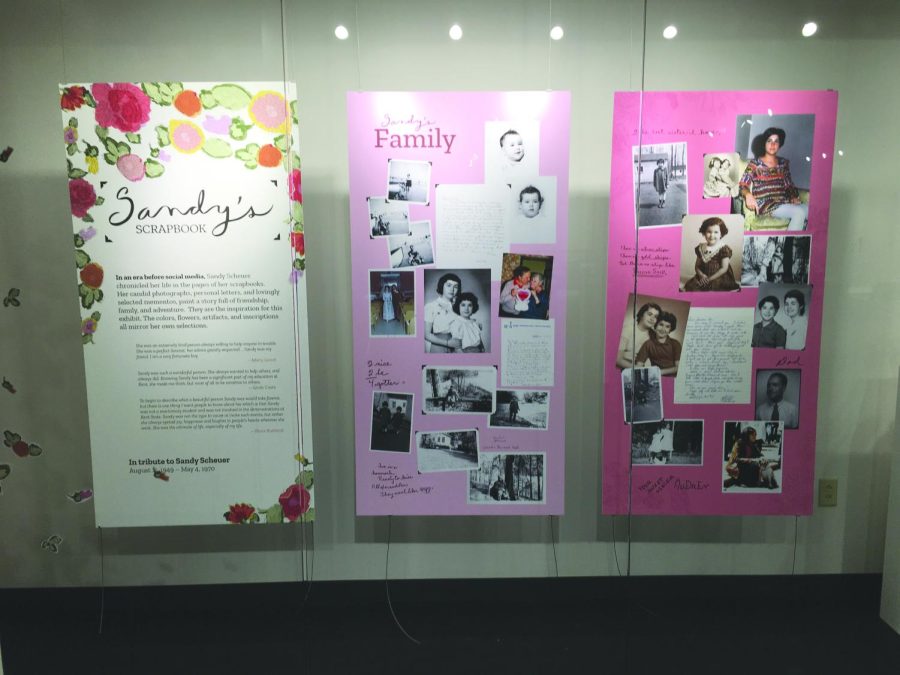 Memorials displayed as a part of “Sandy’s Scrapbook,” a memorial dedicated to Sandy Scheuer.

This fall, upward of 170 First Year Experience classes will visit the May 4 Visitors Center as part of their curriculum. It’s there that many of them will get their first true taste of the history of May 4, wandering through the exhibits before watching the Visitors Center’s documentary video on the actual events.

Mindy Farmer understands how important student activism is. As the director of the May 4 Visitors Center, Farmer recognizes Kent State’s place in the history of democracy and the Visitors Center’s place in keeping that history alive.

This fall, the Visitors Center will be opening this exhibit on Allison Krause; the second of their four exhibits focusing on each of the students who died on May 4, 1970.

“There are a couple of new things in this exhibit that we’re excited for,” Farmer said. “We have some films of Allison marching in the 1969 moratorium march. We have a photo of that in the Visitors Center, but we’ve since found two films. The whole exhibit will be designed around a film strip theme.”

The first installment in this series of exhibits focused on Sandy Scheuer and was titled “Sandy’s Scrapbook.” Prior to that exhibit, the Visitors Center had an exhibit focused on the First Amendment, as well as previous exhibits on Cambodia as well as international rights.

Both Krause and William Knox Schneider were 19 when they were shot and killed on May 4, 1970, while Scheuer and Jeffrey Miller were 20, meaning that none of them would have been able to vote at the time of their deaths.

“This year, because of what’s happening in society and with the midterm elections, we really wanted to focus on voting and voting rights,” Farmer said. “We’re doing this in a nonpartisan way. We don’t really care for who students vote for, but students have historically not voted. This is a memorial to democracy.”

Students in “First Year Experience” courses will visit the Visitors Center in the fall, visiting both the actual exhibits and the special section dedicated to Krause. Outside of the new videos, visitors will also see images from Krause’s life, as well some pieces of homework and other items that were important to her.

“(Embracing May 4) is not the norm in Kent State’s history,” Farmer said. “They’ve struggled in the past to come to terms with this, and we are in a time where they’re embracing the legacy, and we have President Beverly Warren and Provost Todd Diacon to thank for that.”

For Farmer, the Visitors Center also plays another important role in the history of May 4 — humanizing the victims.

“We want to show them as people,” Farmer said. “Interesting, love, daughters, girlfriends. They were so much more important than the day they died.”