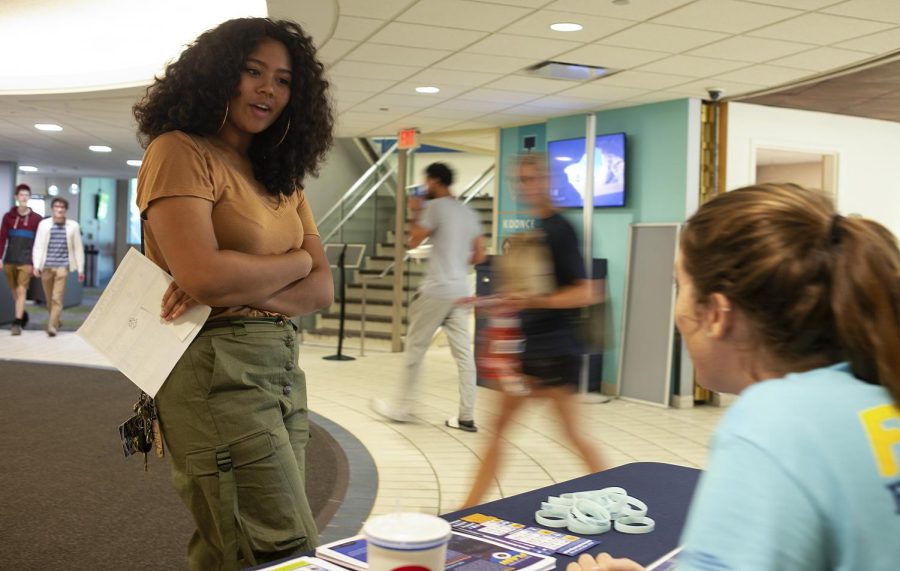 The first night of the fall semester at Kent State ended with many hungry, angry students who took their complaints to social media as the university unveiled its new meal plans.

Students hopped between the three lines that snaked around the Rotunda of Tri-Towers; a rope cut off access to the entrance of Rosie’s Diner as one employee ran orders from the pickup counter to the mass of annoyed students and back.

Several times last week, students fed up with long wait times at Eastway Fresh Food Company attempted to sneak inside through the second-floor entrance near the balcony, sending alarms booming through the dining hall as hungry students’ eyes turned to them.

A student posted a video to Twitter showing an overcrowded Rosie’s Diner in Tri-Towers, which quickly caught the attention of other students. Another student commented below the post:

“This is a serious problem. I waited over an hour for a burger and fries, and fries were cold.”

The university explained its decision to adopt the new meal plans, which are comprised of meal swipes and all-you-can-eat options.

The new swiping system, along with Declining Balance Dollars, is part of the meal plan changes Kent State implemented this fall. Students living on campus are required to purchase a meal plan, but commuters and students living off campus are exempt.

Shay Little, the vice president of student affairs, said the changes to meal plans came about because of Kent State’s transition into a dining partnership with Aramark LLC, a food and beverage service provider. The Board of Trustees approved the partnership between Dining Services and Aramark in March 2017.

She said the university took into account students’ input last year before making the transition to the all-you-can-eat dining halls and renovations.

Beginning last fall and spanning through the spring, Dining Services and dining hall architects met with students multiple times to discuss an “enhanced dining experience for the future.”

Dining Services hosted information sessions in dining halls for students, where they interacted with staff about their experiences eating on campus, though it’s not clear how many students participated.

“I would say there were hundreds (of students),” Little said. “I visited with student organizations in the fall and the spring in addition to multiple KIC (Kent Interhall Council) meetings where there would be anywhere from 50 to 80 students at the KIC meetings. And then we met with the Student Athlete Advisory Committee. … Do I have a complete list with the number total? No.”

This past spring, Eastway Fresh Food Company dedicated a day for students to test out the all-you-can-eat option, which they paid for with Declining Balance Dollars.

Since move-in day on Aug. 19, students have expressed frustration regarding the new meal plans. Some have taken to social media to voice their concerns, and when KentWired asked for comments on the meal plans Thursday morning, it received an outpouring of anger.

KentWired found the majority of students who shared their opinions are displeased with the university.

“The new plan is absolutely terrible,” said Emily Jones, a sophomore psychology major. “The portions are a quarter of the size they were last year, the food tastes worse than last year and it feels like a waste of money because I have no desire to even eat on campus.”

“The old meal plan, in my eyes, was more like the real world,” she said. “You have a set amount of money and were given the freedom to pick how and where you spent it. It taught us responsibility and taught us to keep track of our spending. With a swipe, we just swipe in and pay no attention to how much money we are spending because it is not real money.”

In the comments, one student wrote:

In a direct message to KentWired, senior communications studies major JaLynn Hairston said she wishes the university took into account students in the Fashion School with “jam-packed schedules” before changing the meal plans.

“As many of our faculty push for this to be a ‘students first’ campus, this is slowly becoming about money and power,” she said. “This university no longer accepts the way students feel. … As we wish that they will change the meal plan, they won’t because of higher education politics.”

Beetler said he was compelled to make the petition because he heard people around him speaking negatively about the meal plans, but nobody taking action.

“I was expecting it to blow over and not gain much attention, but the fact that it has shows how passionate KSU students are about making a change,” Beetler said.

KentWired emailed Mike Mesenbrink, the resident district manager of Aramark. After initially agreeing to a request for an interview, Mesenbrink failed to respond to multiple follow-up emails. Neither Dining Services’ website nor the university directory list a phone number for Mesenbrink.

KentWired also left messages with Dining Services’ main office and Kelly Connelly, the administrative assistant of Aramark, but the calls were not returned.

Little reiterated the meal plans were “developed with student input” and resources were provided to inform students about the incoming changes, which was “ongoing throughout the year.”

“We had handouts at all those information sessions, and particularly once the Board of Trustees approved the room and board rates for this year as they do in the spring, we actually handed out more materials after that, which included the prices that were approved,” she said.

Little added Residence Services shared information about meal plans with students during their discussions covering room sign-ups. During Destination Kent State orientations this summer, incoming students and parents had a chance to eat lunch and dinner in The Market on the second floor of the Student Center due to renovations at Eastway Fresh Food Company.

“The dining staff was there greeting everyone and answering questions and handing out more materials to the first-year students and their families,” she said. “So those are the key ways that we shared information last year about the choices that students had.”

Some disgruntled students told KentWired they were frustrated about the new policy on takeout boxes. Students with meal plans have the option of purchasing a reusable to-go container for $5, similar to a deposit. During each visit to Eastway Fresh Food Company, The Market or Prentice Cafe, they are required to return the box to the dining hall before they can grab a new, clean one. Because of food safety issues, Dining Services will properly clean the containers.

“If I want to take food on the go (which most of the time is required), I have to pay the school extra money for the to-go boxes,” Downin said in a direct message. “I can’t even use my own. I’m just very upset about the whole thing.”

Little said she personally saw these containers in use last fall at Clemson University, “and the students love them there.”

“Aramark at other institutions has had very good success at these reusable containers — it reduces waste and it allows students flexibility to take advantage of the all-you-care-to-eat facility while taking a managed portion of food out of the dining hall,” Little said.

Little added dining halls will also offer biodegradable, one-time use boxes for $1, which are a better option for students who want takeout “every now and then.”

Little, along with the dean of students, said she plans to meet with student organizations and leaders in the coming weeks to gain feedback about the meal plans.