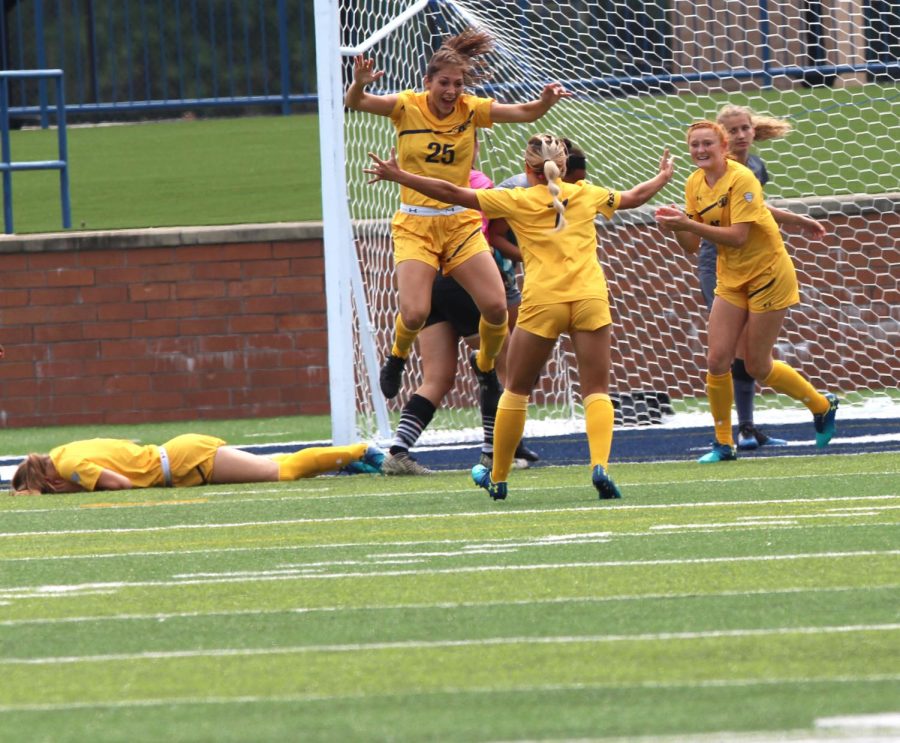 When Autumn Meisenburg saw her shot nestle in the bottom left corner in the 88th minute, all she could do was turn, throw her arms toward the heavens and breathe a heavy sigh of relief.

Until that point, the Kent State women’s soccer team had had an incredibly frustrating day, peppering the St. Bonaventure goal with 25 shots and 14 corner kicks, but the Flashes couldn’t break the 1-1 tie. Meisenburg’s goal, the first of the freshman’s career, sent the Flashes into jubilation, celebrating the deciding goal in a 2-1 win, the team’s first of the year.

“It was so crazy,” Meisenburg said. “Honestly, I don’t even remember the goal. Just seeing, when I turned around, seeing everyone running toward me made me so happy.”

Kent State (1-1-0) opened the scoring almost immediately, tallying a goal in the second minute. Yasmine Hall, a problem down the right flank for the Bonnies (0-1-1) all day, won a free kick from about 25 yards out. Senior defender Paige Culver put a ball into the penalty area, where St. Bonaventure junior goalkeeper Lauren Malcolm came to collect.

Malcolm went to punch the ball out of her area, but collided with Kent State forward Isabelle Mihail. In the scrum that followed, Flashes senior midfielder Cassandra Sauter cleaned up the rebound for her first goal at Kent State.

Mihail stayed down after the play and had to leave the game momentarily, but would return about 10 minutes later.

Sauter, a team captain, said she was impressed with the team’s response in the early minutes of the game, especially coming off of a 3-1 loss to Butler on Thursday night.

“We put one away early, and that goal came from everyone driving forward and winning balls in the air,” Sauter said. “We didn’t want a repeat of what happened against Butler. We just stuck together, just kept driving at the net.”

The Flashes dominated possession for the rest of the first half, but couldn’t break through for a second goal as the half ended, 1-0.

Kent State came out flat at the beginning of the second half. In the 59th minute, St. Bonaventure tied the game at 1 after a cross from freshman midfielder Mia Thatcher found Sydney Cerza at the back post for her second goal of the season.

“We’ve got to do a whole lot better in our 90 minutes,” Kent State coach Rob Marinaro said. “I think we played good in waves, and it wasn’t good enough for us. We’ll go back at it and see if we can go with more consistency through all 90 minutes.”

The next 20 minutes for the Flashes were filled with missed opportunities and dozens of chances. There were multiple instances where Mihail dribbled past two or three defenders down the left wing and crossed the ball into the middle only for no Kent State players to be there for the tap-in. Mihail also hit the crossbar in the 79th minute, while Hall saw her strikes saved three times, finishing the game with seven total shots.

Meisenburg’s strike in the 89th minute sealed the win.

Marinaro said, despite the frustration building after not taking advantage of opportunities, he was happy with his team’s resiliency.

“You’ve got to give us credit for battling,” Marinaro said. “Once it went 1-1, you saw our game elevate, and we kind of took over a little bit. We put a lot of pressure on them.”

Marinaro continued to point to consistency as the main area the Flashes will need to improve going forward.

“Once the game changed a little bit, we got a lot more movement out of our wing-backs and our forwards,” Marinaro said. “That’s what we need through 90 minutes. Once we get kids moving and battling, we’re going to get some opportunities because we can be pretty dangerous moving forward. We just didn’t get enough individual battle out of our kids for all 90 minutes.”

The Flashes hit the road this weekend for two away games, the first of which will be across state lines against the University of Pittsburgh at 5 p.m. Friday. The Flashes beat the Panthers last season, 1-0, behind Isabelle Mihail’s first career goal.

Cameron Hoover is the managing editor. Contact him at [email protected]