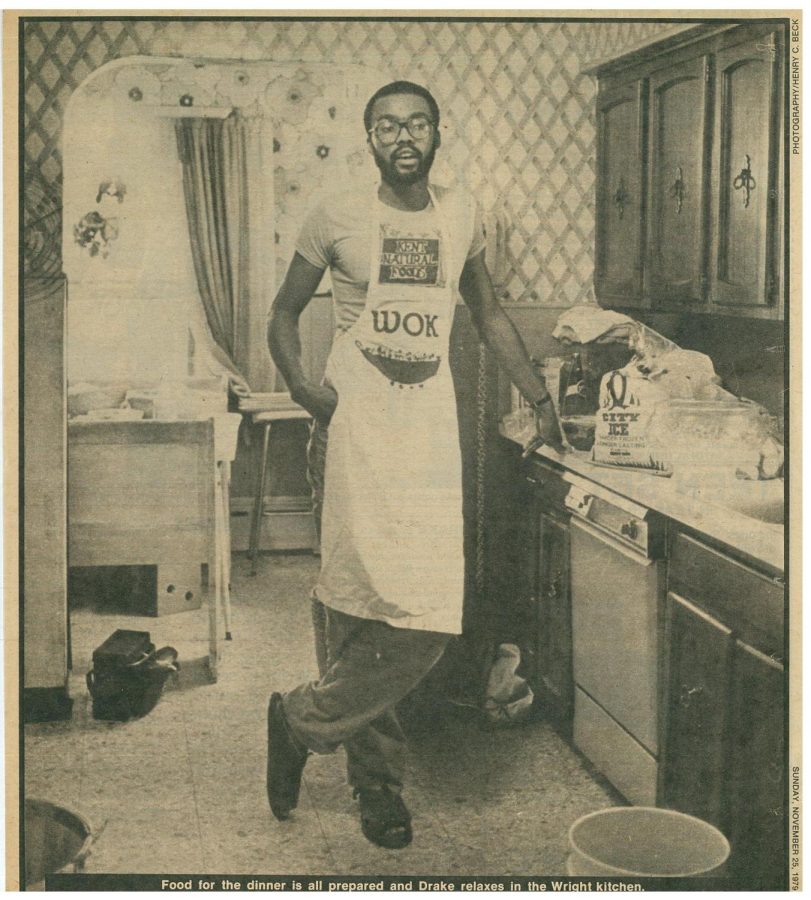 Uncle Mo stands in a kitchen after catering while wearing his “Kent Natural Foods” shirt in 1979.

Long-time Kent resident Maurice Drake’s native tongue is food. He speaks through a sizzling skillet. His voice, like crackling bread, has been familiar in the community since he moved to Kent in 1971.

Better known as Uncle Mo, some describe Drake as a mentor, friend and chef. Now, he’s preparing to take on a new title as the owner of Uncle Mo’s Pea Pie Cafe, a food truck that will soon travel across the United States.

Drake’s community relationships have led to the creation of his upcoming food truck. The idea began when his late friend Steve Moore gifted Drake a truck for his business six years ago.

Before this, he hadn’t considered a food truck, but after doing some research, it seemed like the perfect opportunity. Drake plans to convert the diesel-powered vehicle to use alternative fuel.

Drake has been making pea pies since he was 25, and the community is familiar with his signature dish. In those days, he would drive a 1953 Dodge pickup truck to festivals and happenings in Kent to showcase his baked goods. The black eyed peas, brown rice, peppers, onions and untold spices folded into a flatbread became an instant hit around Kent.

When Drake isn’t constructing his truck, he works on a ranch and at other various jobs. His role in the community hasn’t stopped at food. Mo recently retired from Happy Days, where he was a bus driver for 18 years. He also taught at a Catholic school for a period of time. Drake worked with recovering addicts at Coleman Professional Services for seven years, and found passion in the work after he got clean from heroin and alcohol addiction in 1985.

He moved to Kent to study outdoor education at the university in 1971. Drake quickly became immersed in the city and started attending community dinners, where he met a collection of people who owned a bakery, food and clothing store. With large framed glasses and an afro, Drake fit perfectly into the crowd as a young radical. He began working with the collective by making bread at the bakery. Though at the time he was unaware of it, the bakery was the beginning of his 40-year relationship with food in Kent.

Drake was not new to cooking when he arrived to the baking scene. He was well-acquainted with the oven in Cleveland, his childhood home.

“I learned how to bake when I was a kid,” Drake said. “My father cooked really good and my mother was a baker, and I loved to cook so they let me experiment. I think I made pumpkin bread. My father ate it, but no one else would. It was terrible.”

Today, his roots still influence his strictly vegetarian cooking. Drake grew up with asthma and allergies. He remembers being sick throughout most of his childhood, but when he met a couple who encouraged him to remove meat from his diet at 19, his health improve drastically.

Forty-nine years ago, the young family from California needed a place to park their van, which they were living in at the time, and Drake made friends with them.

Before long, they noticed his snoring each morning, which was frequent with his allergies. One day they approached him and said, “We hear you every night. Have you ever thought about being a vegetarian? You should try it. We will help you out.”

“Food is medicine,” Drake said. “When I changed my diet and developed a healthy relationship with food, my immune system got stronger.”

Since moving to Kent, Drake has made a large footprint on the organic food community. He and two others bought the collective bakery, and by the mid-’70s, he was a co-owner of Peaceable Kingdom Bakery.

When he wasn’t in school or partying, Drake bounced all over the food industry in Kent. He was a chef at Red Radish, a vegetarian restaurant, and owned his own catering service known as Nature’s Way Vegetarian Catering.

In 1973, he cooked for civil rights leader Angela Davis when she made an appearance in Kent.

“She had just got out of prison and I fed her vegetarian dishes,” Drake said. “Years later she came on campus to speak. I was there to see her, and she said to me, ‘Hey, vegetarian man, you fed me 25 years ago.’”

Folks don’t only recognize Drake because of his influence on food, but also for his influence on people. He wears many hats aside from his baker’s cap, and though he has been a frequent traveler throughout his life, his relationship with the community has kept him in Kent for over 40 years.

“Community is how we grow; it’s how we learn who we are,” Drake said. “You gotta love yourself, but you gotta love others. You can’t be some holy man living up in the mountains with nobody around. What good is that? You gotta be in the world.”

Many of his lasting relationships are with others from the food collective, which is now the Kent Natural Foods Co-op downtown. That’s where he met Jeff Ingram, the owner of Standing Rock Cultural Arts. Ingram was surrounded by organic lemons and boxed tea when he was introduced to Drake in 1997.

Ingram said Drake is a part-time comedian and part-time chef. Art, fresh food and laughs have filled their 21 years of friendship.

“Mo is a gold star member of the true friend society,” Ingram said. “He really cares about good food and bringing good food to the community. I think there’s a void of that in Kent right now.”

Ingram has worked alongside Drake by organizing events and creating a GoFundMe for the truck, which is primarily being financed by the fundraising. They require $10,000 to finish the construction of the truck, and Drake hopes to have it finished by the end of summer.

“Sometimes I wonder why the food truck is taking so long and why stuff keeps happening, but sometimes stuff just happens,” Drake said.“I remind myself that I’ve got it made compared to others.”

Daniel Ryan, another member of the co-op, met Drake in 1984 when he baked Ryan a three-tiered carrot wedding cake. Drake always enters the co-op with a smile, he said.

“He’s such a charismatic figure,” Ryan said. “The place has a little hit of love each and every time he visits.”

Drake said once the food truck is completed, he will travel the country with the truck and a small crew. Yet the community knows that Drake won’t stay away from Kent long. The city will remain a homebase.

“When I got sober, I realized what one love meant and that doing stuff for other people comes back to you,” Drake said. “The universe gives back to you.”

Taylor Patterson is the business and downtown reporter. Contact her at [email protected]