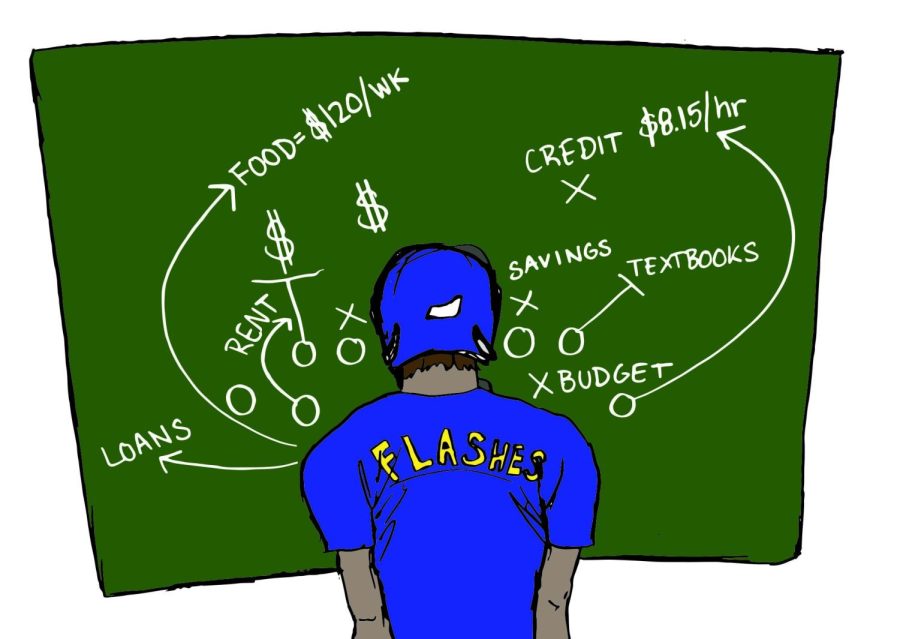 Playing a sport at a high level would be challenging by itself, but student-athletes have to balance education with attempting to earn financial aid in order to attend school.

The total cost of living on Kent’s campus is about $25,586 for in-state students, according to the university’s website. This price rises to $34,118 for out-of-state students. Scholarships are the key to a college education for many students, but the need for aid is magnified for student-athletes.

This makes life especially challenging for walk-ons and others attempting to earn an athletic scholarship. This is the reality for walk-on freshman basketball guard Margaux Eibel.

“I came here originally for the fashion school, but basketball was something that I was looking into,” Eibel said. “I didn’t necessarily know if they were holding tryouts.”

She also noted that since she was not on scholarship she was unable to tour the athletic facilities or meet the members of the team during her visit.

“I expected it to be scary, in a sense, to come in and not know anyone,” she said. “It was awesome; they were very supportive and welcoming, probably one of the most welcoming teams I’ve been on.”

She played 23 minutes this season and a season-high 11 minutes in a loss against Miami (OH). She continues to improve her craft over the offseason in an attempt to earn more playing time and potentially a scholarship.

“My main focus is to get in and work hard and help the team out in any way I can,” she said.

Her story is similar to many of Kent State’s athletes who have to earn a scholarship after their first season.

Senior linebacker Matt Bahr is now a team captain with new head coach Sean Lewis already singing his praises, but Bahr was not always a star. There was a time when he was battling for a scholarship.

He started his career as a redshirt freshman, and by the next season he earned a spot on special teams.

“We tried to be special team warriors there and that’s what earned me a scholarship.”

Life before he earned his scholarship was constant work: school work, football and a factory job during breaks from school. He would budget by cutting back on food.

“I think the biggest part is that before you’re on scholarship your love for the game is tested,” he said. “You don’t get to eat at the training table with the guys who are getting food. The scholarship guys get treated a little differently. You’re a walk-on so you’re the tackling dummy during a lot of stuff.”

According to a Kent State annual report from July 28, 2017, “Student-athletes graduate at a 16 percent higher rate than the general student body.”

Graduation is the goal of every college student and clearly student-athletes are no different. Financial aid is the pathway to reach that goal, while also giving them the ability to allot more time for their sport.