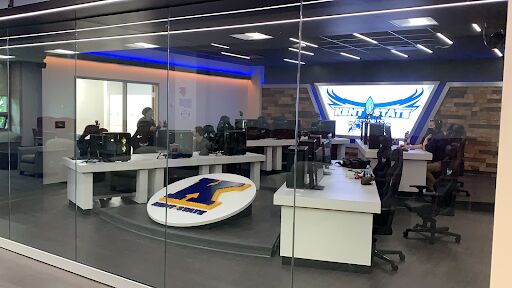 When Paul Rondeau came to Kent State, he was in the ROTC and was planning on pursuing a military career, but when his captain told him he needed extra points to get into a specific branch, he decided to found a club that would change his life.

Rondeau founded the League of Legends club at Kent, and it quickly grew to have more than 300 members before merging with the already established esports club. After uniting, the esports club grew to have over 1,000 members, according to Rondeau.

Now, like many others, he is planning on pursuing a career in esports, specifically event planning.

“So it kind of just took off, and I think because of that passion I had for it, this is what I want to do now; I don’t want to do anything else,” Rondeau said. “I just kind of dropped everything. I put all my eggs into the basket for esports.”

Collegiate esports growth and popularity have been rapidly on the rise in the past four years. Clubs similar to the one at Kent State have gone from having small club matches between friends to building arenas and handing out varsity scholarships.

Colleges around the country, including Kent State, use esports as a tool to engage students in campus life and activities and provide support for higher education and careers in the industry.

Because of Rondeau’s immersion in the esports club, he decided to do his practicum with AllMid, an esports event planning company.

“Through AllMid, I learned a lot about how to coordinate games like Warzone, Rocket League Fortnite, and there were a bunch of other games,” Rondeau said.

The esports club at Kent State seeks to put players and staff in an environment similar to the professional scene, according to Ben Vrobel, the social media manager for the club.

Vrobel, like Rondeau, didn’t know what he wanted to do before he started playing varsity Rocket League and working for the club.

“I want to do something more involving the PR field, like doing social media managing, like what I do right now, or even doing like corporate PR for an organization like that,” Vrobel said. “But I think doing it in the esports scene would just be more fun because I’m more well acquainted with everything in the scene compared to a corporate PR job.”

For Vrobel, the esports club showed him what he wanted to do and allowed him to gain experience in his new desired field.

“I would definitely not be in the position that I am right now without this club,” said Vrobel. “It’s given me a lot of opportunities like this social media managing job. I took it as something I wanted to do because I was interested in it. But I didn’t know if I want to do it, you know what I mean? But I think getting the work experience and then dealing with people in the organization and talking to people outside of it. It really makes me realize that this is an industry that I’d love to do work in for the future.”

College esports programs like the one at Kent State have been popping up around the country. One of the most successful and well-known programs is run by the University of Akron.

Hunter Walls-Wood is a coach for Akron’s esports program, where he acts as more of a “team dad” as opposed to the traditional sports coach. “That’s the best way to really explain,” Walls-Wood said. “I oversee all of our varsity players on campus.”

“I saw esports go from the basement to stadiums,” Walls-Wood said. “I played amateur slash semi-pro Call of Duty for about six years growing up. So, when I was 15, I started traveling to different tournaments.”

“It’s not our goal as a program to make students go pro; our first and foremost goal is for them to graduate,” said Walls-Wood. “I wasn’t here when the program started, but we never expected to win national championships and do that. Looking from the outside, it’s just like ‘kids here in Akron are really good at video games.’”

“So I think collegiate is a stepping stone, sometimes it’s a starting point where people realize ‘OK, this is what I want to do,’ and then sometimes, it’s a stepping stone where people are really good at the game, and they can potentially get picked up from pro teams,” said Chayton Hamric, a player for the University of Akron’s Rainbow Six Siege team.

“I think that when people first think of esports, the only direction that they see is like, ‘I have to be a professional player or a coach.’ But that’s not the case,” Rondeau said. “Realistically, it could be almost anything, every single job outside of Esports: journalism, graphic design, human resources, marketing, anything, they all have their own branch in esports in some way.”