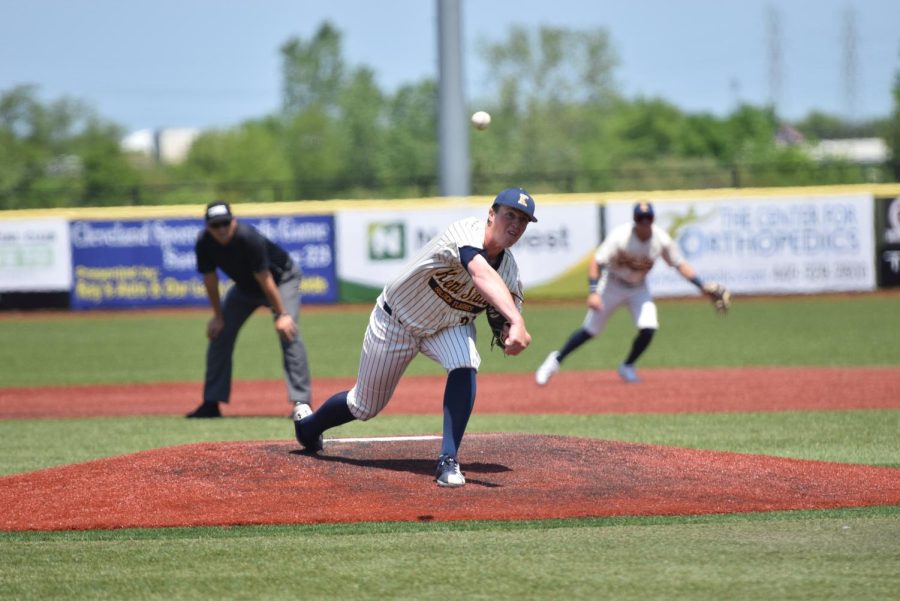 Junior Joey Murray pitches in the first inning of their MAC tournament matchup against Central Michigan on Thursday.

Kent State starter Joey Murray survived a rocky start to toss 6 1/3 strong innings in the Flashes’ 8-7 victory over Central Michigan in their MAC tournament on Thursday at Sprenger Stadium in Avon, Ohio.

Murray was shaky in the first inning, allowing a walk to Central Michigan leadoff man Zach Heeke, who promptly stole second. Murray, however, did get out of the first inning with a 6-4-3 double play.

Central Michigan would strike first in the top of the third inning thanks to an RBI single from Daniel Robinson.

Kent State would get the leadoff man aboard in the bottom of the third inning when Josh Hollander reached on an error and Mason Mamarella was hit by a pitch.

The Flashes broke through on a ground rule double by Pavin Parks that brought in Hollander to tie it, then a fielders choice by Central Michigan who could not apply the tag on Mamarella in time. Kent State would score on another run on a sacrifice bunt to make it 3-1 in the bottom of the third inning.

However, Kent State added two more runs in the bottom of the fifth inning thanks to a Pavin Parks triple to make it 5-1. Pete Schuler’s sacrifice fly to left field brought in Parks home to give them a 6-1 lead.

Kent State would tack on a couple of more insurance runs in the bottom of the sixth inning to make it an 8-1 lead.

Despite Murray’s struggles to find command, he still struck out seven batters on the day and also only gave up one run and two hits. Murray also recorded his 139th strikeout this season, which ties the Mid-American Conference single season strikeout record.

“It’s not even this year, he’s the reigning MAC pitcher of the year, which is an unbelievable feat,” Duncan said. “For a guy that has got it one time, with all the scouting reports that go on, everybody gets hyped up to face him. He’s just a tremendous pitcher and has had a great career and great year for us this year.”

The Chippewas roughed up the Flashes bullpen for five runs in the ninth inning, with Kent reliever Collin Romel striking out CMU’s David Cole with the tying run on second base.

Duncan talked about how Central Michigan came back in the ninth inning.

“Central Michigan did a really good job they really see a lot of pitches offensively and obviously they did a great job getting back into that game there in the ninth,” Duncan said. “We just kept battling, kept wanting pitches and found a way to get it done.”

Kent State will advance and play tomorrow night at 6 p.m. with the opponent still to be determined.

Simon Hannig is an assigning editor. Contact him at sha[email protected]