New College of Business Administration building design to be selected 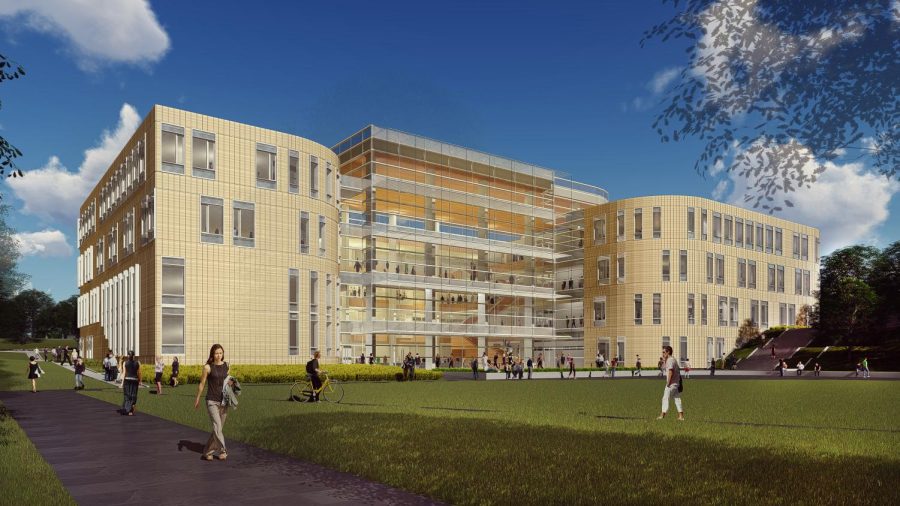 The proposed exterior design from Hemingway Development for the new College of Business and Administration building.

The first major project of Kent State’s $1 billion Master Plan has been set into motion as four development firms compete to develop the new College of Business Administration building.

The Kent State community got a first look on Thursday at four different visions for the upcoming building from Hemingway Development, Pizzuti Companies, Oxford Development and Signet Real Estate.

Despite coming from different developers, all of the designs feature the same theme of open floor plans, natural lighting and innovative spaces for students to learn and socialize.

“Even though all of the schemes look very different on the surface, I think they all share in dissolving the traditional boundaries of the way education takes place,” said Craig Copeland of Pelli Clarke Pelli and Hemingway Development.

The new building was proposed to be a part of the university’s Master Plan due to the current building having insufficient space for students and outdated facilities and design.

“A building shouldn’t feel like a symmetrical cement box, it should be exploding with energy,” said Bernardo Fort-Brescia, an architect for Arquitectonica.

A variety of classrooms and learning laboratories, faculty offices, student gathering and study spaces and other common areas are all features that will be incorporated in the new building.

“Each development team brings an innovative approach and unique vision to what they see as the new home for one of the university’s cornerstone programs,” Deborah F. Spake, the dean of the College of Business Administration, said in a press release.

The university’s Master Plan serves to transform campus and improve student and faculty life through new and improved facilities over 10 years. The plan was approved by the Board of Trustees in March.

The university has developed a relationship with the Kent State community to make decisions regarding the Master Plan, and the new building will serve as an example of that open communication.

“The entire Kent State community has been a part of the Master Plan process from the beginning, so it makes sense that we would offer everyone a chance to see what kind of ideas are being considered,” Spake said in a press release.

The building will be located on Main Street, and is said to be the anchor of other transformations that will be taking place on Front Campus, such as additional green spaces, a parking deck and a gateway arch to act as a main entrance to campus.

The building proposals will be narrowed down to two firms, from which one will be recommended to the Board of Trustees in May.

Lily Nickel is the business and downtown reporter. Contact her at [email protected]