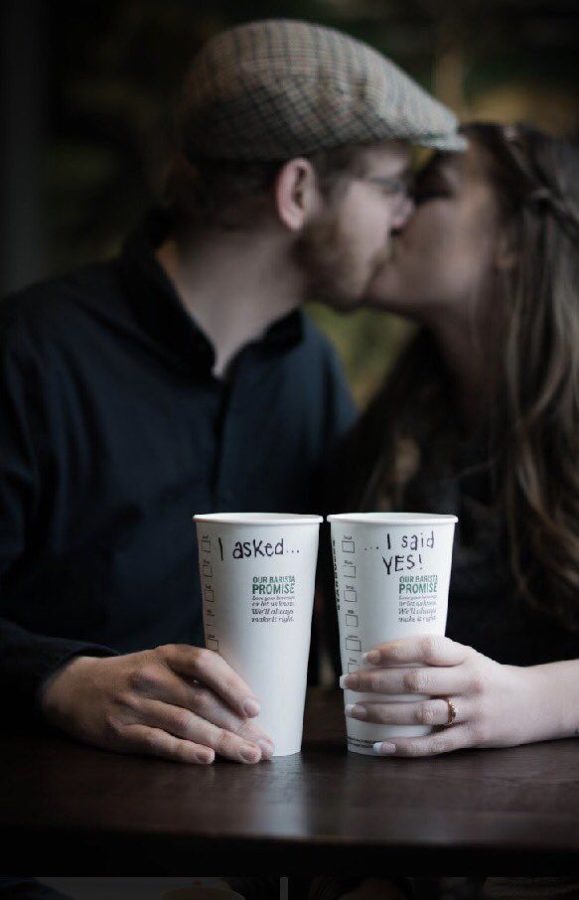 The couple poses for a photo with their Starbucks drinks.

On April 3, senior Emily McMahan tweeted: “We met working as baristas — I never thought Starbucks would change my life but I am so thankful it did,” with photos of her and fiancé Kale Bandy embracing with coffee cups in hand.

McMahan knew the tweet might be popular, but she never expected Starbucks to retweet it two days later, bringing national attention to her engagement photos. The couple was soon featured by Fox News, The Daily Meal and several smaller news outlets.

“I’m a public relations major, so I was kind of like, ‘I’m definitely going to make this tweet perfect so that Starbucks would love it,’” McMahan said. Her strategy worked, but the amount of notice it received was completely unforeseen.

“It kind of spiraled really quickly, and I have no idea why,” McMahan said. Perhaps the attention came from the couple’s story, which sounds like the plot of a romantic comedy.

“For me, it was love at first sight,” Bandy said. In summer 2017, he was a supervisor at a Bowling Green Starbucks, and McMahan was new in town. She had moved into her friend’s apartment for the summer and got a job as a barista.

“I taught her how to do the drive-through, and I was a nervous wreck the whole time,” he said. “I was doing weird things with my hands, leaning on stuff I never leaned on, being overly joking.”

Over the course of the summer, the pair grew closer, and they officially started dating in July.

Bandy made plans to propose in early March. He hoped to stage a public proposal after a concert by one of McMahan’s favorite bands, The Oh Hellos, but events didn’t happen as planned.

“What I had originally planned was to meet the band and get them to take a picture with us, then (propose),” Bandy said. “But the band never came out, so I didn’t get to do that.”

He decided to wait until they got back to her parents’ house to pop the question, but McMahan, oblivious to his intentions, was in no hurry.

“The whole way home, she was determined to get a shamrock shake, because it was right at the beginning of March,” he said. “We had to go to two or three McDonald’s to find it.”

When they finally got back, Bandy asked McMahan to marry him, and she said yes.

When it came time for the couple to take engagement photos, McMahan turned to her best friend Rebekah Martin, who captured them at places that were significant in their relationship.

“Starbucks is where we met and got to know each other, so that was really important to us, and that’s where we wanted to have some of them taken” McMahan said. They also got pictures at date spots like the Toledo Art Museum and Toledo Botanical Garden, but those didn’t garner as much attention.

McMahan plans to graduate after the upcoming fall semester, and the wedding is planned shortly afterwards in February.

While neither of them work at Starbucks anymore, both McMahan and Bandy still have love for the coffee chain, even if they can’t always remember its lengthy drink names.

“My favorite drink is probably the Hazelnut Mocha Macchiato, the Coconut M-,” McMahan stuttered, before Bandy stepped in, “Coconut Milk Mocha Macchiato, or something like that. It’s a really long name.”

Dylan Reynolds is a feature writer. Contact him at [email protected]