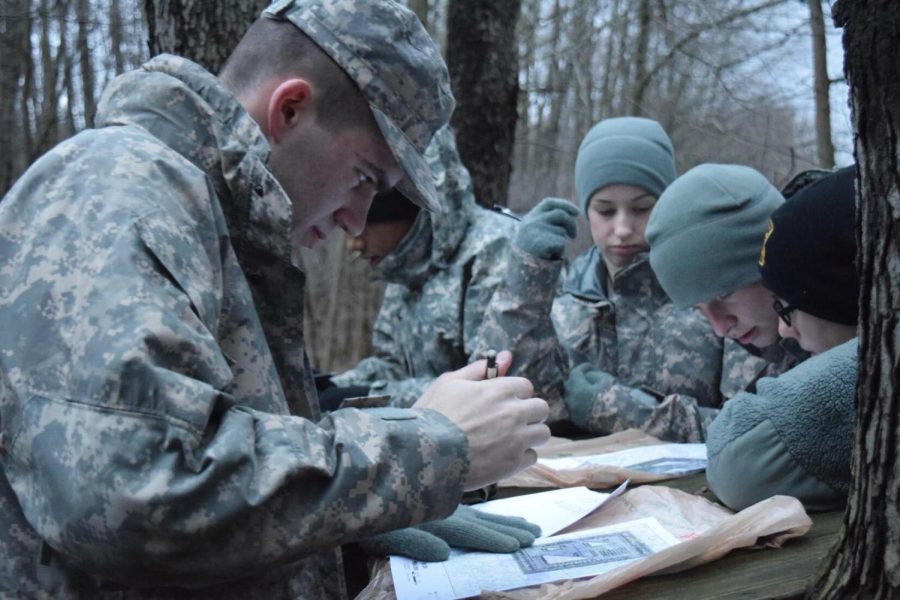 Cadets gather in the woods to map out their coordinates for the land navigation lab. Visible: Blake Bishop, a political science major and freshman cadet.

Grass squished under their boots as cadets paced the muddy field of Allerton Sports Complex with maps and compasses in hand.

Land navigation requires cadets to maneuver across an area without using a GPS for direction.

They rely solely on maps and compasses to carry them from one point to another.

“If you’re in an unknown territory and don’t know where you’re located, you can use your compass and map to figure out where you are and how to get to where you need to be,” said Alexandra Reich, a fashion merchandising major and senior cadet.

Freshman and sophomore cadets split into multiple groups to accomplish their objectives. They took a pace count, which required them to take a hundred steps by counting the times their left foot hit the ground. This helped them keep track of the land they covered.

After taking pace counts, cadets used their protractors and compasses to plot their coordinates on maps. They marked their current location and found the points of the direction they wanted to travel, said Dylan Hicks, an applied conflict management major and sophomore cadet.

“If they’re lost and all they have is a map, they can look around and figure out where they are,” Hicks said.

During land navigation, cadets get acquainted with different terrains, which are the physical features of a stretch of land. They are identified the same on all maps.

There are eight terrain features: hills, ridges, valleys, saddles, depressions, draws, spurs and cliffs. Cadets familiarize themselves with these features to know how to recognize them on maps and navigate through them.

“It’s very important to be familiar with terrain features because you might be on a hill; there might be ditches or rivers, and you have to know how to get across them. You never know where the enemy line may be at,” said Kendrick Johnson, a business management major and sophomore cadet.

Understanding terrain features helps cadets get accustomed to knowing their way through different territories. Cadets learn to work with what little they have to accomplish their mission.

“There’s a two-dimensional setting in the sense that you have just your map, and you have multiple tools that you have to use …  to create a plan. The same way you would with any other problems, you want to get an idea before you just jump right into it,” said Nathan Brown, a political science major and senior cadet.

One of the things that makes a good officer is being able to think about a problem on multiple levels, and that’s what land navigation teaches, Brown said.

The lab also prepares cadets for camp, where they will conquer land navigation on a more complex level. The hands-on practice allows cadets to refresh and test their knowledge every so often.

“It’s just like a job or a skill, like playing basketball. If you don’t practice it, you forget it,” Johnson said.

Through hail and howling winds, cadets stayed focused on the task at hand and navigated through mucky woods to complete their objective. The lab, which was specified for freshman and sophomore cadets, trained them on the basic steps of land navigation and helped get them comfortable with using a map and compass.

“In general, the overall theme is just to be able to methodically find your way through a problem regardless of how it looks,” Brown said, “even though every single time you do it, it’s going to be different.”

Mariah Hicks is the military and veterans reporter. Contact her at [email protected]