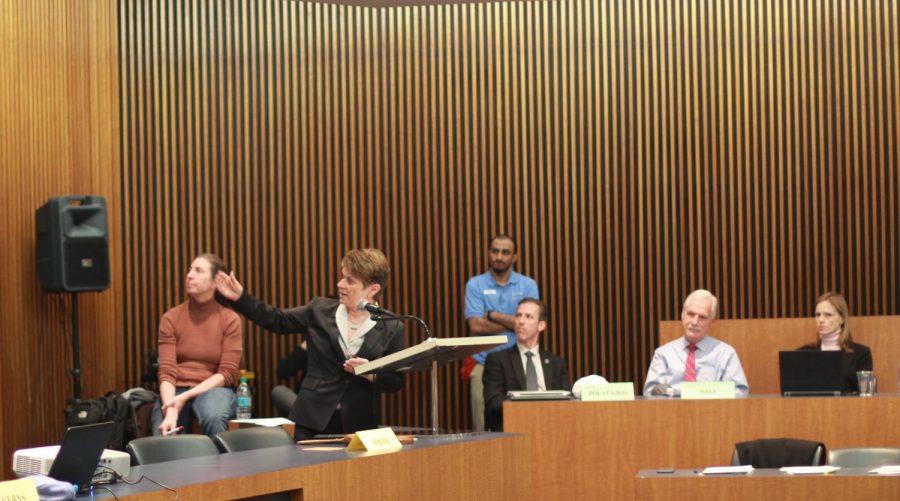 President Beverly Warren presents a slideshow on the university's 10-year, $1.2 billion Master Plan to members of Faculty Senate at a meeting Monday, April 9, 2018.

Many universities across the country have policies limiting consensual relationships between professors and students, which has long been a controversial topic. Kent State is joining the effort to clearly define guidelines for relationships where conflicts of interest may arise. Faculty Senate approved a policy Monday that would ban faculty members from dating students they are teaching at the time ­— with rare exceptions, that is.

The student-faculty rules are part of a larger policy designed to regulate relations where a “power differential” exists in which one person could use their job as a lever in their relationship with another, or a person could exploit a personal relationship to achieve a professional goal, such as a better grade or a promotion.

In plain terms, Faculty Senate chair Deb Smith said faculty should not be in a relationship, either a dating or family relationship, with someone they’re evaluating, period.

In an earlier interview, Smith said there might be cases when avoiding the situation might be difficult or impossible.

“There are cases, and graduate students might be one of them, where a family member or somebody that you’re dating might be in a academic program, and you might be the only person that offers a required class,” Smith said.

The policy states that even if a faculty member isn’t teaching a student at the time, he or she should tell their supervisor about any relationship.

“In all cases, the faculty member’s academic unit or campus administrator shall be informed by the faculty member in writing of the consensual relationship with a student so that appropriate measures may be taken to prevent exploitation, favoritism or other conflicts of interest, actual or perceived,” the policy states.

At its February meeting, some senators suggested the policy should be expanded to include all university employees.

But, Smith said after she met with Susan Roxburgh, Faculty Senate’s chair of the Professional Standards Committee, along with with members of the administration, they decided to devise two different policies.

Smith said a single policy was discarded because there are significant differences between faculty and non-faculty employees.

“Non-faculty employees really can only be in one type of relationship differential of power, and that’s basically the supervisor-supervisee position, whereas faculty stand in that relationship to a bunch of people,” Smith said. “So we stand in supervisee-supervisor relations with our chairs, our directors, our college and campus deans, our GAs, our post-docs. … We, of course, stand in the student-teacher relationship to dozens if not hundreds of individuals each year.”

Kent State administrators are currently working on a policy for non-faculty, Smith said.

Any university-wide policy will not come to Faculty Senate, as members don’t have a say in policies governing non-faculty.

The new policy still must be approved by the Board of Trustees, which meets June 6.

President’s remarks on the Master Plan

A summary included cost of specific “transformational projects” for the first time:

A $72 million new College of Business Administration Building east of White Hall, which would headline the new entrance to front campus.A $45 million “innovation hub” that will rehabilitate the Art Building would include studio space and dining.A $21 million building for interdisciplinary studios tailored for fashion and architecture students.A $6 million addition to the Aeronautics and Technology Building.A $6.5 million classroom building at the KSU Airport.A $10 million addition and renovation of Rockwell Hall to accommodate increased enrollment in the Fashion School.An $8 million renovation of White Hall, which houses the College of Education, Health and Human Services.A $10 million expansion for research facilities at the lower level of the Integrated Sciences Building.

Other first phrase projects (the university calls them “enabling projects”) include a $22 million parking deck on Main Street, which would be east of the new business building about the site of the current entrance to campus from Main Street; the demolition of Terrace Hall and relocation of ROTC and fashion studios currently in the building; demolition of the Williamson House and its Carriage House and relocation of the Women’s Center; realigning Terrace Drive to Midway Drive; the demolition of the Cutler Building; and adding sidewalks and bike trails.

Warren said she’s excited that every college will be touched by the Master Plan by the end of the decade.

Faculty Senate member Linda Williams asked what would happen to the current Business Administration Building once the new one is built.

Warren said no decision has been made, but there are many options on the table.

Senators elected Pamela Grimm, an associate professor of marketing and entrepreneurship, as its new chair. She will succeed Smith.

Grimm said she hopes to focus on issues like financial pressures on the university; academic units and students in debt; technology and its role in higher education; “life-long learning” opportunities; and increasing demands placed on faculty during her term as chair.

Robin Vande-Zande, a Faculty Senate member and professor in the art department, will take over as vice chair. Senators chose English professor Ed Dauterich as the new secretary and Tracy Laux, a senior lecturer in the mathematical science department, as an at-large member of the executive committee.

The next Faculty Senate meeting is scheduled for May 14.