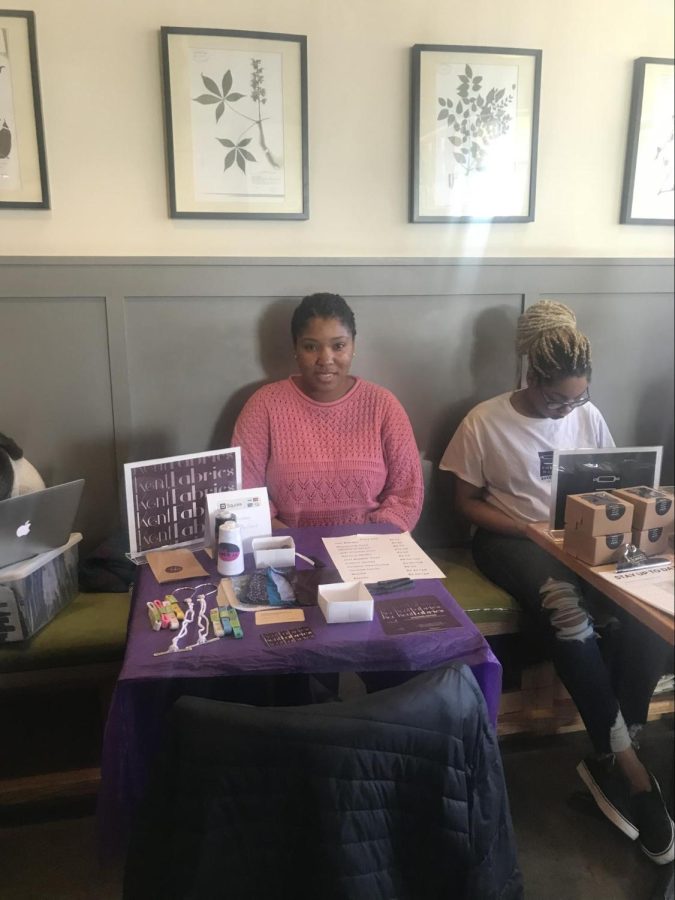 For fashion design students at Kent State, there aren’t many options when shopping for fabrics.

Senior fashion design major and founder of Kent Fabrics, Symone Baskerville recently decided to do something about the issue.

Baskerville said that in the past, when buying fabrics, she has paid for a Zipcar to take her to Jo-Ann Fabrics in Stow. However, after paying the fare to get there, Jo-Ann’s never had any of the faux furs, leathers or swatches she needed.

“Last year I vowed that I would never go back to Jo-Ann’s,” she said.

After attempting to buy fabrics in person, Baskerville decided to try ordering them online.

When ordering fabrics online, she came across the problem of having to pay shipping for her swatches and then pay shipping a second time for the yards of fabric she decided on.

“I’d have to go through and order swatches and get them shipped to me and have to pay for shipping the first time, then go back through that process to get the yards,” Baskerville said. “So I was like, ‘I’m done with this, I have to figure out a way to solve this problem.’”

Baskerville’s solution is Kent Fabrics. A fabrics store by students, for students.

After realizing a solution to the issue, Baskerville consulted with program panager at LaunchNET, Zach Mikrut about her idea.

Baskerville said that speaking with Mikrut about her idea really helped her understand her idea for Kent Fabrics could be a business.

Baskerville said after her LaunchNET advisor encouraged her to apply for the Idea Olympics and pitch Kent Fabrics to them, she finally did. And she won.

When Baskerville won first place at Idea Olympics on March 14, she received $2500 dollars toward Kent Fabrics.

Mikrut said ideas for businesses can be passion fueled or businesses that people are in need of. He thinks that Baskerville’s idea is both.

“Usually, when starting a business, there are two different ideas: ideas that you are passionate about and something that there’s a need for,” he said. “I think that Symone’s hits both.”

As a way to reach out and network her business, Baskerville participated in LaunchNET’s third annual Spring Pop Up shop.

The event gives entrepreneurs a chance to display their products and network at Tree City Coffee in downtown Kent.

Mikrut said he thinks that participating in the Spring Pop Up shop is exactly what Baskerville needs to do with Kent Fabrics in order to test the waters of her business.

“I think it’s awesome that she’s participating in the pop up shop,” he said. “It allows her to say ‘I’ve got this many students buying this and this is why I need a store.’”

Sophomore fashion design student Taylor Ginwright said she thinks Kent Fabrics is a great idea because it was created by students.

“I think the idea behind Kent Fabrics is amazing, because a student is the one running the business and she knows exactly what we need,” she said.

Ginwright said another great thing about Kent Fabrics is they are selling required tools that otherwise students would have to either go to Akron to buy or find a faculty member to get you one.

“Kent Fabrics is even selling necessary tools for students such as bobbins, bobbin cases and more,” she said. “Before this, you would have to find a staff member to get you one or go to Akron to purchase one.”

Baskerville said the main goal for Kent Fabrics is to one day open a physical store in Kent and that she has begun touring spaces for the future.

“That’s my goal actually [to open a store]. I’ve talked to a couple of different real estate brokers from Kent properties in downtown Kent,” she said. “The place I’m actually looking at is 250 South Water Street. So, that place used to be the old Huntington Bank. I got to tour that place before spring break. It’s actually really great, it’s really small, it’s only like 360 square feet or something, but you know, it’s something to start with.”

Abigail Miller is the Fashion reporter. Contact her at [email protected]