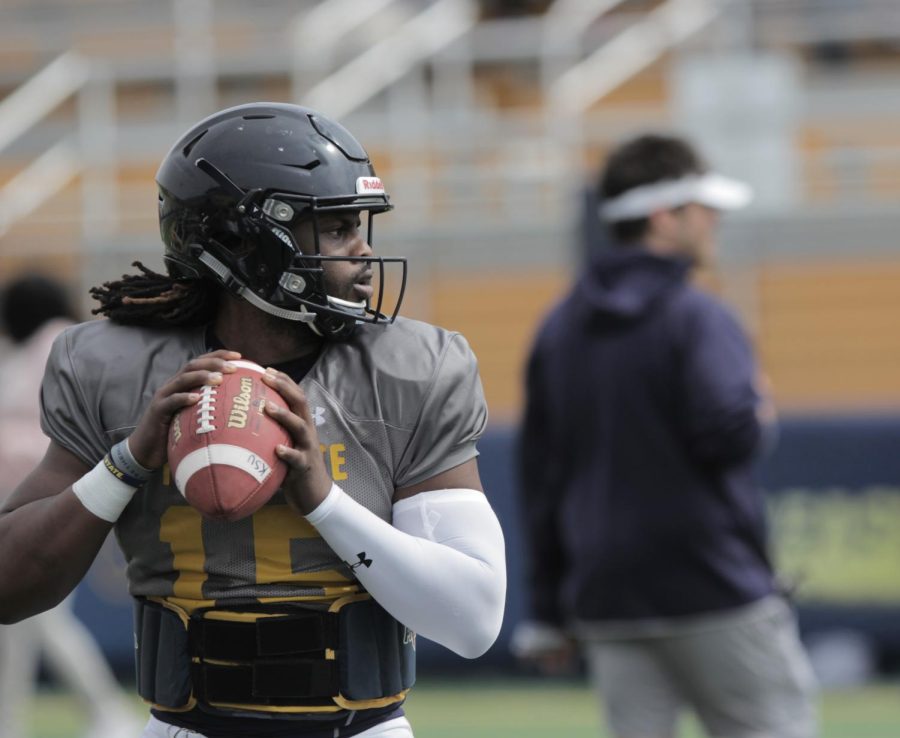 Flashes quarterback Woody Barrett drops back for a pass during a drill before Kent State's spring game on April 14, 2018. Barrett is entrenched in a three-way quarterback battle heading into the team's season opener at Illinois.

Defensive players were full of energy, jumping, shouting and chest-bumping each other all day. It started with a tackling drill where there was one ball carrier attempting to get by a defender. Defenders overwhelmingly won this drill, and play was often temporarily delayed due to defenders’ encouragements of each other. The defense shut down the offense early on.

Energy is something new coach Sean Lewis has preached since he took over as head coach on Dec. 21, 2017.

“We treat every day like gameday, so when gameday comes, and there happens to be media members, friends, family or fans in the stands, nothing changes about the day,” Lewis said.

After the individual drills, the team scrimmaged. The offense was led by a variety of quarterbacks: Sophomore transfer Woody Barrett split snaps, mostly with sophomore Dustin Crum, with freshman Pryce Taylor also taking some snaps.

“It’s a wide-open competition,” Lewis said of the current quarterback situation. “No one’s really separated themselves. Some guys have had really good days, and they come back, and they’re not really able to stack days together the way we want.”

Kent State’s passing offense was ranked No. 127 out of 128 Football Bowl Subdivision teams last season. Inconsistency and injuries were a big reason for their struggles. The Flashes started three different quarterbacks last season.

Crum and Barrett each showed flashes of solid quarterback play, as they both were able to lead the team into the end zone. Both quarterbacks felt comfortable taking matters into their own hands when plays broke down. Crum scored a rushing touchdown, and Barrett was constantly on the move.

The Flashes also saw contribution from junior running back Justin Rankin. Rankin struggled at times last season, as he was never fully healthy. However, during Saturday’s game, he showed a level of speed that had not been seen since his freshman campaign.

“I’ve got a lot of faith in my team this year; that’s for sure,” Rankin said. “They have made me a better running back already.”

The team has reinvented its offense, going with a much faster, uptempo pace under Lewis. The plays involve a lot of screens and quick snaps with a variety of formations.

“I love it,” Rankin said. “You get tired, but by the time the season starts, that’s not even going to be a problem.”

The defense played with a chip on its shoulder all day. At one point, it forced interceptions from Crum and Barrett on back-to-back plays.

Ever since Lewis took over the program, the offense has been the major talking point.

“You’re labeled as an offensive guy or a defensive guy, but if you ask our players, I’m a football guy,” Lewis said.

Senior Matt Bahr led the defense, constantly disrupting plays and making tackles when he was on the field. Bahr suffered an ACL tear last season in the team’s first game against Clemson that kept him out for the remainder of the season.

The defense won the scrimmage, which meant the offense was responsible for cleaning up Dix Stadium.

The team will take on Illinois of the Big Ten for its first game of the season Sep. 1 at Memorial Stadium in Champaign, Illinois. The Fighting Illini finished last year with a 2-10 record, including going winless in nine conference games.

Lewis is not concerning himself with that yet.

“Right now, our thought process is to win each and every day,” Lewis said. “That way, we have a chance to be competitive on that day. We are a process-oriented organization.”