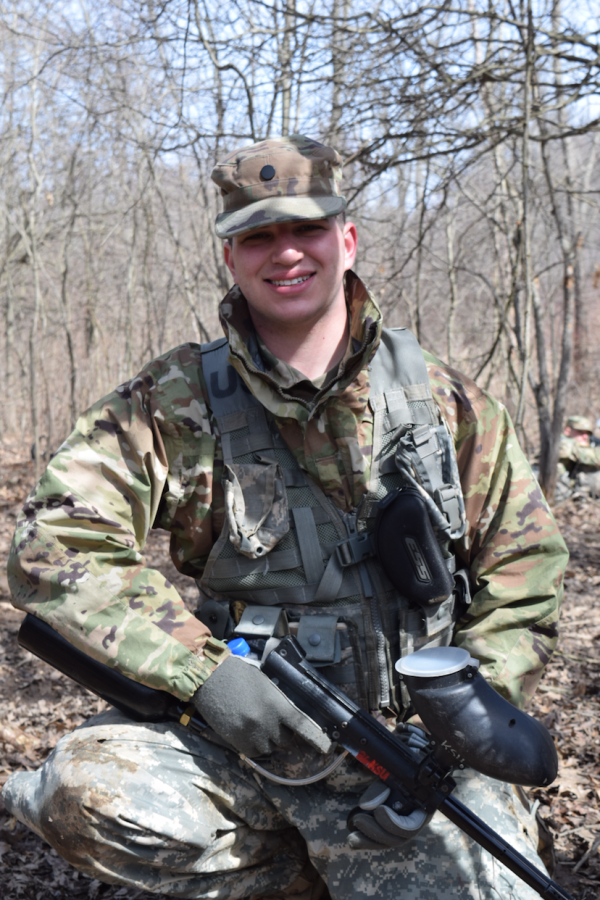 Kent State ROTC cadets spent the past weekend putting this year’s knowledge to use as part of Joint Field Training Exercise, also known as JFTX, at the Camp Ravenna Joint Military Training Center from Friday, April 20 to Sunday, April 22.

JFTX is an offspring of FTX, or Field Training Exercise, which cadets completed in the fall. It allows them to take the skills they’ve learned from the year and apply them in a tactical environment.JFTX primarily tends to junior cadets to prepare them for the training they have in the summer, which plays a role in the branches they want to be assigned to and the jobs they want to have.“Our main focus for this training exercise is to get our junior cadets, or MS-IIIs, prepared to go to Advanced Camp this summer. Advanced Camp is basically their crowning moment as cadets,” said David Brown, a computer information systems major and senior cadet. “They’re going to go and compete against every other cadet in the nation and do the best they can. They’re going to be evaluated for 30 days in Fort Knox, Kentucky, and all of those results are going to be compared against everyone else there with them.”Brown assisted in planning this JFTX. Thomas Ortman, an exercise science major and senior cadet, was the overseer of the entire operation.“It was a lot of work beforehand,” Ortman said. “It was probably about a 3 month planning process just to get this whole operation.”Ortman coordinated with other cadre and cadets to make sure the weekend went smoothly.“I’m just tracking with my counterparts here, my peers, all these movements, making sure they hit the times that they need to hit, briefing the missions when they need to brief and using up all the time for planning their missions, executing their missions, and doing an AAR, or After-Action Report, where they basically go over what happened during their mission and kind of get some feedback from the lead cadre,” Ortman said.The MS-IIIIs, or seniors, assisted in overseeing the training since most of them have already attended summer training. They helped run the Tactical Operations Center, or TOC, and logistics center where supplies were ran.Paige Cooley, a mathematics major and senior cadet, was in charge of personnel and rosters, which required her to keep track of how many people were there and what they were doing.“There are five platoons of trainees out here as well as MS-IIIIs who are hosting the training,” Cooley said. “Each platoon has two platoon OICs and each lane has two lane OICs — OIC is Officer in Charge, and those are all MS-IIIIs.”Kent State Army ROTC was also joined by John Carroll University, The University of Akron, Youngstown State University, and the Kent State Air Force ROTC detachment.“One of the big differences with Air Force and Army is exercises kind of like this,” said Adam Dangler, a senior aeronautics major and an Air Force cadet. “With the Army, they do more hands on stuff … while in the Air Force we get our technical training kind of after we commission and when we’re on our actual jobs.”The Air Force cadets seemed to enjoy being in a joint environment with Army cadets and getting to experience more hands-on training.“It’s a good time; it’s outstanding training, especially because back in Kent we don’t too much get to work in a joint environment with the Army,” said Dylan Bishop, a senior aeronautics major and an Air Force cadet, “so when we get to come out here, our cadets get to experience life more outside the field working with the Army, which our missions are two different missions that work together, so when we get to do something like this it’s really nice. We get to experience the other side.”Daniel Henderson, a public relations major and senior cadet, described a mission where he was platoon sergeant and Army cadets engaged with Air Force cadets in a mock ambush attack.The Air Force cadets acted as the opposing force so the Army cadets could have real people to engage with, Henderson said.“It was an interesting mission, our second one of the day, so the biggest struggle was still communication,” Henderson said. “It can be difficult overcoming a lot of the communication barriers that pop up between schools because it’s different schools, different trainings throughout their lives all coming together … We ended up accomplishing the mission. It went well, and it was a lot of fun because Air Force kind of pushed back a little bit.”Overcoming the communication barriers between the different schools was one hurdle all cadets had to jump through, but also one of the learning objectives.“Getting used to being with other people besides the people at your school helps us get used to the atmosphere,” said Alex Spangler, a junior cadet and respiratory therapy major from The University of Akron.Learning how to work together as a team and adapting to people from different backgrounds with different personalities is one of the most important takeaways for juniors to prepare for summer camp where they will be around cadets from all over the United States, Spangler said.The cadets spent 2 ½ days out in the wilderness, and though many agreed that the cold weather they had to sleep through was probably the worst part, they all got a chance to experience hands-on training with other cadets.“… Things are starting to jive, so it’s gotten really fun,” Henderson said. “You start to know everyone in your platoon, and you start having a really good time out here. We’re out here doing what we signed up to do, getting some of the best training we can get.”

Mariah Hicks is the military and veterans reporter. Contact her at [email protected]